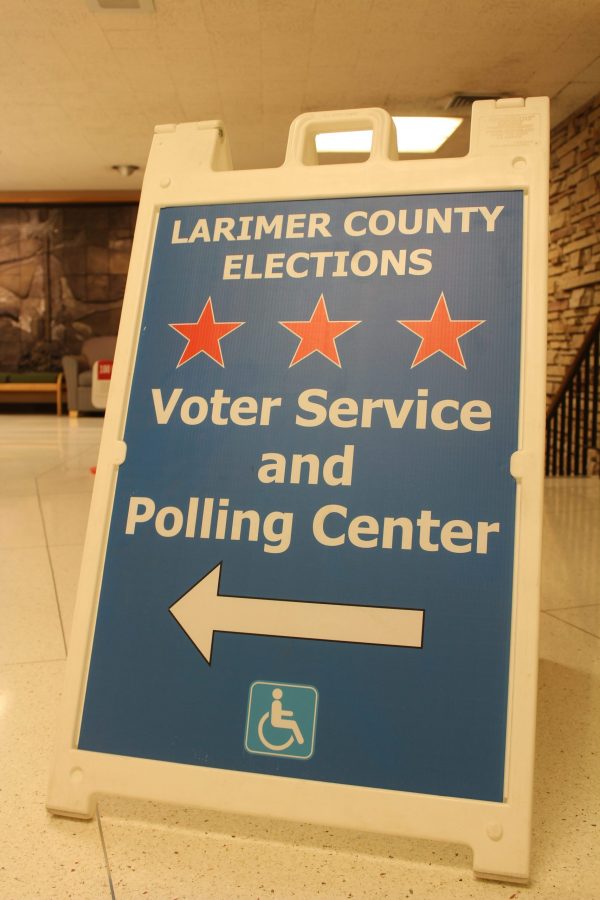 A sign for the Larimer County Elections points voters to the North Ballroom in the Lory Student Center. Election day is on Nov. 6th and voting/ballot drop off in the LSC can take place until 7pm on election day. (Matt Begeman | Collegian)

Election day is upon us, and the tireless efforts of New Era to get students registered to vote are finally going to come to fruition.

Not only did New Era relentlessly promote voter registration to the students of Colorado State University, they encouraged us to send our ballots to Fort Collins. This makes it easier for us to vote and increases the likelihood that we will make the effort to vote.

New Era told us to send our ballots to Fort Collins, but they did not inform us that our Democratic votes are not going to make much of a difference here.

CSU’s campus and the City of Fort Collins in general is more Democratic and unaffiliated than Republican.

We sit in Colorado’s second congressional district, which is made up of the counties of Boulder, Broomfield, Clear Creek, Eagle, Gilpin, Grand, Jefferson, Larimer, Summit and Park. This district has not voted Republican since 1972.

The truth is students who vote Democrat could have made their vote matter more by keeping their ballots at home and voting in districts where the race is closer.

For example, a poll released by the Coffman Campaign revealed that in Colorado’s sixth district, Democrat Jason Crow is only one percent ahead in the race against Republican opponent Mike Coffman. For Democratic students who have a home address or mailing address in the sixth district, their vote could have made a serious difference.

Seeing New Era on campus probably makes a lot of us excited to vote for what might possibly be the first time.

And we have done exactly what they told us to do.

According to Ballotpedia.org, there are more Republican counties in Colorado and only four pivot counties. This means that these four counties voted for Barack Obama in 2008 and 2012, but voted for Donald Trump in 2016.

gain, for students who live in these districts, their vote could have made an impact in swaying their county.

If students know where their vote is going to make the most impact from the start, they will have time to either go home and vote, or have family members send their ballot to them.

It’s true that New Era should not ask students where they’re from, or encourage them to vote in a certain district. However, New Era can provide information about more than just local candidates and how to register.

They can provide students with information about districts, parties and voting history without necessarily encouraging anything.

This year, students and young people are voting more than ever before, and we should all applaud and thank New Era for helping us get our voices out there.

But if student voting is skyrocketing, then we should take advantage of our unique ability to vote in a different district if our votes are not beneficial to our party in Fort Collins.

New Era has told students that voting is how we voice our opinions, but they failed to mention that where we vote is how we are heard.