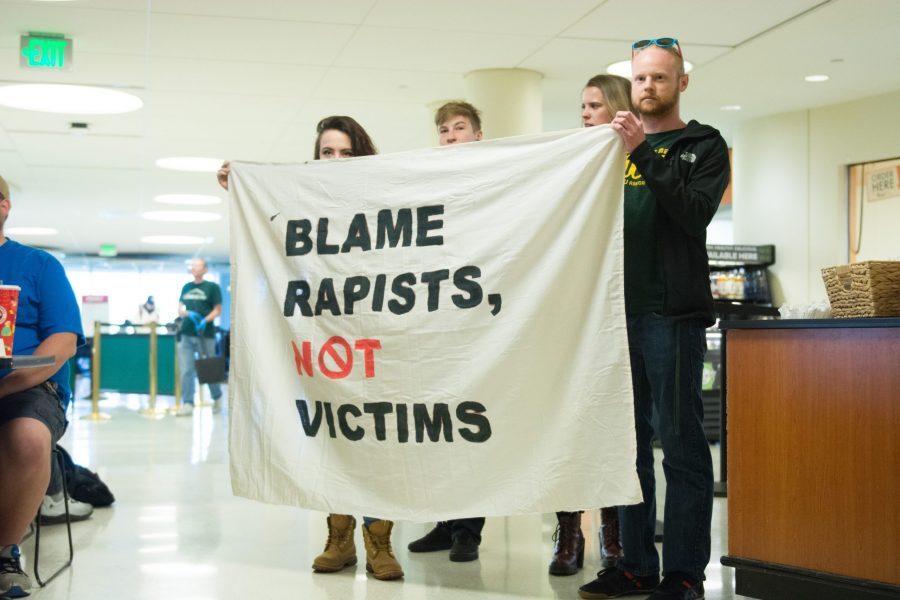 The Women and Gender Advocacy Center at CSU holds a silent protest for Sexual Assault Awareness Month on April 25. During the protest, participants held banners and walked through the Lory Student Center and Plaza while expressing messages such as “we deserve a rape free campus.” (Colin Shepherd | Collegian)

If we are to understand how rape cultures can be perpetuated, we must grapple with the fact that many parts of society largely ignore male victimization.

This is not to say that victimization of women, queer, trans, and non-binary folks has been sufficiently understood. In fact, we are light-years away from having widespread, mature and vulnerable conversations about sexual violence and misconduct.

But in order to get to the point where we can speak bravely and think critically about this topic, we must recognize that men have been systematically and socially ignored as victims of sexual assault.

Given the fact that men are still the primary perpetrators of all violent crimes, as reported by the Center for Disease Control and Prevention, it falls upon men to shed light upon what we are doing to ourselves and others.

Historically, men have not been regarded as possible victims of rape. In fact, up until 2012, the FBI definition of rape was, “The carnal knowledge of a female, forcibly and against her will.”

Archaic in language and in outlook, this definition reflects something deeply problematic about our culture. It reveals that while men could be regarded as victims of violent crimes they were categorically excluded from being thought of as victims of rape.

Definitions like this reflect the fact that sexual assault and rape were understood as gendered issues. To be a man and to be sexually assaulted by another man was not just rape, it was sodomy. Sodomy laws, are a class of laws concerned with “crimes against nature,” according to the American Civil Liberties Union.

The classification of male sexual assault as sodomy instead of rape shows that the primary issue of concern was not the violation of one person by another but the transgression of a moral taboo.

This is why sodomy laws not only stigmatize queer folks but also shift the conversation of male victimization from a criminal issue to a religious one.

While rape was certainly regarded as something illegal and wretched, a man being sexually assaulted by another man was viewed as a “crime against nature.”

With the gradual fall of religiosity in the West and the increasing secularization of the law, the notion of sodomy is now being contested. This process has begun to reveal the need to begin treating the victimization of men by other men not just as a theological issue, but as a criminal issue of the same nature as the victimization of women.

Male victimization has not only been ignored or reclassified governmentally. In society, many do not take men seriously as victims of sexual assault. In fact, men are taught from a young age that their victimization should be glorified.

Young men are socialized to only consider themselves active and willing, participants in all sexual encounters. Hofstra University professor Charol Shakeshaft states that our society, “doesn’t really code sexual exploitation of (men) by a female as very serious.”

This means that male victimization goes under-recognized and under-reported, in part, because men do not view themselves as victims.

New York Times Bestseller and radio personality Charlamagne tha God expressed as much in a 2018 episode of TV One’s “Uncensored.” Charlamagne states, “I was molested when I was 8 years old by my cousin’s ex-wife. I didn’t even realize it was something wrong.”

Accounts like this are all too common among men who often do not realize that they have been victimized until decades after the fact.

In order to combat rape culture, we must first be able to identify it. Without grappling with the history of disregard towards male victims of sexual assault, we cannot expect to adequately understand why men continue to under-report their victimization.

Understanding the ways in which this population has been left out of the discussion is a way of legitimizing the voices of those who have, for so long, been living in silence.