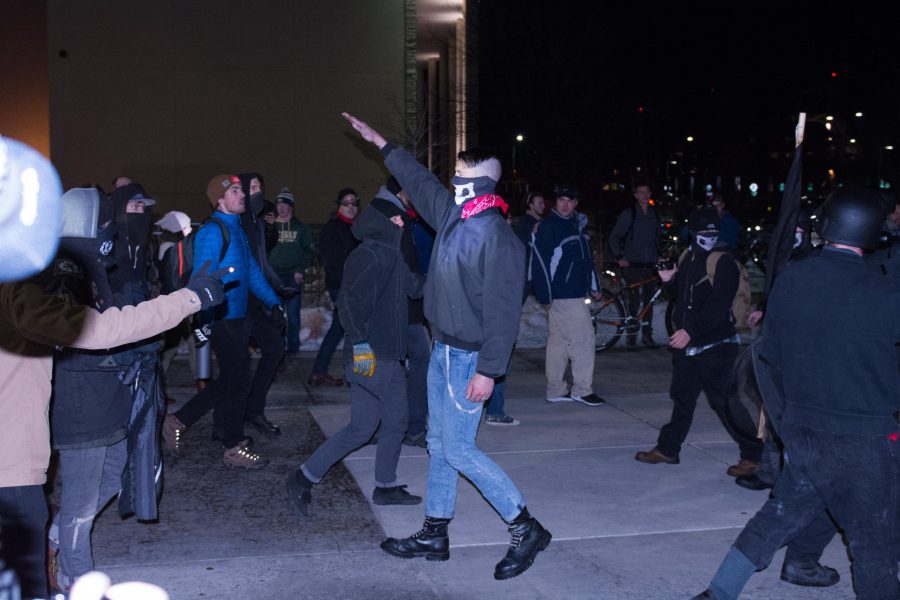 Neo-Nazis throw up the nazi salute during a clash with Antifa following Charlie Kirk's presentation in the Lory Student Center Feb. 2, 2018. Kirk is the Founder and President of Turning Point USA, a conservative non-profit organization. (Colin Shepherd | The Rocky Mountain Collegian)

If the political right wants to root out the racists in its midst, it must first start with unequivocally condemning and abandoning identity politics. This is the ideology on which far-right groups thrive. If there is to be hope for political and social reconciliation in this country’s future it must start with letting go of the tribalism that continues to fester and breed hate.

Identity politics can be understood as the promotion of policies specific to one segment of one’s identity at the expense of other people. These are the principles that far-right groups value, a clear and deliberate us vs. them mentality with race at the center.

While this may seem benign, it often turns from bigotry to violent and genocidal tendencies when in the hand of right-wing extremists. The Proud Boys, for instance, describe themselves as “Western Chauvinist” on their website, and appeal to a bygone era when “girls were girls and men were men.”

While not explicitly a racial organization, the proud boys are a patriarchal club for young men in a state of arrested development. It is an organization that champions an ethic of Western exceptionalism and complete disregard for the atrocities that were implicit in European expansion.

The concern of this organization extends only to the traditional American man, the White, Anglo Saxon Protestant hero of a bygone era whose privilege is now in jeopardy. It is an increasingly globalized world in which power roles are beginning to reverse that this organization is violently rebelling against, rallying the last line of defense for a white man’s world.

This dream of a world in which the distribution of power is still firmly in the hands of White men is the crimson thread that holds together the abominable patchwork that is the alt-right. It is the goal most praised by alt-right leaders such as Richard Spencer who the Southern Poverty Law Center reports as having espoused hopes for an “ethnostate that would be a gathering point for all Europeans.”

The same hollow questions are repeated over and over by those who sympathize with these far-right organizations: Why is there a black history month and not a white history month? Why can’t we have our own white student union? Why is it that every group can put themselves first except White people?

What those who ask these questions ignore is that there are answers readily available to them if they would only listen. There is no White history month because White people were never systematically excluded, trivialized and ignored when it came time to take account of who had contributed to the world. There is no white student union because most universities in the West are predominantly White both in students and administration, ensuring that their voices are heard.

The is a reason White people cannot put themselves first and consider only their interest the same way minoritized people do. This is because Whites possess a systematic and institutionalized privilege that grants them powers not available to others. With power comes responsibility, and one cannot responsibly think of the future of any group while only considering the powerful and the visible.

With power comes responsibility, and one cannot responsibly think of the future of any group while only considering the powerful and the visible.

Right-Wing identity politics cannot be an option because at best it is likely to lead to a traditionalism that holds in bondage those who have historically been subject to the will and whims others. At worst, it paves the way for atrocities which the world is all too well acquainted with.

It is the spirit of extreme right-wing conservatism mixed with a racialized political outlook that produced the atrocities of the Holocaust.

We are just days removed from what is being called the deadliest attack on Jewish people in U.S. History after 11 people lost their lives in the Pittsburgh Synogouge Shooting. It may be time to stop and think about where certain ideas tend to lead people.

Identity politics is a doctrine of exclusion and self-interest that becomes particularly corrosive in the hands of the far-right. Therefore, reasonable conservatives must come out and take an unabashed stance in opposition. It is the duty of the right to be on the front lines when it comes to stopping the extremist in their midst.