Editorial: It’s time for a woman to lead CSU 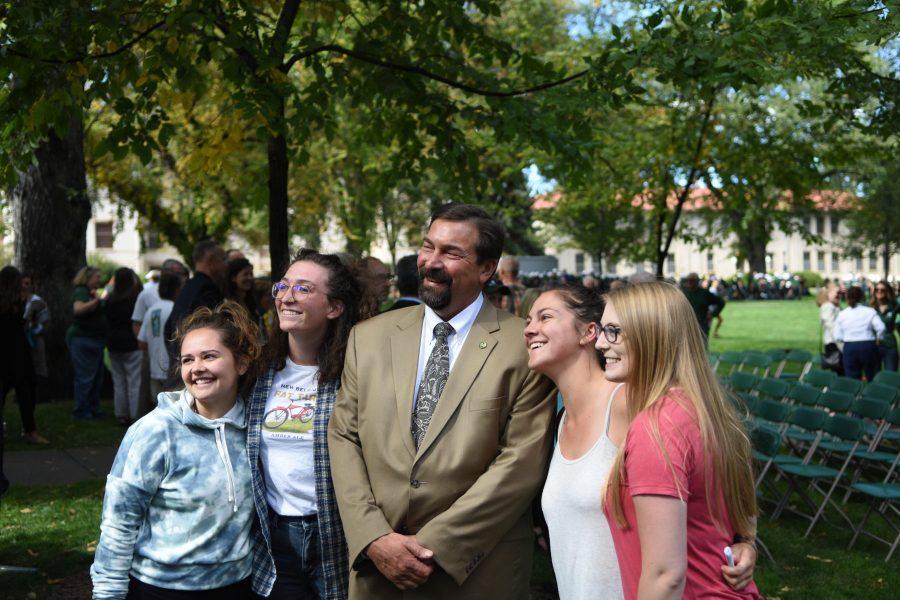 President Tony Frank takes a photo with students after the annual fall address. Frank announced this week that he will be stepping down as President this summer and take on a position as full-time Chancellor of the CSU System. (Matt Tackett | Collegian)

Editor’s note: This is an editorial. Editorials do not reflect the view of all employees of The Collegian, but instead represent a stance taken by The Collegian’s editorial board, which consists of the editor-in-chief, the managing editor, the digital production manager, the news editors, the opinion editor, the sports editor and the arts and culture editors.

Colorado State University President Tony Frank announced Sept. 30 he would be stepping down from his role to become the full-time chancellor of CSU.

As the University administration searches for the next president, The Collegian Editorial Board feels that it’s time for a change. It is time for a woman to lead CSU.

For CSU to properly reflect all the voices of the student body, it is time for a woman to lead CSU.

The University has had 14 presidents since it started in 1870, all of whom have been men. To uphold the CSU’s commitment to excellence and inclusion, it is time the University begins to acknowledge the many capable and qualified women to fill this leadership role. Our University would benefit from the diversity and difference in perspective a female leader would offer.

Even in administrative positions at the University, women are underrepresented.

Of the 15 members that sit on CSU’s Board of Governors, six are women and three of those women have voting rights on the Board.

Of the 2,626 employees in the CSU Administration for the 2018 fiscal year, 52 percent are women, according to CSU’s Institutional Research, Planning and Effectiveness.

It’s important to recognize we’ve had a male perspective from leadership for the past 10 years, and for the entirety of the University’s history, so we could do with a change. In the age of #MeToo, we have seen as a society a sore need for women to shatter glass ceilings.

And in many ways, women are shattering those glass ceilings every day in higher education. For example, our University is comprised of mostly young women, despite the fact that our presidents have been male throughout CSU history.

There are prominent schools with female presidents, though not nearly as many as those with male presidents. A notable example is at Brown University, where Christina Hull Paxson serves as president. But a quick Google search of Paxson reveals the second most searched term for her is ‘christina paxson husband’ typifying the need for women leaders to be taken more seriously.

That kind of progress is only made when more women are selected to be leaders.

It’s important to note that CSU is somewhat behind the curve in Colorado on selecting a female to lead.

These are female university presidents in Colorado that are doing great work, and our state institutions are better for having their female leadership and their visions. Each of these women has publicly noted the importance of looking out for female students and minorities.

To stay competitive when three other prominent universities in the state are benefitting from woman leadership, it’s time we seriously considered the ways CSU could benefit from a woman at the helm.

According to a study by the Harvard Business Review, women are more likely to seek out opportunities to learn and improve throughout their careers. That style of leadership would greatly help our University reach its lofty goals, especially as they pertain to diversity initiatives.

Like many higher education institutions, CSU champions itself as a pioneer and promotes diversity, and it has attempted to make strides towards fixing its downfalls.

To stay competitive when three other prominent universities in the state are benefitting from woman leadership, it’s time we seriously considered the ways CSU could benefit from a woman at the helm.

A 2015 report brought to light major gender pay discrepancies between male and female faculty members, with males making up to 16 percent more than their female counterparts. Since then, with salary adjustments and the help of committees, the pay gaps have been substantially narrowed.

But the University needs to take it a step further.

Making an effort to have a woman serving in one of the highest positions on campus would show that we as a community, and as an institution, are dedicated to representation and equality. At CSU, we do not view leadership as a quality exclusively held by men.

Today, it’s more important than ever that women on campus feel validated and heard by the University administration.

And we feel that it’s time for a new chapter at CSU.

The Collegian Editorial Board can be reached at letters@collegian.com or on Twitter @CSUCollegian.