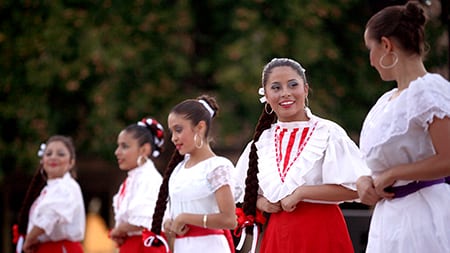 Danzantes Folkloricos from Fort Collins celebrate El Grito by performing traditional mexican dances on the Plaza Friday night. El Grito de Dolores is a holiday on Sept. 16 that honors of the cry for independence by Miguel Hidalgo y Costilla which sparked revolution in 1810.

Latinx/Hispanic heritage month is from Sept. 15-Oct. 15 to celebrate the culture and contributions that Latinx and Hispanic individuals have made in America.

The Latin culture is beautiful, vibrant and should not only be celebrated by the Latin community. It is a time to show appreciation and respect for the Latin/Hispanic culture and influence in America and celebrating the differences and similarities between Latin groups.

It is a great time to both celebrate and be proud of one’s Latin background and to recognize all Latinx identities, while also acknowledging issues like colorism and prejudices in our communities.

Hispanic is a term used to focus on the Spanish culture and language originating from Spain and Portugal.While Hispanic can be used to encompass Spanish speaking countries in Latin America, Latinx focuses on the geographic location instead of the language.

There are 32 Latin countries. That is 32 different flags, 32 different historical backgrounds and 32 different Latin experiences in America. Many Latinx people are improperly generalized as just Mexican. It is unfair to categorize everyone under one country and replace their identity and experience due to a generalization.

Latinx individuals do not and will not fit one type of physical description. There are white-passing Latin individuals, brown individuals and black Latinos as well.

I was born and raised in Mexico until I was four, and growing up I was always told that I did not look Mexican enough because I was so pale. Even though I have dark hair and eyes, I did not fit the cookie-cutter description of what a Mexican individual should look like. Growing up I was told I was not brown enough to be considered Mexican and was perceived to be white.

Even though people who are fairer skinned are not seen Latin-enough, there is still a privilege and preference for fair-skinned Latinx individuals.

Latinx individuals that are darker and have indigenous resemblance are usually seen as less than or not treated with respect. This is both prevalent in America and in majority of Latin countries as well.

In 1492, Columbus landed in Cuba and by 1498 he claimed South America as Spanish land. Columbus brought with him men which settled in Latin America.The indigenous people of Latin America were forced into slavery, were massacred and indigenous women were raped. Through this, the mix of Spanish and Indigenous blood began.

Those who were born and had indigenous and white backgrounds were labeled as mestizos. Mestizos who were fairer skinned were treated with more respect than those who looked more indigenous than white. This is where colorism in these communities began.

I witnessed colorism with members in my family. A great example is when I compare my experience shopping for quinceañera dresses to my sister’s.

When I walked into dress stores in Mexico the owners would say, “Try anything you like,” or “Any color you choose is perfect, its your day!”

With my sister, who has darker brown skin, she had a much different experience. When she walked into a store she would be rushed to a certain area of the store and be told, “Lets stick to lighter colors, because bright colors do not look good on you.”

Growing up, I was never limited to what color clothes I could wear or what shade of lipstick I picked because “anything looked good on me”, while my sister had restrictions put on her because she was darker.

This is a subtle but great example of colorism, and can grow into larger forms of discrimination.

One way to combat colorism is to acknowledge Afro-Latin identities in our communities as well. Afro-LatinX is an term used to identify an individual who holds both African and Latin backgrounds; it is identifying black racially yet having a Latin ethnic background as well.

Afro-LatinX people are sometimes forced to pick one identity whether that is being Black or Latino. Afro-Latinos also experience discrimination from both ends by not being black enough for the black community or being too black for the Latin community.

Celebrities such as Amara La Negra have started speaking out about this issue. On the show Love and Hip Hop Miami, Amara La Negra was told she was too black to be a Latina.

She has spoken out on how it is unfair to not be considered Latina simply because she is black and doesn’t fit the description of what a typical Latina looks like.

I am proud to identify as a Latina and I know many others who are proud as well, but this does not mean our pride should lead us to ignore the issues in our community. We should use this month to celebrate our culture as well as be mindful of where we can improve.

Kenia Ortiz can be reached at letters@collegain.com or online on Twitter at @Kenia_Ortiz_