Hodge: We can appreciate both the military and the kneeling movement 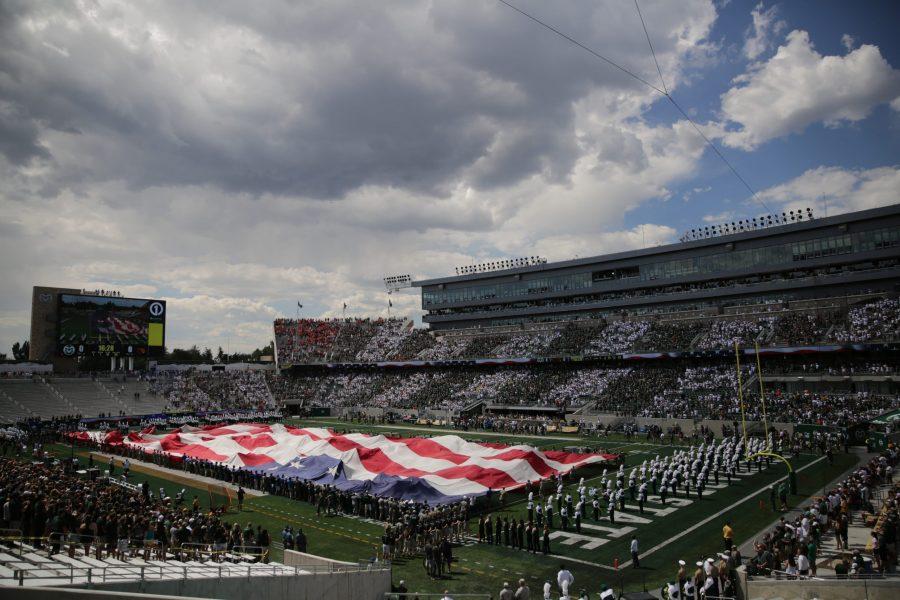 A football-field sized American flag is unfurled before the start of Colorado State University's first football game of the season against Oregon State, on Saturday, August 26th. Forrest Czarnecki | The Collegian

Football and the military have been torn asunder and are now topics of a strong political debate, but this weekend they come back together as we celebrate our servicemen and women when Colorado State hosts Arkansas in the university’s official Military Appreciation Day.

After Nike’s announcement that Colin Kaepernick, former Mountain West conference and NFL player who started the kneeling movement, would be starring in their new line of promotions, the debates around kneeling, social justice and regard for our military have sparked back up.

Football players kneeling during the national anthem and the debate around if it is disrespectful to our servicemen and women has polarized people so much that some can not see that they are by principle, interconnected.

We must change the discourse around this subject. Instead of letting this issue divide us, we must let it unite us. As a people, football is an American past time. A game of endurance, strength and unity. It opens the door to opportunity, a founding principle of the land. It’s a game that has defined us as a nation.

Thank you to the servicemen and women, of the past and present, that have risked everything to make sure our liberties are protected and upheld. Thank you to the people working every day, social justice activists and those in similar career fields that are making sure their sacrifices were not in vain but are applied to all.

Our servicemen and women work to defend our nation and we must work at helping it improve. Kneeling is not out of disrespect, but out of dedication and a motivation to promote justice, something we as a nation hold ideal.

Bo Shonka, a prior service airman and CSU student who supports kneeling and understands the misunderstanding of the protest believes patriotism can be displayed in many ways, not just service.

“A true aspect of patriotism is when it is performed in sacrifice rather than personal benefit. To stand up for what’s right is a stronger example of patriotism than doing it because it’s easy or expected,” Shonka said.

Everything our servicemen and women do is out of a desire for our country to reach our maximum potential. This potential cannot be reached until we recognize and deal with our downfalls; one being the mistreatment of racial minorities and marginalized peoples.

There is a false connotation that those who do not serve are not as aware of the sacrifice that goes into honoring the flag, or that those in from diverse or multicultural communities do not have the same dedication to this countries principles.

According to Pew Research Center, racial and ethnic minority groups made up 40% of Defense Department active-duty military in 2015. Many people of all races have tight connections and bonds to the military.

Kneeling, and any form of peaceful political protest, should not be seen as a sign of disrespect but as a gesture of support. America has always been and will continue to be a place where the citizens have a right, if not a duty to remain critical of our governance and call out injustice.

We can fully support both sides. Those against injustice and our servicemen and women. Social justice and the love of football belongs to no singular race, religion, or creed and neither does patriotism.

Social justice and the love of football belongs to no singular race, religion, or creed and neither does patriotism

Patriotism is not just caring of the lives of those in our military, but the lives of all Americans. To not care of issues that marginalized identities face, is to not truly love America and its diverse peoples.

It’s is only fitting that football has been used as a platform to help spread awareness and promote conversations in this country. When Kaepernick and other players kneel, they do it with the same intentions as those who serve: out of love for their countrymen.

At the end of the day, when you look at both sides of the kneeling debate, both sides are angry over the loss of someone.

It’s Black Americans and other minorities that are subjected to injustice, brutality and blood spilled in the streets and the service men and women who bravely protect and bleed for the country. It’s the blood of us as a nation, and we must not let a difference of perspective divide us on issues of humanity.

Whether it be the social justice workers putting in the work every day, or members of our military serving proudly, the goals are the same; one nation with liberty and justice for all.

Jayla Hodge can be reached at letters@collegian.com or online at @Jaylahodge.