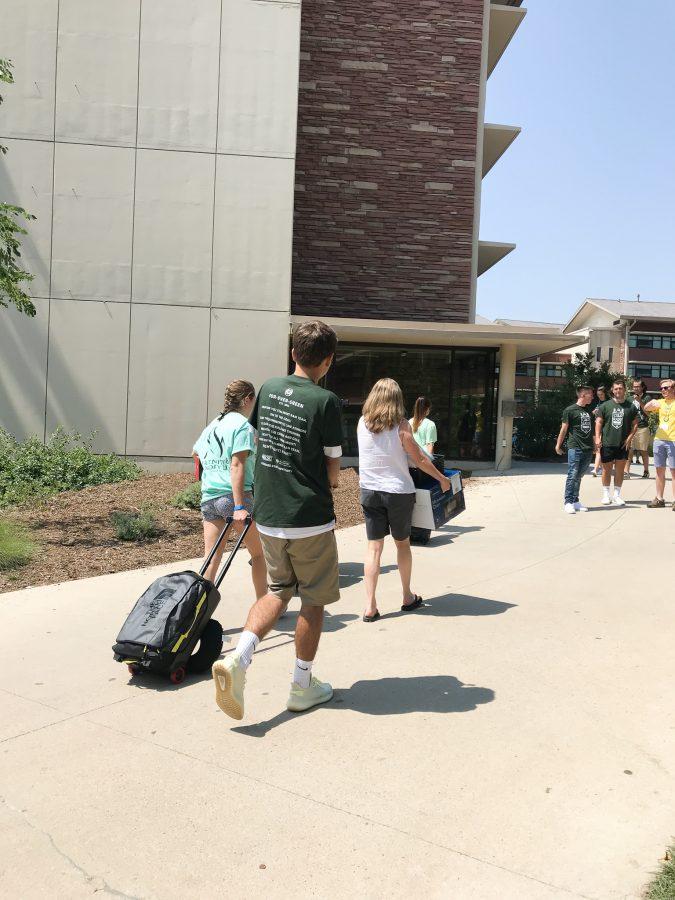 Editor’s Note: All opinion section content reflects the views of the individual author only and does not represent a stance taken by The Collegian or its editorial board

For many, college can be a greatly anticipated time of freedom and exploration. No longer under the watchful gaze of one’s parents, it is possible to authentically and independently explore what it means to be oneself. To many others coming to college feels much more daunting and it is perfectly normal to feel overwhelmed. It is okay to be afraid.

“courage (is) not the absence of fear, but the triumph over it” -Nelson Mandela

Many first-year students fear similar things: being away from family, increased responsibility, fitting in and finding a group of friends. Fourth-year animal science major, Maddie Bloom remembers her own share of difficulties coming to Colorado State University.

“My parents dropped me off and then drove 800 miles home and I was here alone,” Bloom said. “It was a lot to make new friends and get integrated into college.”

The struggle to cope with practical matters while wrestling through feelings of isolation is an issue that many students deal with. It may feel strange that one can enter a university of tens of thousands and still feel terribly alone.

The first year of college can also be a time to confront issues that are important and personal. According to a study published in the Journal of Social and Behavioral Sciences, first-year students are in a “vital moment of transition and adjustment,” where there can be a high presence of “symptoms related to existential identity and decision making.” Many first-year students are just trying to find answers to that perennial question of “Who am I and what should I do?”

A time when one is old enough to go to war and yet too young to drink; mature enough to pay taxes yet not responsible enough to rent a car. Both empirical data and personal experience appear to agree on at least one thing: college is a confusing, exciting and frustrating time for nearly everyone involved.

So it’s okay to feel anxious about college, half of the students deal with the same issue. It might as well be considered a “rite of passage.” It is okay to feel alone starting out in a new place, with new people, new foods, new bills and a newly found appreciation for caffeine.

It is perfectly normal to feel underprepared, overworked, outclassed, insecure, anxious, nervous, out of place and unwelcome. College is not just the freshman 15 and overhyped parties. It is more than awkward introductions, heartbreaking goodbyes and secretly despising the person who took your unofficial assigned seat.

For about one in three people, college is the time when they meet the love of their life. College is a time of potential and opportunity, a chance to become articulate and powerful in a way that few have the privilege to pursue. It is a time to let go of one’s childish ways, and develop a new and mature identity as someone of competence and creativity. It is a time to become more than what you are and to confront the world in all of its terrible splendor.

If you are freaked out about beginning your career in higher education do not worry.  At the end of his senior year of high school, first-year student Sam Gruenhaupt recalled feeling like he had to “buckle down and figure out what I want to do.” Sam said he dealt with the anxiety about starting college by “deciding to stop worrying so much because I realized it was going to happen and there were a lot of people here to help me.”

Data shows that his experience is strikingly similar to that of many other students entering university, and there are resources available to all those struggling to make sense of this new period in life.

Student Diversity Programs and Services offices offer students of different racial, ethnic, and ability-related identities a place to meet people like themselves and build community. The Career Center can assist students in finding work, polishing their resumes and thinking through what exactly they can do with their degree.

Resident assistants are available in the residence halls to assist new students in finding peers, managing challenging course loads and exploring ideas they may be confronting for the first time. The new CSU Health and Medical Center is available to meet a plethora of student medical needs without having to leave campus.

The first year of college is uncharted territory. It’s a wild new expanse to map and explore. It is a chance to chart out one’s destiny and bring it to fruition. That’s a frightening thing, and maybe that is okay. As Nelson Mandela once said, “Courage (is) not the absence of fear, but the triumph over it.”