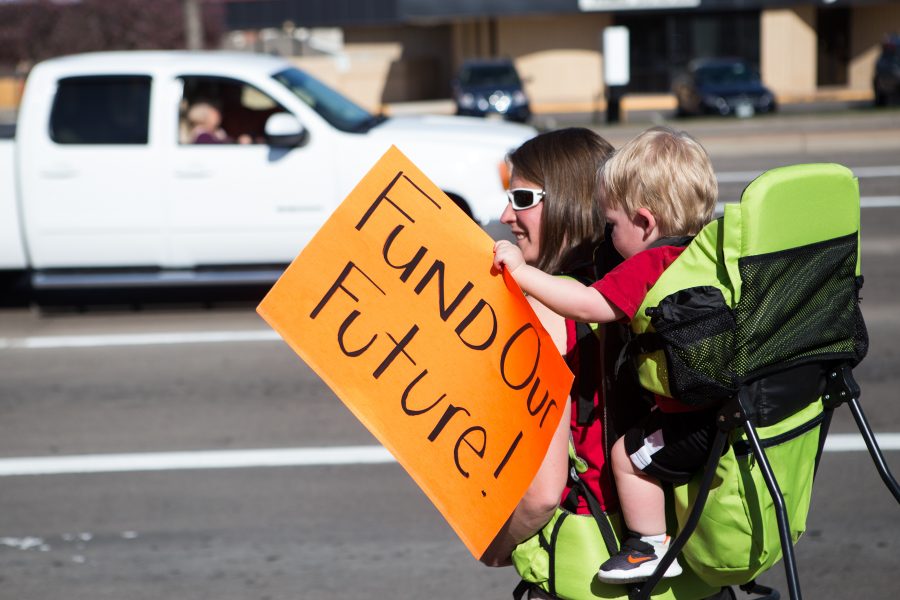 Amy McLean and her son Everett showed support for their cause during the protest on Friday, April 27. She said they were both there "to represent the underfunding [of teachers] in colorado and hopefully get fully funded classrooms as soon as possible." (Josh Schroeder | Collegian)

Arizona, Colorado and numerous other states have seen a surprisingly large-scale movement from public educators over the past few weeks. Educators are demanding more funding from the state for pensions plans, higher wages and more money for use in education.

The relatively low teacher wages in public education are common knowledge, so much so that it’s often a cultural joke. Anytime anyone says they want to be an educator, the first impulse reaction is usually a question or joke directed at the low wages.

Public service in general tends to be a thankless task. Erratic hours, unpredictable outcomes, unstable availability of funding and low pay are just a few perks of pouring one’s heart out into a project designed to benefit the community.

Teaching is just another example. The frustration at the lack of action has manifested itself into marches and demonstrations at state capitols, forcing lawmakers to address the issues of funding, or lack thereof.

The expansion of the pay package for educators is something to absolutely support, but the movement itself needs to address specifically what it wants and how lawmakers should get it there.

Colorado especially finds itself in quite a bind. Teachers are asking essentially for more funding from the state government. This going to be very hard for lawmakers to do, as Colorado is a TABOR state. This is totally unique to Colorado, and means essentially that according to state law, no new taxes can be passed that hasn’t been voted on by the citizens. Not passed by the citizens, not written into law.

Colorado spends around about $9,245 per student, which is quite low compared to national averages. Colorado also spends around $9 billion dollars on education annually, which makes about 25% of its $36 billion budget.

Colorado, unlike any other state in the union, is really going to struggle to pass tax increases to fund what teachers are asking for. The movement needs articulately outlined policy goals, based in numbers, with tangible demands that lawmakers can actually work with.

The movement is well-intended, and while public education is an indispensable commodity, it doesn’t help lawmakers make decisions if the demand is simply “more funding.”

It isn’t that the government doesn’t want to help. They definitely don’t want their teachers vacating classes en masse. They would ideally like to fund public schools to the extent of their ability. But money is a finite resource. They have other needs, interests and goals in mind, and the budget isn’t something they can just rework on a whim to distribute more money into education.

However, were the Teachers’ March to pose a realistic, tangible plan for any sort of revenue gain or cost cutting that lawmakers could work with, the situation could be dealt with much more efficiently, with as much gain as possible to both the state and to the public educators.

At the very least, the Teacher’s March needs to give a solution to getting around TABOR. Like it or not, no tax increase is getting passed if it isn’t voted on by the citizenry. This is by far the largest obstacle facing an increase in expanded funding.

If they can propose a work-around to TABOR and get a tax increase passed, then the prospect of receiving more funding, pay and state backing is much more likely. But if the Teacher’s March merely protests on the platform of higher taxes and more funding, it is equally likely that the State inaction will continue.

For the movement to succeed in its goals, the Teachers’ March movement much have some hand in drafting a policy solution.

Ryan Tougaw can be reached at letters@collegian.com and online at @rjtougaw