Tougaw: Recognize the benefits of fracking 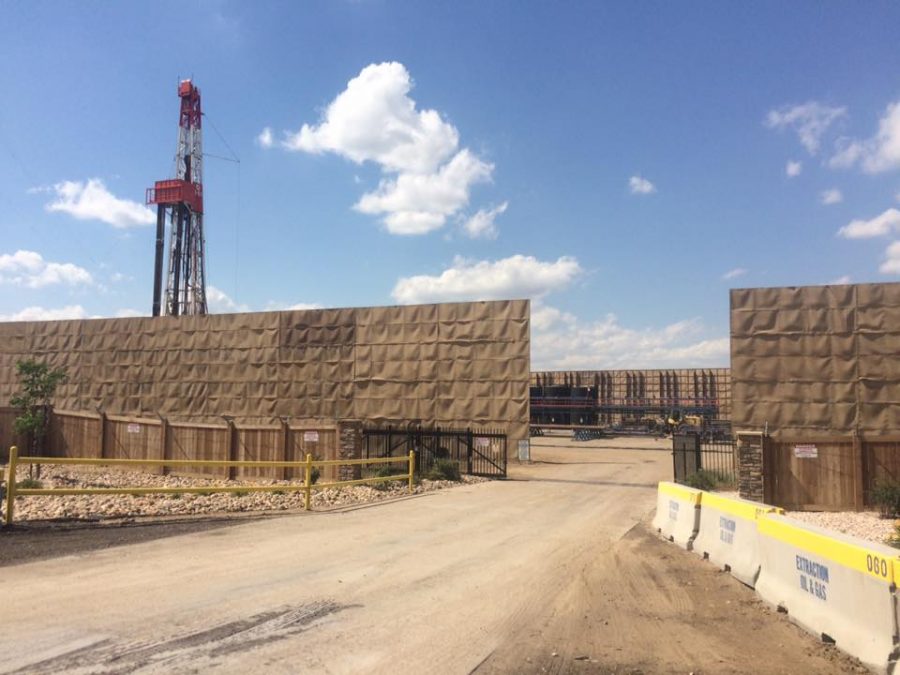 A fracking site in Greeley, significantly smaller than the proposed project at Bella Romero, just hundreds of feet away from a playground.

Fracking gets a lot of heat in Colorado. A Google search of “fracking” will yield all kinds of results about what it is and why it’s controversial. However, despite the conflict, fracking has many benefits that often go unnoticed by those calling for its removal.

Hydraulic fracturing, shortened to fracking, is a process to release oil and natural gas from deep underground by injecting a high-pressure mixture of water, sand and chemicals into the rock to release the gas from inside.

Colorado’s industry is neither unregulated, nor is it setting out to poison our children. It’s time for the unproductive and unhelpful rhetoric to stop.

–Scott Prestidge, director of communication and public affairs at the Colorado Oil and Gas Association

Fracking uses a great deal of water, in some cases up to 7 million gallons for a single well, which is one reason for its controversial nature. It also has the chance to release a high volume of chemicals into the ground, contaminating local water supplies. However, fracking is also extraordinarily useful.

In October of last year, Scott Prestidge, director of communication and public affairs at the Colorado Oil and Gas Association, wrote a letter to the editor. This letter was in response to a column criticizing the oil industry, and in it he asserted that the oil and gas industry is one of the most heavily regulated in the country and still manages to keep everything clean and efficient.

“Colorado’s tough oil and gas regulations, combined with cutting edge innovations, have produced tangible results. For example, between 2011 and 2017, Colorado’s VOC emissions dropped nearly 50 percent, at the same time oil production quadrupled,” Prestidge wrote. “All of this is taking place, while keeping our state’s energy costs among the lowest and most affordable in the nation, benefiting families and businesses of all types. Colorado’s industry is neither unregulated, nor is it setting out to poison our children. It’s time for the unproductive and unhelpful rhetoric to stop.”

There’s a great deal of truth to this. Fracking is an environmentally stressful practice, but Colorado’s ability to extract oil and gas cheaply from active wells is very good for the state economy and for consumers, as the plethora of natural gas reserves helps power the state at lower prices.

Colorado is among the top 5 producers nationally for natural gas production. Colorado also gains additional revenue as a state from the taxation of the oil and gas industry; 40 percent of oil shale revenue goes to the state’s general fund.

Fracking contributes to a great deal of staple Colorado industries, like the brewing and agricultural industries.

Roasting barley takes a lot of heat and powering the bottling machinery isn’t a cheap exercise. Natural gas is a major source of cheap energy for brewing companies, and without it, Colorado’s massive brewing industry wouldn’t be as strong as it is today.

Fracking also provides farmers with fertilizer made from natural gasses. Colorado has around 37,000 farms, the majority of which rely on fertilizer made out of nitrogen, potassium and phosphorous acquired in vast quantities and at low prices by Colorado’s oil and gas industry.

In 2010, Colorado oil and gas alone contributed to 1 percent of the total state personal income and 2.3 percent of state GDP. This reflects higher average wages in the energy industry than others in the state.

Colorado oil and gas gets a lot of heat for perceived risks to the environment, which are well-founded; if fracking goes wrong, the results can be disastrous.

However, the reality is that the energy industry is one of the most heavily regulated industries in the nation. As part of that industry, fracking is subject to safety regulations, and tests and safeguards are in place for soil quality, water quality and emissions.

Colorado has a very strong oil and natural gas industry providing jobs and cheaper energy to the entire state. It’s time to recognize that.

Columnist Ryan Tougaw can be reached at letters@collegian.com or online at @rjtougaw