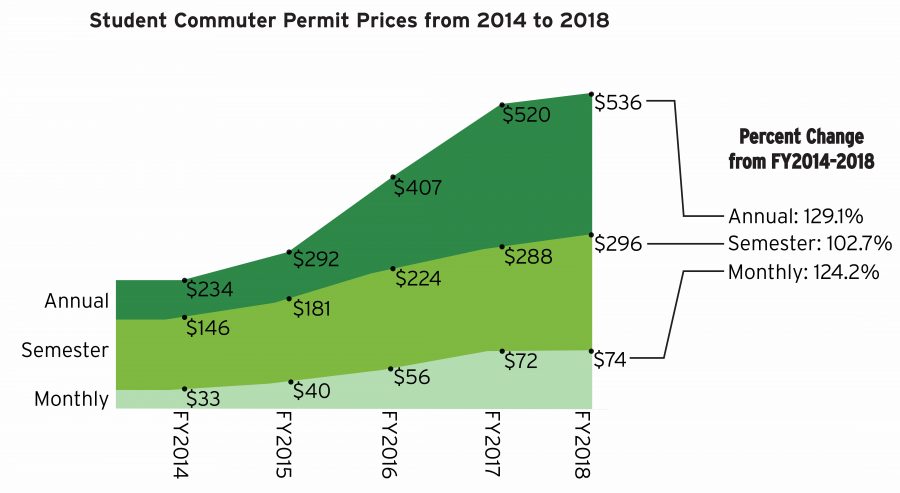 Editor’s Note: All opinion section content reflects the views of the individual author only and does not represent a stance taken by the Collegian or editorial board.

Almost every student has first-hand frustration with the parking situation on CSU’s campus. Complaints surrounding the pricing of permits and citations as well as the lack of convenient spaces are well-known and well-documented.

Parking on campus is an issue plaguing universities across the country, as various students have written.

The University has taken some steps to modify the parking model in response to complaints, including reducing certain rates and opening parking garages, but backlash persists.

While it may be tempting to expand on this criticism, a more constructive approach would be to look at how best to address the issue- an approach that is easier than it sounds.

On the administrative side, CSU must be transparent, not just with pricing and availability of parking, but also with the governance of the parking model and how the decisions that shape it are made in the first place.

Under Colorado law, the University parking program must be self-funded, meaning that no tuition or fee revenue can go towards parking. As a result, “staff, faculty, students and visitors pay for parking in one of three ways: buying a permit, paying a meter or paying a fine.”

In terms of pricing, CSU strives to ensure that parking permits are “competitively priced with [its] peer institutions.”

CSU publicly lists the prices of its permits online, unlike rival institution the University of Colorado-Boulder. Short-term parking rates are also publicly available.

This model is managed and overseen by the Parking Services Committee, which is made up of twelve people, six of whom must be students.

However, while the University is transparent with pricing and operations of the parking model, information on this committee and its decision-making process is not easily available to the public or community members who are unable to attend meetings.

Most students are probably completely unaware such a committee exists at all. As a result, students cannot contact their representatives on the committee or apply to be on the committee, and those who wish to be well-informed on the rationale behind difficult decisions find themselves in the dark.

If students were able to obtain this information, the impact would be highly beneficial. The increased transparency, in theory, would insure against a selection bias in membership on the committee in terms of philosophy and experiences.

Additionally, in the event of a controversial decision being made by the committee, students would be well-informed and feel a greater sense of personal ownership of it.

Increased transparency may not result in substantially different policies being enacted, but it would provide the student body with a healthy avenue to express concerns and angst.

On the administrative side, CSU must be transparent, not just with pricing and availability of parking, but also with the governance of the parking model and how the decisions that shape it are made in the first place.

The fixes mentioned above will have an extremely limited impact if students are not engaged with the process.

On the student side, students of diverse perspectives must show up and play an active role in the governance of the parking model, regardless of whether they are officially part of the Parking Services Committee.

As the ASCSU election demonstrated, parking is an issue that galvanizes students. During the election, which saw a record number of students vote, both the Syron-Sullivan and the Brust-Winchell campaigns made “ethical parking” a plank of their platforms, framing parking shortages and pricing as a moral issue for students.

Of course, in terms of the University’s carbon footprint, questioning the relevance and merit of focusing on parking is perfectly valid.

To its credit, the University has mainly been able to balance parking availability with promoting sustainability and alternative transportation on campus as a form of demand management.

Due to these efforts, the majority of students now use an alternative form of transportation to get to campus, though driving is still the number one choice.

On the student side, students of diverse perspectives must show up and play an active role in the governance of the parking model, regardless of whether they are officially part of the Parking Services Committee.

However, while many students are highly supportive of an aggressive and deliberate push toward public transit, many are also concerned that this push may have gone too far.

While the logic for discouraging parking might be sound, the University still needs to address the concerns of students who feel squeezed, as they cannot afford parking passes and are unable to take public transit due to their commute.

It is also the responsibility of these students to have a presence in the meetings that shape decision-making in this area.

Students representing both sides of the argument must be well-informed and consistently engaged in order for them to have a chance to shape the debate for the future. If students are upset about parking on campus, they must vocalize it.

Columnist Josh Silva can be reached at letters@collegian.com or online at @jsflix.