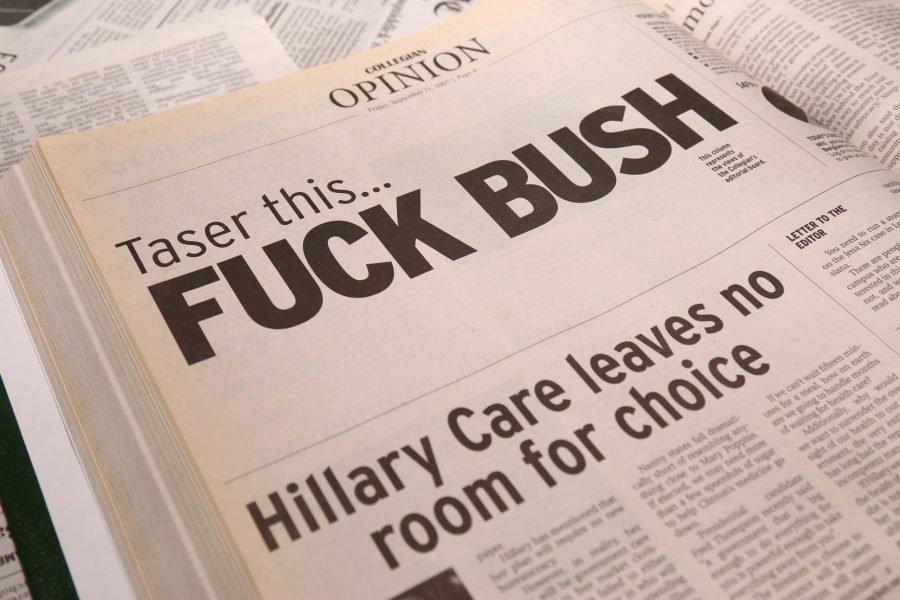 In 2007, Collegian editors published an editorial that said, "Taser this... FUCK BUSH." The editorial caused a campus uproar, recieved national news coverage and ultimately ended in the creation of Rocky Mountain Student Media as a nonprofit corporation. (Davis Bonner | Collegian)

Editor’s note: This is an editorial. Editorials do not reflect the view of all employees of the Collegian, but instead represent a stance taken by the Collegian’s editorial board, which consists of the editor-in-chief, the managing editor, the digital production manager, the news editors, the opinion editor, the sports editor and the arts and culture editors.

This editorial was endorsed by the CU Independent’s editorial board, the independent student newspaper at the University of Colorado Boulder, in partnership for #SaveStudentNewsrooms day.

In 2007, a group of Collegian editors published a controversial editorial that took up about a quarter of a page that said:

The University was pretty upset with them. So was the community. Advertisers pulled their support, students on campus (particularly the CSU College Republicans) demanded that the editor-in-chief, David J. McSwane, resign and talks began about how to deal with the tension inherent in allowing students to go unsupervised as representatives of CSU.

The University president at the time, Larry Penley, wasn’t all that supportive of student media in the first place, according to those who were students at the time. Though the paper had been operating editorially independent for years, it was financially and structurally dependent on the University.

The editorial — inspired by an incident at a John Kerry speech where a University of Florida student was tasered — threw The Collegian into the national spotlight for weeks, sparking debate on if student media should be controlled by the University and by how much. Whether you consider it an impulsive mistake or a stand for free speech, the editorial pushed the tension between CSU’s administration’s desire for control and The Collegian’s desire for independence to a breaking point when the editors decided to make a point.

But, after weeks of campus protests and full pages each day dedicated to letters to the editor, the end result was a preferable arrangement for The Collegian, for the University and for the students.

By the recommendation of a committee of stakeholders, the nonprofit organization Rocky Mountain Student Media Corporation was founded in 2008. To this day, that corporation independently operates The Collegian, College Avenue, CTV, KCSU, OnSpec, Student Video Productions, Creative Services and the Advertising and Marketing departments. Instead of relying on the University for roughly half a million dollars each year and being subject to the rules of a university department, RMSMC receives the same amount of money through student fees by a three-year contract with the Associated Students of Colorado State University. This contract with ASCSU provides about half of RMSMC’s budget each year, which in total amounts to about $1.2 million.

RMSMC provides employment, volunteer and internship opportunities to more than 300 students per year. The funding that is provided by ASCSU specifically targets student wages so that students do not have to choose between working a job off campus that pays a living wage or gaining valuable internship experience that they can reference while applying to jobs after graduation.

Tonight, the ASCSU president-elect will present his budget to the student senators. We are included in a line item. While it may seem counter-intuitive for the student government, a body that The Collegian covers aggressively and diligently each year, to fund a media corporation, we think this is a preferable arrangement than the one prior to 2008.

At other universities around the country, newsrooms are being quietly defunded or coming under editorial control of their university. Many of them are drawing attention to the issue by participating in a nationwide campaign today called #SaveStudentNewsrooms. But at CSU, we are humbled to know that if we lost institutional funding support, it would be the choice and will of the student body that ASCSU represents, not the choice of high-ranking university officials who want to save face.

We’re funded by students, we employ students, we’re managed by students and write stories about students. It’s a pretty neat deal. We acknowledge that we aren’t perfect. It’s a learning laboratory, like the student government is. And, when learning happens in real time, we make mistakes like students.

Our fates are intertwined, and our goals are aligned. Our deepest desire as a media organization is to serve our peers, and we believe that our student representatives aim to do the same. On #SaveStudentNewsrooms day, we hope ASCSU will uphold a long tradition of their goal to save the student voice. We believe the two are one in the same.

The Collegian’s editorial board can be reached at editor@collegian.com