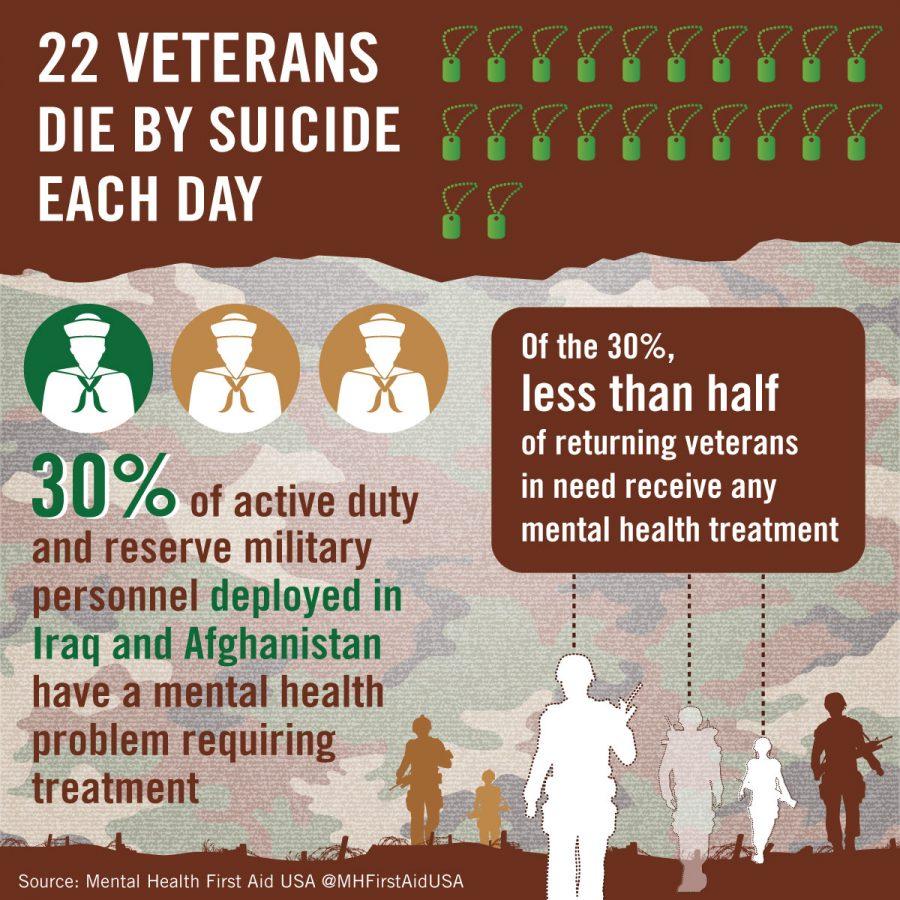 Editor’s Note: All opinion section content reflects the views of the individual author only and does not represent a stance taken by the Collegian or editorial board.

Depression and suicide are national epidemics, and even more so with America’s military veterans. Veterans experience mental health disorders, substance use disorders, post-traumatic stress, and traumatic brain injury at disproportionate rates compared to their civilian counterparts.

As CSU is home to more than 2,000 student veterans, we must all better understand the situation facing our community.

According to a study from the Department of Veteran Affairs, around 20 veterans take their own lives every day. That represents roughly 19 percent of all suicides, despite making up less than nine percent of the population.

Nationally, suicide is up across the board, according the CDC. From 1999 to 2014, suicide rates increased 24 percent, from 10.5 to 13.0 per 100,000 population, with the pace of increase greater after 2006. The Department of Veterans Affairs released a report in 2016 after studying 55 million military medical records from 1979 to 2014, and in it veterans were found to have suicide risks 22 percent higher than non US-veteran adults.

This begs the question of why the rates are so much higher for veterans. Having lost my best friend and fellow veteran to suicide in 2014, I can tell you that the problem is not so simple.

Studies don’t show an association between deployments and suicide rates, but rather they show increased rates of suicide that correlates with separating from military service.

A study by the Pew Research Center found that “Veterans who served in the post-9/11 period reported more difficulties returning to civilian life than those who served in Vietnam or the Korean War/World War II era, or in periods between major conflicts.”

It is difficult for civilians to grasp the difficulties veterans face in transitioning from active duty to civilian life. The problems in transition are varied. While the military prepares its members for combat, they do not do a very good job in providing training in life skills.

The military culture is strange and demanding, but members learn to love and embrace it. This culture includes, but is not limited to, the “values, customs, traditions, philosophical principles, ethos, standards of behavior, standards of discipline, teamwork, loyalty, selfless duty, rank, identity, hierarchy, ceremony and etiquette, cohesion, order and procedure, codes of conduct, implicit patterns of communication, and obedience to command.”

Becoming an active member of the armed forces requires a complete transformation of one’s self and adaptation to all of the aforementioned culture points. When separating, all of that disappears, and veterans must undergo that process once again; but this time while finding a new job, relocating, enrolling in school, living independently for the first time, or reuniting with one’s family after long absences overseas.

Healthcare services are completely provided by the military, but once separated, a veteran has to learn how to get a doctor, dentist, life insurance, and also know how to navigate the paperwork and process of obtaining benefits and services from the Department of Veteran Affairs.

Out of 21.6 million military veterans, only 8.5 million of them are enrolled for healthcare through their VA provider.

Veteran Affairs secretary Dr. David J. Shulkin reacted to the VA’s report, saying, “We know that of the 20 suicides a day that we reported last year, 14 are not under VA care. This is a national public health issue that requires a concerted, national approach.”

Many veterans with PTSD and other mental health symptoms are seeking help, even more so in recent years. Even so, there still exists a significant percentage of the veteran population not seeking treatment.

One reason could be the difficulty of working with the VA. “When patients have a delay initiating care they’re less likely to follow through,” reported a 2014 study by the VA.

Another could involve the stigma that seeking help is a sign of weakness, and could potentially limit one’s chances of getting a certain job.

The transition from military to civilian life can be objectively and empirically connected to depression and suicide with our veterans.

To my fellow veterans, there are options for you. If you feel like something is “off,” I must stress to you that treatment does work. You can and will get better.

Veterans are a welcome part of the CSU community, and Rams take care of Rams.

Collegian opinion reporter CJ Ash can be reached a letters@collegian.com or on Twitter @Cee_Jay_Ash