Willson: What we can learn from Gina McCarthy 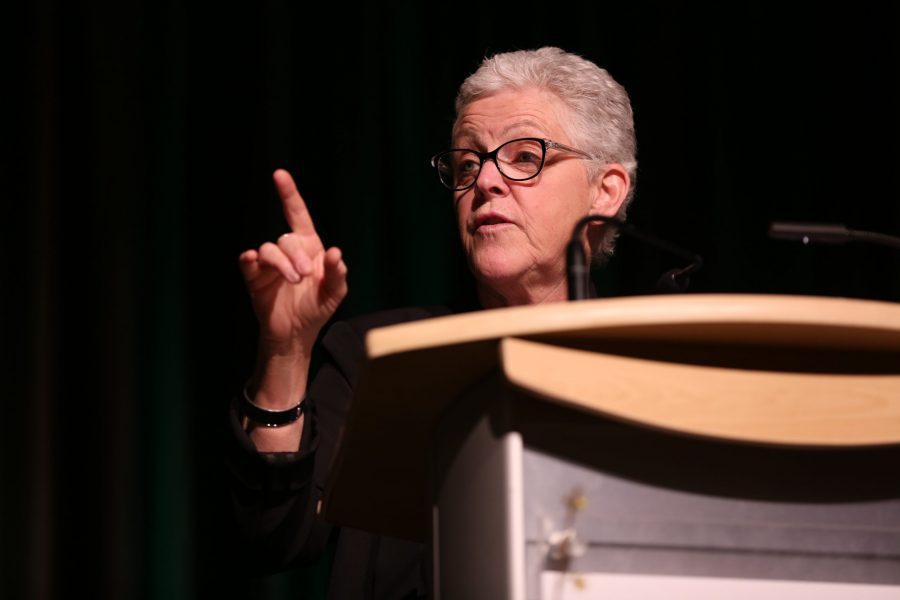 Gina McCarthy, the former director of the Environmental Protection Agency, delivers her speech about environmental policy, public health and the United States' environmental legacy at the Lory Student Center on Feb. 28, 2018 at Colorado State University. (Forrest Czarnecki | The Collegian)

Environmental issues have been firmly pushed to the wayside ever since Trump took office. Over the last 14 months, the push for progressive environmental reform has been beaten down, from major budget cut proposals for the Environmental Protection Agency (EPA) to removal of protective ecological regulations.

When I heard Gina McCarthy, former head of the EPA, was coming to speak at Colorado State University, I prepared myself for the worst–a reiteration of all the negative sentiments I’d heard echoed in the news for over a year.

I was pleasantly mistaken.

McCarthy offered immense promise of hope to those who care about the health of this planet in an inspirational speech.

McCarthy focused on the fact that, in times of uncertainty, one must stay level-headed and maintain realistic optimism. Doing so will prevent the misguided efforts of this presidential administration from derailing the admirable achievements of the EPA over the last 47 years.

McCarthy explained that although the Trump administration is attempting to rollback Obama-era policies like the Clean Power Plan, it will not succeed in its efforts due to procedural roadblocks and oppositional public sentiment.

She also addressed the newly revitalized “attack on science.” This term refers to manipulating or erasing data, removing support for vital research projects, and attempting to discredit scientific enterprise and science-based policy, according to the Union of Concerned Scientists.

In response to this troubling trend, McCarthy emphasized maintaining scientific advancements and focusing on clear-cut facts rather than convoluted falsehoods—or, “alternative facts,” if you will.

She encouraged everyone, from college students to senior citizens, to use their political voice to vote and enact change, starting at the grassroots level.

Additionally, McCarthy stressed that climate change is not a partisan issue, but a critical matter of public health. In the divided state of today’s politics, this fact is more pertinent than ever. But by choosing to look at public welfare before political ideology, progress can be made.

Of course, progress can seem out of reach. From pulling out of the international Paris Agreement to appointing Scott Pruitt—a denier of climate change—to head of the EPA, the president’s decisions have taken attention away from pressing ecological issues which affect not only the American population, but the entire world.

Distressing as this may be, it is a salient reminder that we cannot rely on government alone to solve the climate crisis. As McCarthy asserted last week, the American people must use the system of a democratic republic to their advantage. In many ways they already have.

When Trump pulled out of Paris, a number of states began drafting, enacting, and/or strengthening their own climate goals and environmental policies.

Non-partisan and nonprofit activist groups, like the Colorado chapter of Defend Our Future, are advocating for Pruitt’s removal and replacement by a more qualified individual.

CSU itself has made major strides in ecological preservation. This can be seen almost anywhere at the school, from classrooms teaching 962 different sustainability-related courses, to campus-wide single-stream recycling, to its goal of achieving 100% renewable energy by 2030.

Gina McCarthy’s speech served as a reminder that, by wielding political passion, the American people hold the majority of the power. The voice of the citizenry extends far beyond environmental issues; it may be used to tackle civil rights, health care guidelines, gun legislation, and countless other topics of debate.

Democracy is not dead. Trump’s term will not last forever. The environment may be at in its most threatened state, but the United States have never been more impelled to fight back. If someone as knowledgeable as Gina McCarthy is rooting for us, perhaps there is hope after all.