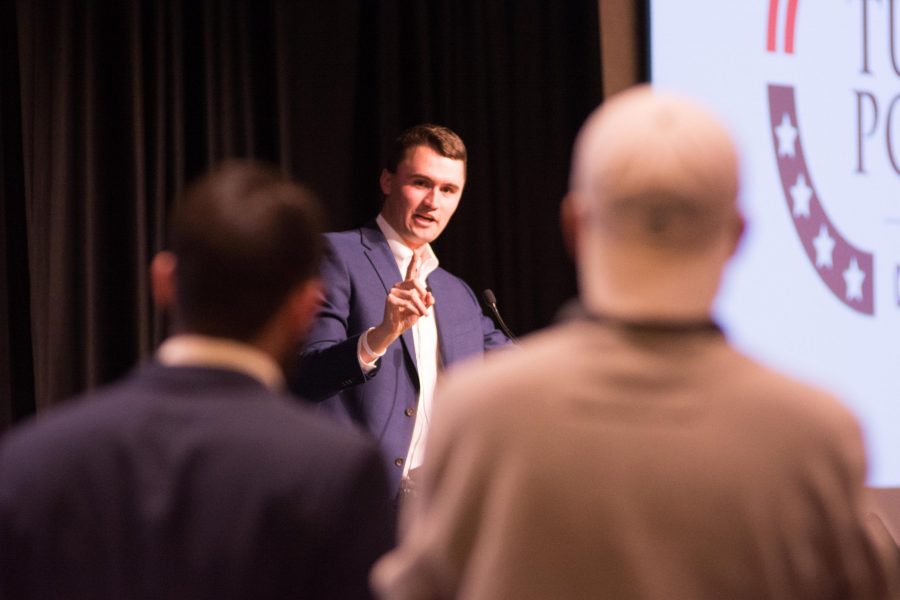 Editor’s note: This is an editorial. Editorials do not reflect the view of all employees of the Collegian, but instead represent a stance taken by the Collegian’s editorial board, which consists of the editor-in-chief, the managing editor, the digital production manager, the news editors, the opinion editor, the sports editor and the arts and culture editors.

After Charlie Kirk’s speech on Colorado State University’s campus Friday, protests became violent. A group of white nationalists marched across our campus and toward a crowd of protesters—including Antifa—in response to Turning Point USA’s event. We don’t know who the white nationalists are, but we assume they are from everywhere: far away cities, nearby cities and even our own.

The group of white nationalists and Antifa got into a few fights, and police ultimately broke up the crowd, declaring the gathering unlawful after it became violent.

Let’s be clear: The Collegian condemns the use of violence during this and any other event. The Collegian condemns Nazis, white nationalists or anyone else who spreads hateful and dangerous ideology. We’re grateful that CSU and many conservative and liberal student leaders did the same. But, we do not believe “condemning” extremists is enough. Implicit and subtle racist rhetoric also needs to be explicitly and directly rejected.

Implicit and subtle racist rhetoric also needs to be explicitly and directly rejected.

Derek Black, a former white nationalist and godson of well-known white supremacist David Duke, told the New York Times last summer that from the perspective of white nationalists, it’s the definition of the “movement” that they are working against the establishment—these radical groups expect all the “usual condemnations” to come.

We also know that white nationalist groups continue to associate themselves with Republicans. They hail President Donald Trump as a great leader, particularly after, according to Black, he salvaged their message from Charlottesville by saying there were fine people “on both sides.” On Friday, they arguably showed up in support of Kirk, the founder of the student-aimed conservative nonprofit Turning Point USA.

While we acknowledge that white nationalists are not affiliated with Turning Point USA, we also find it troubling that this group of people imagines that they are. Kirk’s beginning statement that he and Turning Point denounce the “radical groups outside” does little to actually change the conversation because in the same speech, he purports that white privilege is a myth, that sweatshops are a “necessary step developing countries need to go through,” and that if young people don’t like the U.S. or capitalism, they can and should leave.

None of this really has to do with the free market and capitalist ideals that Kirk and his supporters claim as their sole interest. After all, Republicans will be the first to tell you that capitalism need not inherently be oppressive (so acknowledging white privilege shouldn’t threaten it) and that poor working conditions can be solved with regulations or competition (so sweatshops are not necessary). The assertion that one can simply “leave” comes from a privileged perspective in which one would actually need the means, but beyond that, this “defense” of capitalism does nothing more than garner a few laughs at the expense of real dialogue.

Perhaps none of these racist undertones that undermine his advertised free market cause are surprising to hear from Kirk in particular, whose organization has internal allegations of racial bias and that proudly brings speakers sure to spark protests on to college campuses. As an example close to home, last year Turning Point cohosted an event that brought Milo Yiannopoulos to the CU Boulder campus. Yiannopoulos is known for making inflammatory racist, sexist and homophobic comments and inciting riots on college campuses. It seems that Kirk and Turning Point’s only purpose is to create controversy at universities with radical speakers and by making a point to embarrass liberal students with short, sound-bite ready retorts.

If free market capitalism was really the only thing Kirk was advocating for Friday night, we would happily praise CSU’s conservative students for leading the way in changing the rhetoric in the Republican Party, which too frequently and too quickly devolves into labeling undocumented immigrants as rapists and Muslims as terrorists. Sadly, it wasn’t.

To be fair, Turning Point USA has enticing words for students who feel they are spoken over, disregarded and labeled in the classroom. However, it is unfortunate that conservative students across the country continue to buy into Kirk’s insistence that the organization is simply and solely promoting the ideals of free market capitalism given the organization’s track record for controversy.

If conservative students want to be heard on college campuses, if they want to stop being labeled as racists because they liked some of what Milton Friedman had to say, then they need to do more than just condemn Nazis. They need to condemn all racist comments by all conservative leaders. They must fight back against divisive rhetoric, call out racist comments when they hear them, and stop inviting speakers to campus who are simply there to stir up controversy and further their own image. We’re disappointed that Kirk clearly had no intention to do anything other than the latter.

The Collegian’s editorial board can be reached at editor@collegian.com or on Twitter @CSUCollegian.