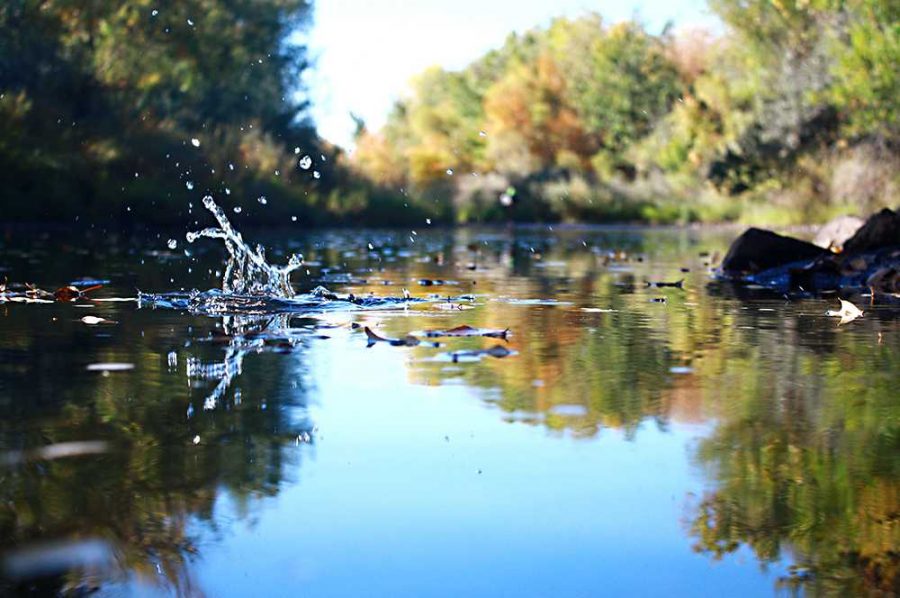 PHOTO ILLUSTRATION. The Poudre River has been running black with ash ever since the infamous fires of this past summer. The ash is preventing Fort Collins from using the Poudre as a source of drinking water.

Dysentery, giardia, E. coli, and salmonella are waterborne diarrheal diseases that can be caused by bacteria or parasites. They are all quite rare in the United States today, but a new so-called “health” trend has people paying for exposure to this illness and many others.

The raw water trend first came into the national spotlight in a write-up from the New York Times. Raw water is untreated–straight from the spring. There is no filtration and no added fluoride. Drinking raw water is dangerous, potentially deadly and indicative of an even larger problem: health privilege.

Live Water, the company that started this trend, advertises that they believe water is perfect just the way it is. It comes from the basic misconception that if chemicals are added, that must mean it’s bad. They charge somewhere between $12 and $16 per jug.

Paying this much for exposure to unfiltered water and the associated diseases is the height of privileged ignorance. Millions of people die annually because they lack access to water filtration, and it is disrespectful to all those people globally to pay for the same disease exposure, just because of an unscientific aversion to fluoride.

It is very important to understand that most of the water filtration process isn’t putting fluoride in – it’s taking things out. Water straight from the source without any filtration can come with a lot of unhealthy things in it – parasites, bacteria, pesticides – that filtration removes.

Our filtration system isn’t perfect. The situation in Flint proves that. But we are still much better off with filtration than without.

Now consider typhoid, a scourge of Cincinnati in the early 1900s, which was rampant with illness and

death until a water filtration system was installed, at which point the disease dropped precipitously.

Water filtration is largely considered to be one of the best public health advances in the world. The raw water trend threatens to undo this advance, and have people paying for the privilege.

Buying into the raw water trend is a slap in the face to the people who die every day because they lack access to treated water.

The World Health Organization has determined that hundreds of millions of people die or are permanently disfigured each year from waterborne diseases, diseases that our water filtration system keeps out. Almost 850,000 people, mostly children, die specifically from diarrheal diseases like E. coli or giardia. These diseases are preventable, and water filtration is the best way to prevent them.

Within the last decade, the WHO has called water-borne diseases the leading killer worldwide. They are a serious global public health problem, and now some people in the United States have decided to show off their privilege by paying for unfiltered water, when other people around the world are dying because they don’t have access to anything besides unfiltered water.

Much like the anti-vaccination movement, the raw water movement preys on the fact that our collective memory no longer recalls how terrible these diseases are. These haven’t been a major problem in the United States for a long time, but if enough people jump on the raw water bandwagon the diseases could make a comeback. We’ve seen it happen with measles as a result of the anti-vaccination movement.

A major reason the raw water movement has taken off is because of the fear of fluoride in the water. The creator of Live Water has called fluoride a “mind control drug.’” This is just patently false. Many scientific studies have demonstrated the safety of fluoride and the amount of fluoride in the water is controlled and recommended by scientists who research the long-term effects of fluoride for a living. Fluoride is extremely good for dental health and has been endorsed by every major public health organization, and considered by the CDC to be one of the top 10 public health innovations of the 20th century.

This reason for the raw water movement is absurd, not rooted in any fact, and as a result is putting people in danger for no good reason.

UNICEF estimates that 5,000 children die of diarrheal diseases every day. Yet some Americans with too much money to spend are choosing to pay to expose themselves to untreated water. This is privilege at its absolute height.

Anybody considering this needs to take into account the facts and the science. Just because we live in Colorado where the streams look nice doesn’t mean we can’t get waterborne diseases. If this trend takes off, it could set public health back decades.