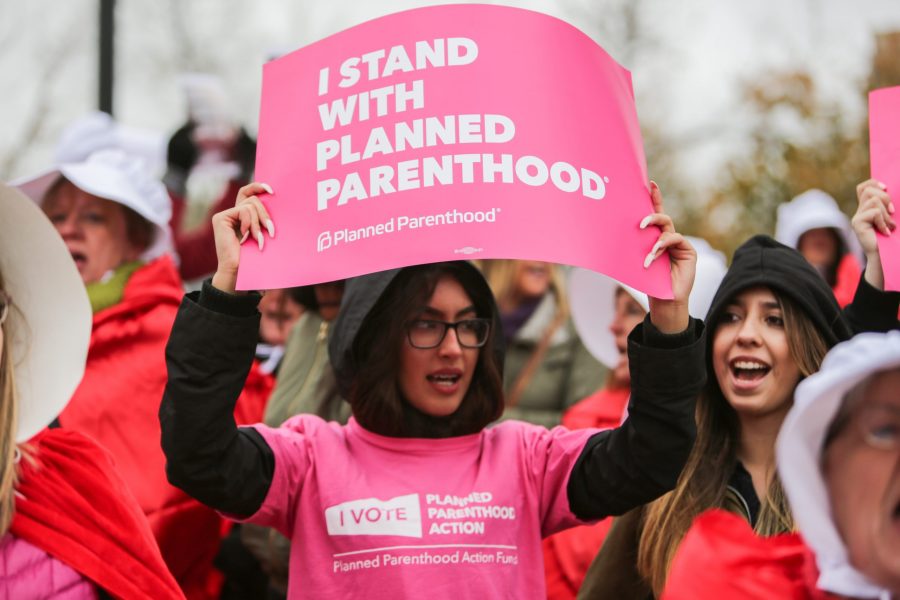 Lili Ana joins the protesters outside the Denver Marriott Tech Center where Vice President Mike Pence is to give a speech at a Republican Party fundraiser. Lili and other spoke out against the VP's anti-abortion stance and attempts to defund Planned Parenthood. (Davis Bonner | Collegian)

It’s been a big week for Planned Parenthood, and Colorado is in the spotlight.

First, president of Planned Parenthood Federation of America (PPFA) Cecile Richards announced she is stepping down after 12 years in the role. Richards has been a well-loved feminist icon, and her departure produced ripples of uncertainty for followers of the organization.

However, there was good news for Planned Parenthood last week. The Colorado Supreme Court had the final word on a lawsuit and declared it was legal for the state to provide funding to the women’s health giant.

Norton argued that funding Planned Parenthood at all was essentially freeing up money from other sources to pay for abortions and therefore in violation of the constitution.

This argument is frequently used to discourage funding for Planned Parenthood and other women’s health organizations, and each time it’s been in court it’s been found unsound. This does not stop anti-choice activists from using it.

Norton lost in Denver District Court in 2014. Then she lost in the Colorado Court of Appeals. Finally, last week she lost at the Colorado Supreme Court.

One would think these three losses will be enough to show that the law is not on her side, although given the presentation of the issue in conservative media outlets that does not seem to be the case. One headline from LifeSite News, an organization dedicated to covering the abortion issue from a pro-life stance, reads, “Colorado Supreme Court Violates State Constitution to Makes Taxpayer Fund Planned Parenthood(sic)”.

A culture of denial like this is dangerous, because it enables people to simply believe whatever fits best in their worldview regardless of the facts.

The facts at hand are that Planned Parenthood is an amazing advocate for women’s health and provides services like cancer screenings, STI testing and treatment, PAP smears, and birth control.  The latter, by the way, is actually the best way to reduce abortions. Outlawing abortion, studies show, does not actually reduce abortion rates. Regardless of one’s opinions on abortion, this seems like a universally good thing.

The argument against abortion is fundamentally a religious one. It is a religious view that life begins at conception. Most current law focuses on viability; when the fetus will be viable outside the mother’s womb. But in reality there are many perspectives on when life begins, and most of them are based in religion.

I am sympathetic to that religious view. I was raised in a Catholic family; I understand where that viewpoint comes from. But here in the US, we have separation of church and state, meaning it’s not legal to make law based on religious belief, because legally enforcing anyone’s belief can lead us down a dangerous path to theocracy.

The abortion argument is the battlefield for this fight, a fight against science and facts, a fight against separation of church and state. With the Colorado Supreme Court’s decision, fact and reason have scored a victory and this vital women’s health clinic will still receive funding in our state.

It is heartening in times when it feels like women’s health is constantly under attack to score a victory, and it emphasizes the critical importance of local politics. Decisions like the Colorado Supreme Court’s will set precedent that will help women’s health clinics around the country.

If the federal government won’t protect women’s rights, then it’s heartening to see states step up to the plate.