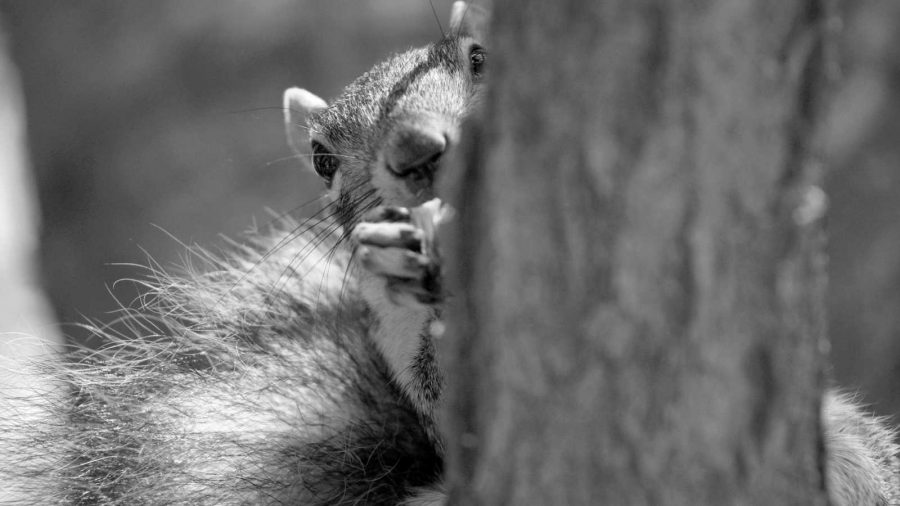 A squirrel plays hide n' seek while eating in the Plant Environment Experiment Center on campus. As many know, the squirrels on campus can be surprisingly social.

Editor’s note: This is a satire piece from the opinion section of the Collegian. Real names may be used in fictitious/semi-fictitious ways. Those who do not like reading editor’s notes are subject to being offended.

FORT COLLINS—The squirrels seen all over the Colorado State University campus will now be classified as a separate and unique species, according to a report issued last week. The report, which consists of numerous studies involving the furry rodents, was compiled by the university’s leading experts in the College of Zoology.

“Due to their habitat [campus], these squirrels have exhibited remarkable changes in dietary habits, activity patterns, and even anatomy,” reported Greg Oliver, one of the head researchers.

Following publication of the groundbreaking zoology reports, the squirrels were reclassified as a new species, which scientists have tentatively dubbed Sciurus aggiensis. (Formerly, the critters of the CSU campus were taxonomically classified as fox squirrels, which are scientifically referred to as Sciurus niger.)

There were three main reasons for the reclassification, according to researchers.

First, campus squirrels have a much different diet than fox squirrels of other habitats. S. aggiensis subsists exclusively on a diet of dining hall fare. According to CSU rodent experts, the squirrels are particularly fond of the cupcakes from Academic Village and the focaccia bread from Allison’s Spoons.

Secondly, campus squirrels have unique activity patterns. While most squirrels are highly active, S. aggiensis was found to be remarkably sedentary. Unless chasing down an abandoned take-out container (the animal’s favorite prey), the squirrels preferred to sit on the grass or stretch out for a nap somewhere in the sun-soaked Plaza.

Thirdly and finally, S. aggiensis has a different anatomy from its zoological counterparts. Whereas most fox squirrels weigh around 3 pounds, the average CSU rodent weighed a whopping 6.5. Researchers surmise this is due to sedentary living coupled with a high-calorie dining hall diet.

Although the campus squirrels have a large body size, their little bones cannot support their ever-growing mass. Skeletal fractures have already been observed in squirrels with body weights exceeding 8 pounds.

Several morbidly obese squirrels are currently undergoing weight-loss experiments involving diet modification, squirrel strength training, and regular wheel-running (cardio). Scientists hope this will improve health problems and even hypothesize it will cause S. aggiensis to revert back to its former state as a fox squirrel.

The results of the experiments are expected to be published in the 2018 edition of Scientific Journal of Sciurine Bariatrics.