Willson: Exercise is not always healthy 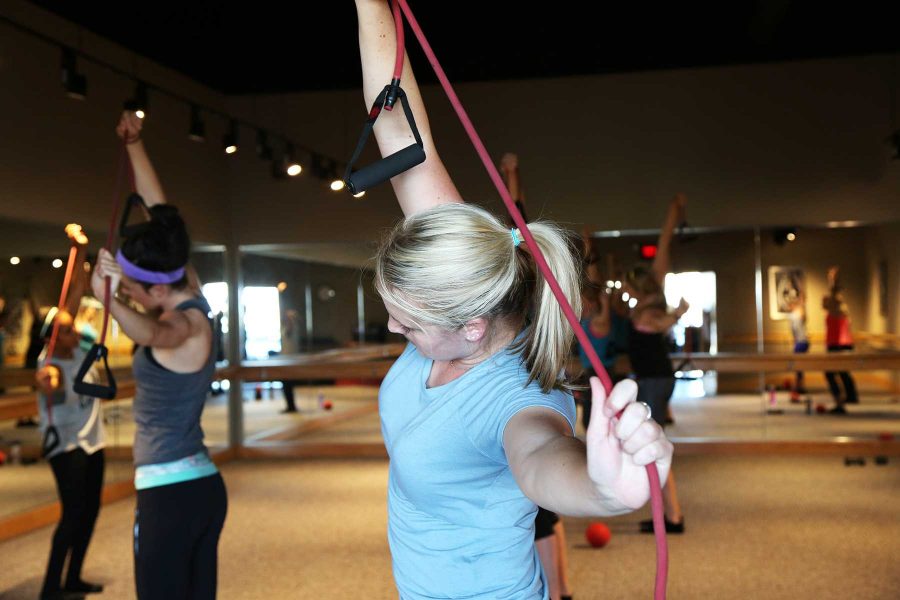 In the midst of a rigorous workout during one of Pure Barre's afternoon class sessions, Kat Parker stretches with a resistance band along with the other participants at Pure Barre on Council Tree Avenue. (Photo credit: Amanda Garcia)

In the United States, an estimated one-third of adults are obese. Exercise is touted as one of the best things you can do for your health. Given how positively it’s portrayed, it might seem hard to believe that there could be a such thing as too much exercise. It’s cited as a cure-all for whatever ails you, whether it’s disease, depression, or body weight . But anything in excess can be harmful, and exercise is no exception.

Exercise addiction, understood as “an unhealthy obsession with physical fitness and exercise,” affects an estimated three to five percent of the American population. This condition has severely negative impacts on emotional, physical, and social well-being.

Tolerance: Needing more exercise over time to feel the same effects (e.g. increased mood, better view of self, etc.)
Withdrawal: Negative emotions and physical feelings (e.g. anxiety, sleeplessness) that result when exercise is not completed or cut short.
Intention Effect: Exercising longer than you had originally planned, on numerous occasions. For instance, your 20-minute cardio session turns into an hour-long marathon.
Lack of Control: Feeling like your activity habits are very hard to maintain  or “normalize”; includes compulsive thoughts of and feelings about exercise that may disrupt social and work situations.
Time: An exorbitant amount of time is devoted to exercise, including engagement in, planning for, and recovery from the behavior.
Reductions in Other Activities: Personal interests and responsibilities, such as work, social life, and recreation, are ignored so exercise receives primary focus. Relationships and emotional health may suffer.
Continuance: Continuing to engage in exercise even if injured, ill, psychologically hindered, or advised by medical professionals to decrease physical activity.

In all the ways seen above, exercise addiction is analogous to a drug problem. Just as substance abuse can destroy lives, so too can this dependency on physical activity.

For as long as I’ve struggled with anorexia nervosa, I have also dealt with exercise addiction. Over the years it has taken different forms, each destructive in their own ways.

When I was 15, I became addicted to running. For an entire summer, every morning at 7 a.m., I would drag my emaciated body out of bed and run 3-4 miles. Even after I developed swelling in my ankles from overexertion and poor circulation, I continued to run. The psychological high that ensued from running on empty—quite literally—kept me addicted to the behavior, even as physical injury ensued.

When I was 17 and in a recovered state, I developed (what was initially) a healthy passion for weightlifting. I took a strength and conditioning class at my high school, which consisted of two to three 80-minute classes per week. At first, all I cared about what getting stronger. But soon my eating disorder crept back in, and before I knew it, I was lifting for the sake of aesthetic and weight loss.

I put less effort into my schoolwork and friendships due to fatigue, and subsequently my grades dropped and relationships faltered. Meanwhile, my level of exertion in the gym only increased. I was chasing the highs, over and over. One day, a classmate told me, “I’ve never seen someone exercise so much in my life!” I failed to detect the concern in his voice, instead interpreting his words as a compliment. I was so deluded I might as well have been on drugs.

Exercise addiction damaged my family relationships as well. When my sister needed help moving into her apartment in Arizona, I refused to accompany her and my mother. The trip would have only been two days long, but the thought of being away from the gym for that long was unbearable. Instead of helping my sister, whom I love dearly, I stayed home alone, with nothing to keep me company except workout videos and trips to the gym.

My dependency on exercise is something I still struggle with. But today it is more of a hard habit than an addiction. I am in the student recreation center 7 days per week, but now only 5 to 6 of those days are spent weightlifting. The others I just do some form of cardio. This, for me, is progress.

But those cardio days are nevertheless mentally challenging. Sometimes I feel lazy, pathetic, and weak, or I get irritable and short with those around me. I certainly have a lot of work to do before I am “sober.”

But if struggles with exercise addiction have taught me anything, it is how important it is to speak up about this affliction. Exercise can be a wonderful thing, but when taken to extremes, it erodes the fibers of the body, the mind, and the soul.

Fortunately, there are ways to combat exercise addiction, such as cognitive behavioral therapy, counseling, and expanding one’s hobbies. If you or someone you know is struggling with exercise addiction, seek help. The CSU Health Network or Addiction.com are both great resources with which to start.