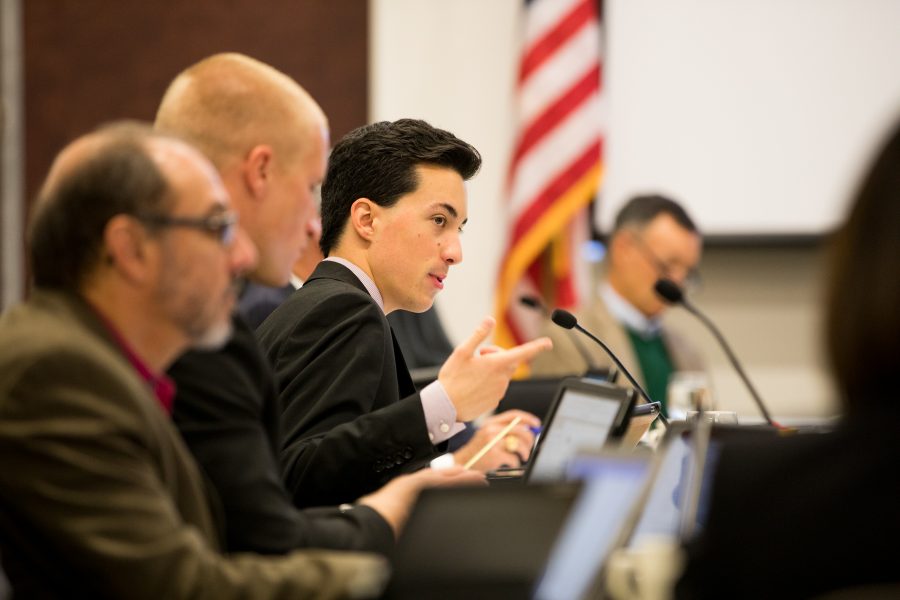 Josh Silva, Student Representative at CSU-Fort Collins, speaking at the Board of Governors meeting on Oct. 05 2017. (Jordan Reyes | Collegian)

The Associated Students of Colorado State University are the proclaimed voice of the students. Recently, it does not seem like they are upholding this standard. Our student governments idea of exercising democracy looks more like a screaming match between individuals than an encompassing ‘voice of the people.’

ASCSU has endured scrutiny since I have been at CSU. The issues within ASCSU as a whole are emerging as a result of an outside factor is not present in larger scale governing bodies: lack of accountability. Something must be done internally to

The mere existence of ASCSU is to provide a democratic learning institution that students can interact with to help prepare us for the outside world. ASCSU gets to act like a governing body, the student body partakes in elections, and student media reports on it. It is a beautiful thing—our university is a microcosm of society.

However, ASCSU members are only students, and majority of positions are unpaid, except executive positions– so it is very different from a legitimate governing body. There is very little accountability, and student have have the freedom to make rash decisions and learn from them.

Each member of ASCSU is learning just like the rest of us. They are going to make mistakes because they are the fresh new political minds of our generation just starting out. However, the lack of accountability has reached a harmful point.

This semester, ASCSU has spent the majority of their time straining over the impeachment of President Josh Silva. The impeachment has masked accolades made by ASCSU, such as launching a study for U+2, revamping RamRide, showcasing the CSU health network, and enhancing the game day experience as a whole.

ASCSU filed for impeachment the first senate session of the year, and since then that petition was retracted and three separate petitions have surfaced.

The petitions have been riddled with emotional arguments based on identity and feelings.  The initial call for impeachment was filed by Sen. Cerridwyn Nordstrom on behalf of multiple senators due to a technical error, which Silva publicly regretted.

Following the first petition, two more were filed again by senator Nordstrom, and the mess began. Senators claimed they were threatened into signing the impeachment petition, Silva was slammed with allegations, and the confusing narrative ensued. This whole debacle could have been avoided if our student government has chosen to resolve this dispute in another manor that does not involve the tedious impeachment process.

But, that is not what each member who signed the impeachment petition had in mind. The majority of members are first time members of governing bodies. Why not play politics when the stakes are so low?

The ASCSU larger body gets to hide behind a number of unrecognizable faces. Senators are not paid, and the process to become a senator is fairly easy. Silva had to campaign for presidency, assume a public figure role, and maintain a reputation in the public eye. If he is impeached, it will be a permanent mark on his ledger. He is just here to learn like the rest of us, but his stakes are higher.

The minimal to no paycheck non-executive members receive and lack of public figure status allows them to do whatever they want. The beauty of impeaching a student body president is that it probably will never follow their later on—Although, it will certainly follow Silva.

“When you bring emotion into it, it’s a very dangerous game of fire.” Said Silva. “They could potentially ruin my career. To them its not a ‘we can talk about it and mitigate it’ because they don’t want that.”

“When you bring emotion into it, it’s a very dangerous game of fire.” Said Silva. “They could potentially ruin my career. To them its not a ‘we can talk about it and mitigate it’ because they don’t want that.”

Nordstrom said she filed the third petition as a third party and was not bringing forward the petitions for any political motives, according to the Collegian. There are other means of addressing these issues, but impeachment seems to be the go to for these senators to the point they will continue to file for impeachment until it works.

“It’s not about the politics, it’s about the process,” Said Nordstrom. “It’s about transparency and being able to be transparent. This isn’t any ill-will against Josh at all. This is just about being accountable.”

“It’s not about the politics, it’s about the process. It’s about transparency and being able to be transparent. This isn’t any ill-will against Josh at all. This is just about being accountable.” -Sen. Cerridwyn Nordstrom

Despite Nordstrom’s denial of getting political, the allegations outlined in the third petition still do not add up. Members claimed Silva was drunk without evidence, and accused Silva of harassing another member of ASCSU by ‘calling her at 2am 17 times.’ The allegations prompted the Office of Equal Opportunity to investigate the harassment charges while the evidence, or lack of, is up for interpretation.

Chairman of the Conservative Interest Group and a former senator for the Associated Students of Colorado State University, Juan Caro came forward and said senators were intimidated into signing the impeachment petitions brought forth by Sen. Nordstrom. Former President Daniela Pineda-Soraca expressed  distain with ASCSU playing politics on the CTV talkshow Clash of Rams. It is not Silva who is lacking transparency. Silva has actually been rather transparent since the process began.

Josh Silva has the most to lose, and if he does, he will lose hard. Claims were based on feelings, emotion, and identity. If you all someone out for “harassment” with no evidence or reasoning, and the student body is left to create their own opinion with no facts.

I believe Josh Silva should maintain his position as President of ASCSU. I believe this because it would relieve a ton of stress and allow ASCSU to do its job. I cannot form an opinion on Josh Silva’s guilt regarding these accusations– there is not enough evidence for me to do that.

ASCSU is a learning institution, it is a microcosm of democracy– it is a beautiful thing. The next steps are simple. If transparency and scrutiny is due from president Silva, then senators involved should be held to the same standard. Silva may have to carry a false impeachment with him that will impact his career moving forward.

We owe students the truth, ASCSU needs to hold individual senators to a higher standard so the rest of the governing body can do its job.

Opinion editor Allec Brust can be reached at letters@collegian.com or online @allecbrust.