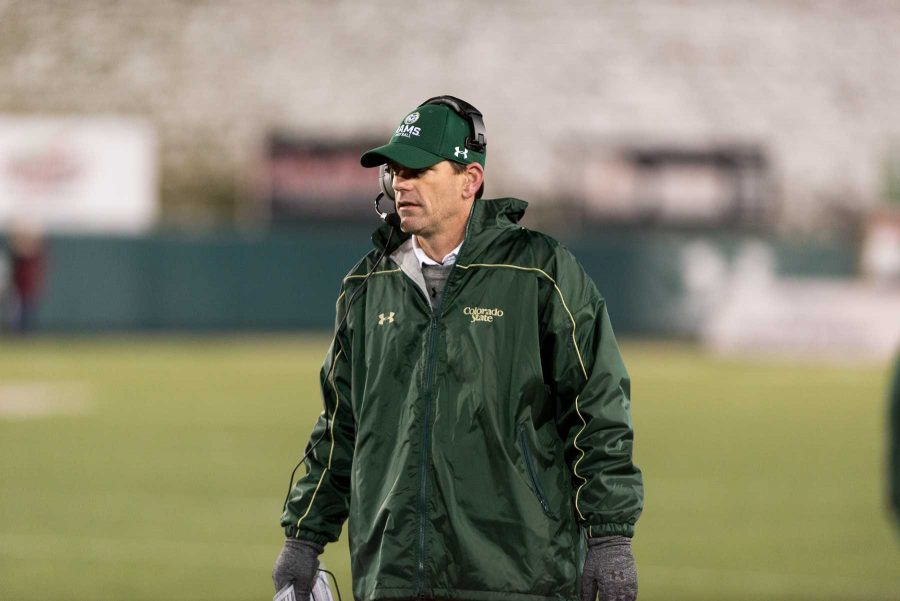 Colorado State University coach Mike Bobo on the sideline during the game against New Mexico at Hughes Stadium on Nov 19. This is the final game at Hughes Stadium before the opening of a new on campus stadium in 2017. (Luke Walker | Collegian)

The newly developed drug goes by the name “coach-eroids,” and elevates the user’s coaching ability to unnatural levels. The drug triggers hormones in the body that dramatically improves half-time speeches, play-calling, strategy, and overall charisma.

“Bobo is the best coach I’ve ever had,” said a player, who has chosen to remain anonymous, “But I never would have thought it was because he was taking drugs. It’s disappointing.”

Competitor schools are speaking out about CSU and the injustice Bobo caused to their games. Abilene Christian head coach Adam Dorrel is outraged by the advantage the CSU team had.

“We’d have won the game if Bobo’s play calling wasn’t so damn genius.” Dorrel said. “Now I know how he did it.”

It is not certain how long Bobo has been using the drugs, but quarterback Nick Stevens said he noticed a change in Bobo near the start of the season.

“I can’t explain it, he just became like one of those coaches you would see in the movies.” Stevens said. “Have you ever seen ‘Remember the Titans? That’s bobo, man.’”

For now, the university, as well as the NCAA are continuing their investigation and will soon decide if Bobo should be permanently terminated from coaching. CSU president Tony Frank conveyed his disapproval of these actions in a statement Tuesday.

“Winning football games is the single most important thing to this school, but not if it means sacrificing our integrity… makes me sick,” Frank said.