Beaulieu: Football players earn their job, it’s not a privilege 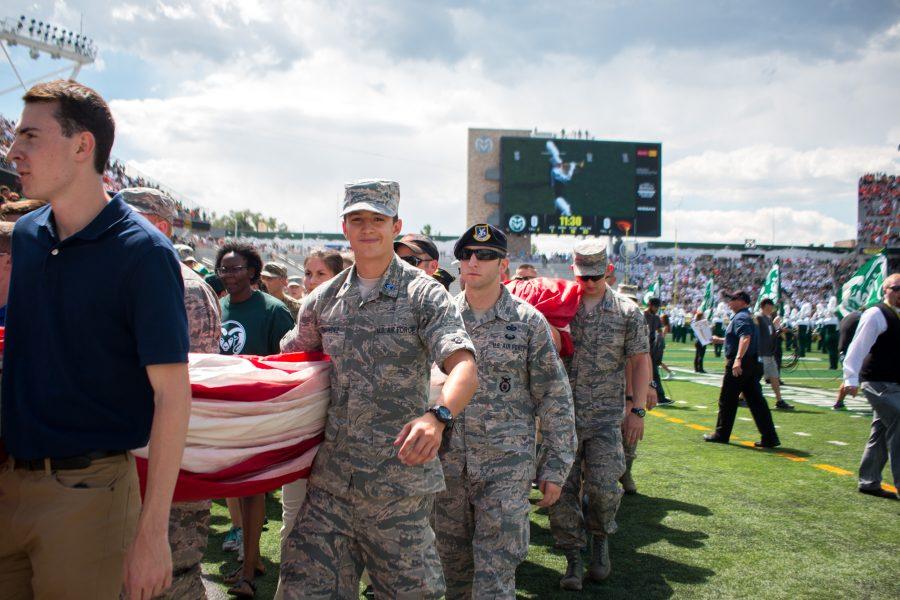 Military personnel carry the American flag off the field after the singing of the National Anthem at the new on-campus stadium. . (Jack Starkebaum | Collegian)

Editor’s note: The views and opinions in this article are solely of the author and does not reflect an official view of the Collegian or it’s editorial board

Donald Trump has had a lot to say about the NFL over the last couple of weeks. Almost every day since he called Americans who were exercising their right to protest “sons-a-bitches,” he’s had something to say about the NFL or its players. The most ridiculous aspect of this entire situation is the notion that these players are ‘privileged’ to play in the NFL. Professional athletes earned the right to work in their profession and, while that comes with privilege, privilege is not why they are there.

Trump said we should fire anyone who doesn’t stand for the national anthem, after he said that 12 percent of the NFL took a knee and 23 percent of them did not stand for the national anthem, according to Darren Rovel of ESPN. It would be a lot of trouble to replace all those players without losing quality in the NFL. The same can be said for workers at the top of any profession.

Most NFL players don’t grow up privileged, especially the players towards whom Trump’s comments are directed. A census study reveals that about 50 percent of NFL players come from areas of high poverty rates. Last year, 51% of the Denver Broncos self-reported themselves as being from the lower side of the income scale.

Privilege isn’t something you’ve worked your whole life to get. It’s something you get because of the position you are already in. When you earn a job, you receive the privileges that come with it; the job itself is not a privilege.

When googled, the first dictionary-cited definition of “privilege” is as follows: “ a special right, advantage, or immunity granted or available only to a particular person or group of people.”

Businesses cannot thrive without qualified employees. That’s what NFL players are, the few people qualified to be in the NFL. Privilege implies something is given, but there is always an exchange between employee and employer. Of course NFL players have advantages after they get to the NFL, but if playing in the NFL is just a privilege then we’re playing fast and loose with what we think is granted in this world. No matter what profession you’re in, you almost always have to do the work to get to the top.

While some people do have advantages given to them in getting a job, that’s the case more often with other demographics than it is with young black men, a group Trump mistakenly calls, via Twitter, “privileged.”

Using the word “privilege” in reference to NFL players is a way of, as Stephen Curry said, minimizing their opinions because they have money. As if their paycheck prevents them from seeing racial matters clearly. The people who believe this rhetoric are the same people who think Donald Trump can relate to them.

Privilege is earned by NFL players through the money that comes with being in their position, but calling them privileged merely for having a job is an insult to them and anyone else who earns their position, regardless of the sector. For the most part, no one gives out places at the top of any profession.

As Americans, we’re suppose to earn our keep. We need to give credit where credit is due.