Parafiniuk-Talesnick: Some want to be radical, some have to be 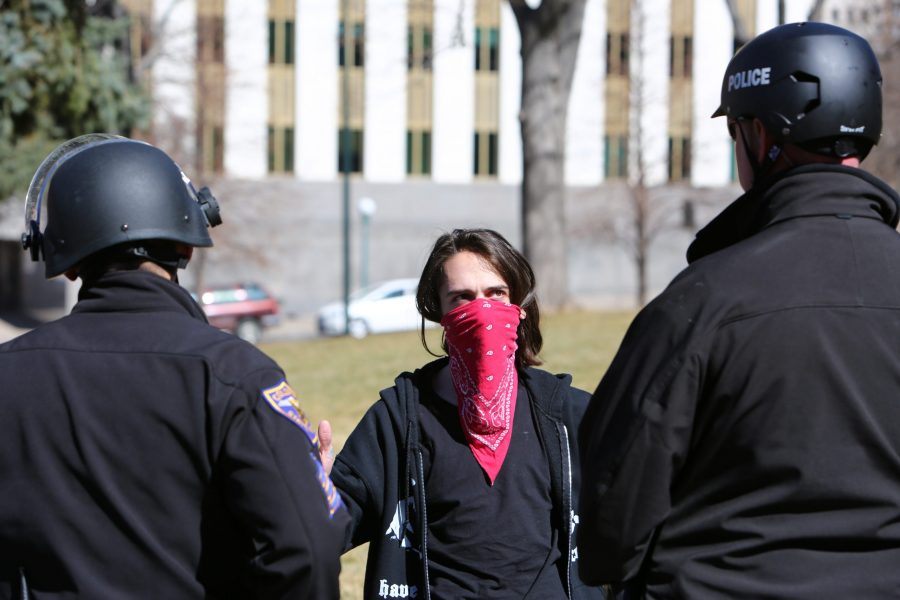 A protester against the Trump rally held at the capital building faces off against Colorado State Patrol officers. (Davis Bonner | Collegian)

I was recently in a feminist theory class when I found myself looking around the room and thinking, “yeah, there are a lot of lesbians in here.”

During my first encounters with feminism, I found myself very defensive of the ideology. So when the internet, family or other 13-year-olds spat out insults to keep me from the inevitable radicalism (and possibly, manhating witchcraft) that feminism would bring I often had to defend what I didn’t understand.

So, a couple of years into acquiring my undergrad in feminist theory, I looked around at my fellow feminist scholars and yeah, I could count a lot of lesbians.

(This became the topic of my final paper in that class, email me and I’ll totally give you a copy if you love wordy and pompous academic papers.)

I realized how wrong I am to defend certain ideologies as empirically good and true and not the byproduct of certain identities and geographic location. A more informational (and honest) analysis would be to explore why and what certain identities push us to radicalism.

Our national political landscape is proving to be polarizing. Hate crimes are on the rise. White supremacy is trendy. Racism, anti-Semitism, ethnocentrism and all their ugly cousins have come out for a rowdy, obnoxious family get-together.

In all of this commotion many people are asking themselves “What the fuck?”

Shock and disgust have pushed some people into activism. In Fort Collins, new groups formed in the name of progressive action and resistance.

Although they are likely also disgusted, many people aren’t shocked — people who already had to be radical.

Very soon after white supremacists rallied in Charlottesville, ending in the death of one counter-protester, a paper noose was found in a residents’ hall at Colorado State University.

The paper noose was placed in the hall of the building’s only Black RA.

In interviews the student is upset, but not surprised. He told the Collegian that he felt targeted, but not shocked.

Ask a person under DACA if they’re newly afraid of deportation and displacement.

Last spring, I wrote a feature on a sophomore CSU student under DACA. When I asked her about Trump and the possible end of DACA, she cried.

But she also made it clear that every year under DACA was precarious. It took bravery to give the government her fingerprints. Every college party held for her different consequences.

She had to be perfect, there was never security.

Ask a survivor of gender-based crime if they feel universities no longer have their back.

When I wrote a feature on a college basketball star’s ex-girlfriend looking for justice following what she felt was an abusive relationship, she told me she felt abandoned by her university’s Title IX coordinator.

This was more than year before Secretary of education Betsy DeVos announced what is looking like a rollback on Title IX.

Some people have always had to be radical.

I don’t think that radical ideology being the byproduct of identity is a particularly profound thought, in fact, it seems a little obvious. But I can admit there are flaws in the logic.

For one, not all women are pro-woman. Not all people of color feel oppressed. Some working class folks are under the impression that rich people deserve to be richer than them.

Having a marginalized identity isn’t always enough to push a person to radical thinking. There has to be some privilege of position and knowledge of self.

But in general, people are endowed with a better grasp of social issues when they’re in the line of fire. I’d call it the epistemological privilege of being in a subordinate position. In other words, you know what you have to know to survive.

Black Feminist icons Barbara and Beverly Smith describe this in Across the Kitchen Table a Sister-to-Sister Dialogue, when they talk about feminist “clicks,” and, more insightfully, the lack of them for Black women.

While describing how women’s social movement differs according to race and ethnicity, Beverly tells her sister, “This ties in with another thing we had talked about in the past, which is the difference between women’s politics, who come to a realization that oppression exists say, at age 22, 25 or even 18, versus Black women’s and other women of color’s perspective which is that your oppression is a lifelong thing.”

The Beverly sisters had this conversation in 1980 and more than three decades later their contemplations still feel topical. Some people are radical because their existence demands it.

A large amount of neo-Nazis and white supremacists could also claim their location has necessitated radicalism.

Interconnectedness is a fundamental part of Buddhist philosophy. I recently read the Bodhicaryāvatāra by Sāntideva. What struck me the most was the idea that nothing happens independently. The Beverly sisters are radical because of their location, and maybe David Duke is radical because of his location. We are a product of our environment.

With this in mind, an updated thesis might read, “We do what we think we must do in order to survive.”

But I refuse to humor the idea that whiteness is struggling for survival. Understanding how our politics are the byproducts of our identities can help us understand those that are different from us, it can even help us have compassion for them.

However, there is a difference between being forced into radicalism out of the need to survive and being radical to maintain dominance. I would like to focus on the former.

So, if you’ve bought that location (literal as well as geo-political) necessitates radicalism, then there’s a second point here.

If your location and identity have not demanded you to be radical, how can you be an ally and be sure you’re doing it right?

I think the secret sauce is care.

The most intense, and ridiculous, example of doing it wrong is Rachel Dolezal, infamous for passing herself off as Black while she held a leadership position in a chapter of the NAACP and taught African-American studies.

Part of what was so confusing and frustrating about Dolezal was that she could have admitted that she was an ally. She could have entered into pro-Black communities as a white woman who loves Black people and Black culture. Certainly activists would have challenged her on grounds of fetishization, they would have questioned her intentions and mostly questioned her knowledge.

And I think that’s what she was afraid of.

I think she was unwilling to admit a lack of epistemic knowledge.

I don’t believe most people take her approach towards social justice, there are probably quite a few other issues at hand in this situation, but I do think people have this fear. Can precocious academics admit they don’t know something? Can stubborn radicals in their studded jackets admit they’ll neverknow something?

An instructor I admire once asked a class of mine who we knew. He asked us how old they were. What age are they? What language do they speak? Who do they pray to?

He was trying to get across that what you know about has a lot to do with who you care about.

So if you want to be rad, locate yourself and care about others.