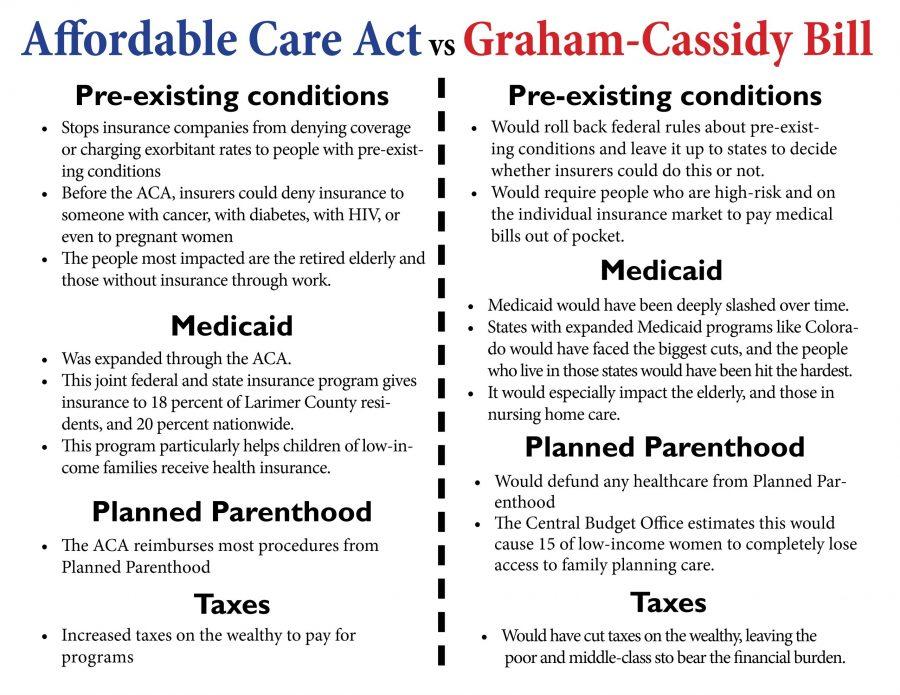 Ding, dong, the bill is dead.

As of yesterday, the Graham-Cassidy bill is dead. This latest attempt to repeal the Affordable Care Act was nothing short of inhumane, and everybody should be breathing a sigh of relief that it didn’t even make it to a vote.

Senate Republicans called off the vote on the bill in the final days before time is up to repeal Obamacare. It is clear, Mitch McConnell reasoned, that with Senators John McCain and Susan Collins coming out against the bill, there is no way forward where the bill could pass.

As a public health graduate student, I spend a lot of time reading about and studying the governmental actions that can impact our nation’s health. This has led me to several conclusions: First, that the Republican attempts to repeal and replace the ACA are not based on a genuine desire to help people, and second, that many people in the community don’t understand what the ACA does, or what would really happen if the efforts to repeal it were successful.

When the mess of repealing and replacing the ACA began, Trump said, “Nobody knew healthcare was so complicated.” This is, of course, ridiculous. Plenty of people know how complicated healthcare can be. That’s why the Affordable Care Act is nearly 1000 pages long.

The American Medical Association has spoken out against the Republican efforts to repeal the ACA, but their complaints have fallen on deaf ears.

Here are some things everyone should know about why experts thinks the Republican bills are falling short, both on a national scale and a local one.

These are just a few of the many, many ways the healthcare of the average person could have been decimated by an act so narrowly avoided, and a few reasons everyone should be thankful it did not even get put to a vote. Obamacare is not perfect. It does struggle to live up to the ‘affordable’ part of its name, and middle income families especially may find cost of insurance to be detrimental.

More absolutely needs to be done to fix healthcare – but repealing and replacing Obamacare with a bill that would cost millions and millions of Americans, especially poor and middle-class Americans, their health insurance is under no circumstances the way to do it.

Moving forward, the most important thing is to have a populous that knows what’s going on and can understand the issue at hand. Representatives and Senators need to feel pressure from constituents so they will be held accountable for the vote.

The local Senator is Cory Gardner. He has an office right here in Fort Collins. He never announced how he would have voted on the Graham-Cassidy bill had it made it to a vote, but he supported the previous attempt to repeal Obamacare. The people who he represents need to work together to hold him accountable.

College students especially need to take responsibility for educating themselves on important national issues like this. It’s not always easy, but it has to be done. The Flat Earth Society is on the rise, the rate of vaccine-preventable diseases is increasing, and climate scientists are being ignored in government.

Those in a place of research and education have a duty to stand up for science and to stand up to facts. We are here at a university to learn – so we need to put in the effort and learn it, even when it seems too complicated. It’s worth it in the end, because by striving to be an educated population, we can force our government to make decisions based on facts, not simply toe the party line.

I encourage everyone to be engaged citizens and really learn about the issues at hand. For anyone particularly interested in this issue, the book ‘Reinventing American Healthcare’ by Ezekiel Emanuel is an excellent place to start.