Brust: This election season shows how weak Americans are 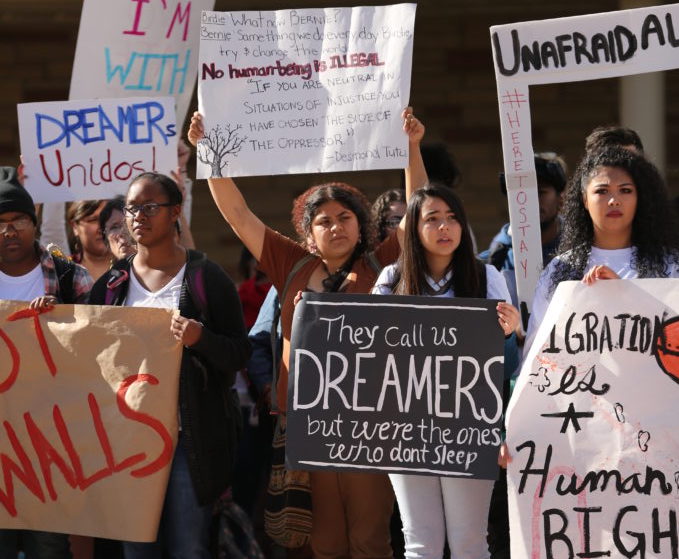 Supporters of DACA hold signs in support of DACA, and the rights of undocumented persons at Colorado State University during a rally in the Plaza in February. (Forrest Czarnecki | Collegian)

I thoroughly believe that this election season has unveiled how pathetically weak the American people are.

I am not only talking about the onslaught of whiney liberals, I am speaking to all of America based on the reactions after the election regardless of party affiliation.

First let’s talk about the more obvious group: Liberals. As a liberal myself, I was devastated after the election. As a politically active, educated woman, it was heartbreaking for me to see Trump become the president elect after seeing his views on women and minorities throughout his campaign. That is fine; It is my right to be angry that my candidate didn’t win. It is the liberal Americans right to be angry about this election.

However, many of my fellow liberals took a different approach to not getting their way. Violent riots, burning of American flags, and even professors canceling class because of the outcome are just a few drastic measures taken after the election. I have even seen multiple petitions going around trying to abolish the electoral college. One of my teachers on Wednesday walked into class bawling.

I mean… seriously? We have become the equivalent of a child having a tantrum after being told he can’t have a sleepover.

On the republican side (more-so just the republicans who voted Trump) there has been a totally different attitude about the presidency. First of all, the complaining that you are being “discriminated against” for being a Trump supporter is flat out embarrassing for a couple reasons: 1. There are people in this country who will endure more discrimination than you could ever fathom after the election because of Trumps social impact and 2. Being discriminated against for your political choices is such a low form of bias it’s silly to be angry over it.

Also, although liberals are overly whiney this election season, stop trying to defend Trump when people say they cannot support him because of the way he treats minorities. If you are not a minority and you argue that Trump loves all minorities you cannot speak on the subject. Do not make people feel like they don’t matter because of their race, gender or religion. If you are either white, male, or both, do not think you can tell minorities how to feel about the outcome.

So here’s what I have to say to both sides of the spectrum.

If you are that disgusted by the outcome of the election; do something about it. Believe it or not, there are ways to protest decisions that are not whiney. If you are like me and cannot believe someone who degrades women is your president, you have the right to fight. Understand, though, that complaining on Facebook or burning an American flag isn’t fighting, its trying to get attention for doing nothing. Write a letter to legislature, join a rights movement, and use your talents to be a voice for the marginalized instead of complaining while the marginalized are struggling beyond your comprehension.

Understand that this election is like no other. The selection in candidates this year is unparalleled to anything seen in the past. Understand that liberals can be angry about this decision. Step into the shoes of a minority and understand that telling them to deal with their problems while having a president so vocal about his biases is very disheartening. To continuously belittle those who have less of a voice than you just means you’re a bully. Solidarity and understanding is strength; boasting and belittling others for their views is weakness.

Basically to sum it all up we need to stop whining. Liberals, if you’re going to fight against the presidency, do it with dignity. Conservatives, if you are going to celebrate your win, do not do it in a sore-winner fashion. Let’s make America less pathetic again.