Thompson: The Dakota Access Pipeline project should be stopped 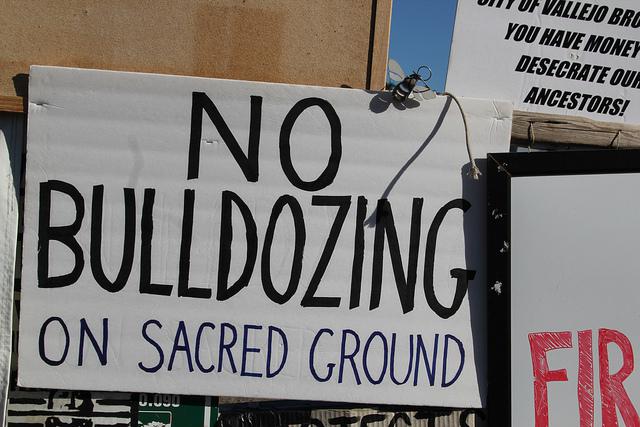 Last Saturday, conflict erupted at the site of the Dakota Access Pipeline Project in North Dakota, as members of the Standing Rock Sioux Tribe protested while bulldozers tore up a 150 foot wide, 2 mile long stretch of sacred land near their reservation. What began as a peaceful demonstration quickly evolved into a violent outbreak, during which Energy Transfer Partners’ security dogs bit the protestors and nearly 30 Natives were pepper-sprayed as they stampeded the site. The bulldozers eventually retreated in lieu of a temporary halt to the project, which will be re-evaluated in an upcoming federal court case.

The Dakota Access Pipeline Project poses several issues that lead me to disagree with the company’s decision to perform construction along the southern edge of North Dakota.

First of all, Energy Transfer Partners successfully evaded certain legal factors during the process, which seems to me like a problem rooted in apathy regarding the culture of those most affected. Not only did the Tribe not have permission to assess the land until just several days prior to the onset of construction, but the workers began turning up the soil a day after the Tribe filed court papers stating that they had discovered areas of “significant cultural and historic value” in the pipeline’s way. The company’s decision to begin construction despite the Tribe’s findings is therefore a violation of the National Historic Preservation Act of 1966, which protects “the historical and cultural foundations of the Nation.”

Aside from the legality of the issue, there are environmental risks involved in the Dakota Access Pipeline Project—mostly pertaining to the Natives’ primary water supply. If the project should resume, the pipeline will be constructed across both the Missouri and Little Missouri rivers, carrying with it 500,000 barrels of crude oil every day.

Although Energy Transfer Partners claims that the pipeline “will be built and operated using the most advanced technology and monitoring systems to make it even safer,” past instances of pipeline failures give the Tribe good reason to worry about the impact it may have on their drinking water. Take the 2015 crude oil pipeline burst in California, for example. The shoreline was destroyed and hundreds of sea animals died—and that was ocean water, not the valuable drinkable water that sustains thousands of Natives on the reservation and downstream.

Yet what upsets me most about the Dakota Access Pipeline Project is the company’s willingness to further destroy the sacred land of an indigenous people whose ancestors suffered a mass cultural genocide—all to the benefit of the United States economy. During the bulldozing on Saturday, ancient burial grounds, cairns and prayer sites were annihilated, along with any other cultural artifacts hidden among them. Centuries of history were carelessly demolished, despite the screams of angry protestors.

Once again, the interests of the dominant culture have taken precedence over those whose voices are less powerful in a capitalist society—the voices of a people who are commonly referred to in the past tense. The erasure of Native Americans in contemporary American society continues to shape-shift in ways that benefit the privileged. In the words of Standing Rock Sioux chairman David Archambault II, “This demolition is devastating. In one day, our sacred land has been turned into hollow ground.”