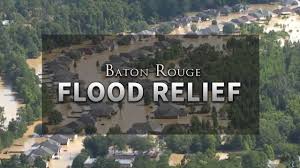 Hurricane Katrina, a category 3 hurricane, hit Louisiana in 2005, causing the Levees to break which further flooded the city. This catastrophic natural disaster caused much devastation to the individuals both living in Louisiana and those whose families lived there. Just eleven years after Katrina, this past August, Louisiana encountered yet another horrendous flood. I had the pleasure of speaking with Bishop Dwight Pate, who is the Pastor of Church Point Ministries located in Baton Rouge, Louisiana, and his wife Sister Sandra Pate regarding the tragedy that this flood has caused.

In this article I would like to show you the importance of understanding the process of how the government gives or doesn’t give assistance during natural disasters, as well as show how essential it is for us as fellow citizens to give help to those in need, regardless of distance.

Bishop Pate described to me what took place in Baton Rouge during the flood. “Our ministry location is under water. Our location has ten spaces, a phone center, theatre, youth center, TV studio, phone center, and banquet hall all on 3 acres of land in a three story building. The flood went through it all. We had to shut the location down.” Sister Pate explained that a third of the members in their congregation are flooded and have lost everything, some of the members they haven’t heard from since the flood took place.

FEMA has stepped in to give aid to the people living in Louisiana, but as Bishop Pate told me they are moving slow while processing claims for financial assistance. FEMA’s overall job is to give aid during hazards that happen in the United States. Thus far, according to The White House, “FEMA approved more than $205 million in financial support to flood survivors in Louisiana.” FEMA isn’t meant to put people’s lives back together, and after a disaster where families literally lost everything, whose life could ever fully be complete and normal again?

With FEMA there are requirements and limitations to that assistance. For example, the limitations for the Individuals and Households Program, or IHP for short, states that, “IHP will not cover all of your losses from damage to your property (home, personal property, household goods) that resulted from the disaster. IHP is not intended to restore your damaged property to its condition before the disaster. In some cases, IHP may only provide enough money, up to the program limits, for you to return an item to service. IHP does not cover business‐related losses that resulted from the disaster.”

As I have described the building space where Bishop Pate’s ministry is located, his ministry is and has been a vital and intricate part of the community and has given aid to thousands of people, but I’ll come back around to this in a moment.

FEMA has health requirements as well, so as these homes are beginning to literally rot and mold from the water, individuals have to wait for inspectors to come to their homes in order to give the “ok” on giving them FEMA assistance. A lot of the issues with FEMA are that they really only target individuals that live in disaster areas that the President has named.

There are individuals who have lost their homes, cars, and in turn their jobs who are now at risk because they don’t have the means to fix what the flood has ruined. About 136,000 workers have been affected by this flood. Bishop Pate also discussed the fact that a lot of his church’s members who lost their homes and everything that they had were older. A lot of the older people didn’t have flood insurance and as Sister Pate said, “because this flood happened much quicker than Katrina, they weren’t warned. They only had enough time to get themselves to safety. In Katrina people were given notice and alerts, and most of the water really came from the Levee breaking. But with this flood there was no notice by the time the flooding came the news didn’t have time to report it”. Twenty counties have been affected, some regions receiving 2ft of water within 48hrs, so the time span in which to prepare to leave was literally none.

During this time, I stayed abreast of the flood taking place in Louisiana, but I wondered why this issue wasn’t particularly a hot topic amongst people right now and asked Bishop Pate his thoughts as to why, “The Olympics were happening during the same time, and was aired more on television than the flood in Louisiana. Some people lost things from two and three generations. The compassion is just not there.” His response, of course, was no surprise to me and honestly one that I had anticipated. How tragic it is to live in a world where people would rather watch USA teams win gold medals than have concern as to how thirteen people died and cities are literally under water.

This brings me to the fact of how detrimental this loss is and has been to minority communities in particular. In East Baton Rouge alone 70,000 homes were flooded. That’s 35.4% of all homes. In the Livingston Parish, 49,000 homes were flooded. That’s about 86% of all the homes in that Parish. As I stated before, a lot of homeowners didn’t have flood insurance to cover these damages. According to RAW News, Only 12.5% of home owners in low and moderate risk flood zones have flood insurance. So, when some of these homes were destroyed, particularly in minority neighborhoods, FEMA suggested that some of these home owners apply for loans to cover the damages. These minority communities are low income and since loans for them are really out of the question, there are entire family homes, generational homes that have been passed down in families, that will never be rebuilt again. This damage is going to take an extremely long time to repair and billions of dollars just to begin. These people need help.

Churches and places of worship are a consequential part of the communities in Louisiana. They give food, clothes, resources in general and as Bishop Pate stated, “Pastors aren’t getting the help they need, and they might have to move. When you strike the shepherd the sheep will scatter (Matthew 26:31). This is what happens when leadership is struck down.” The sheep have indeed begun to scatter, and no one is really concerned about families struggling to put their lives back together again.

In the end I asked Bishop Pate how he continued to be a leader during such hard times and how people could assist them during this time. “It takes patience to lead people with a bad understanding, but if you lead by example they will follow. For example, I’ll let you eat and I won’t, or I’ll teach you how because I’ve been through it first. We take the bullet first. God is going to bring up humble leaders, God will raise up Great Leaders. Someone who is not looking for a party in their name but to help others. I pray God will speed up this process, so we can get out and help others.”

Bishop Pate told me that truth causes you to speak a word that brings life and encouragement to others. True believers love to see others blessed, and as a Christian woman I am a believer and have an immense amount of faith. I hope that if I never write again that this article brought awareness and help to those in need in Louisiana. I hope that as little as this act is, it gives them hope and comfort in knowing that we see them and help is on the way.

If you would like to be of help please make a donation at Bishopdwightpate.com or by texting 2254248400 all flood relief donations go to helping the people who lost everything – houses, cars, jobs.