We need to engage in more thoughtful communication 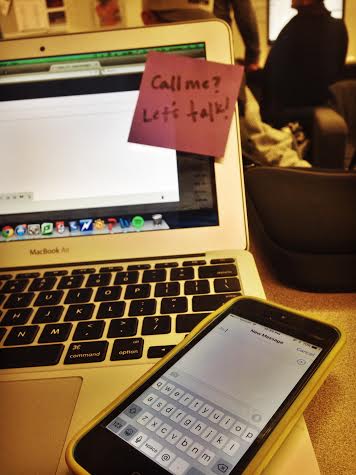 Part of growing up is learning how to interact with others. More specifically, those we do not naturally gel with, and those who we even “hate.”

In high school, it was easy to slack off in this area. Actively avoiding and hating on those who we felt had done us wrong and who obviously deserved revenge was as easy as taking a detour to class to avoid them in the hall, or smack talking them behind their backs.

Dealing with conflict prior to entering college was mediated. Parents, teachers and other authority figures could step in if things were getting out of hand and taking a turn for the worst. Oftentimes, it was nice to know that there were adults that could help in a certain situation — at least for me. It gave me a sense of security knowing there was back-up in case someone was threatening to punch me in the face.

We were pubescent and self-involved — the last thing on our mind was trying to sympathize with our peers. Ignoring the other individual and their emotions was easy, and oftentimes came with no ruffling of our conscious. But this way of dealing with situations did not necessarily teach us about accountability, responsibility and the importance of handling uncomfortable situations with people.

As young adults and college students, pretending that the people we dislike simply do not exist in this world is a bit harder. Hiding in your house with the blind closed and nothing by Enya filling the silence is a good option. But that becomes unrealistic when certain situations arise and conflict has to be dealt with up front. But we have taken up a new form of avoiding interaction with those people — choosing to disregard their emotions, opinions and human autonomy. If they bother us, we tell ourselves they do not deserve our respect. I would argue that this is the mindset for many of us when dealing with someone who has hurt us, annoyed us or eaten our leftover pizza in the fridge.

However, this is the most disrespectful, selfish and dehumanizing way of interacting with others. And it will get us nowhere.

We are an easily offended group of people. If someone we are talking to shares with us a political or religious opinion that differs from our own, we tend to put our guard up, get a little bit defensive and claim that the person is insensitive or oppressive. We back down without giving the other person’s thoughts and opinions any consideration.

Even within personal situations, where you are building a relationship of some sort with another individual, we often let our emotions dictate our actions. This can lead to the other individual in the situation getting hurt and feeling like they have been taken advantage of.

The lack of communication within friendships, or relationships of any kind, shows more about the people involved than anything else. If you choose to sidestep a situation, opting to internalize all your issues or gossip about the other person, you are demonstrating the type of person you are. In these scenarios, you are ultimately hurting someone else by refusing them the respect of open communication.

There’s a certain psychology behind human communication. An article from Psychology Today discusses the basics of this topic, showing that misunderstandings are at the fault of both the sender and receiver. It also lists practical ways of communicating more effectively.

“So how can we get better at communicating based on all of this? I don’t think we need to learn a bunch of tricky ways to phrase things, or subscribe to rules like using ‘I Statements’ or any of that,” the article reads. “Instead, we just need to have better awareness of how messy communicating is, and being more thoughtful about sending and receiving messages.”

This is why animals are so easy and enviable — we do not have to communicate verbally with them, so the relationship between human and pet is sacred and simple.

Communication, in terms of avoiding or fixing a conflict, requires a level of selflessness and integrity — two things we like to shy away from because we may be made to feel vulnerable and uncomfortable.

But it is critical to the adulting process. No one wants to be that adult who is so easily offended, and difficult to interact with. It is admirable to confront conflict with respect for the other person involved. After all, it can demonstrate our true character.

Collegian columnist Zara DeGroot once acted weird in front of Justin Bieber. She can be reached at letters@collegian.com, or on Twitter @zar_degroot.