#SeanPenn and our digital water coolers 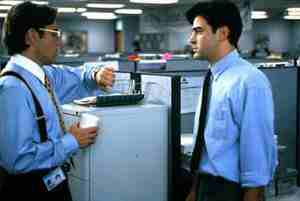 Back in the “olden days” there were only three major TV channels, your nightly TV viewing was a choice between news, news and “I Love Lucy.” When you said, “How about that “I Love Lucy” episode last night, huh?” to your co-workers the next day around the water cooler, they had watched it too. The limited media options meant everyone had the same frame of reference.

Since our media is so varied, this experience would be impossible today.

Even if someone likes the same stuff you do, there is no guarantee they watched say, “Game of Thrones,” last night when it aired. Maybe they will watch it the next day or the next week, or binge watch the entire season when it is over. Or maybe they have found another show they like even more. The numerous options, mediums and niches in media mean people can and have found what they like and how they want to consume it. The chance is very low that someone had the same pop culture experience you did last night.

No more shared pop culture experiences means no more water cooler conversations. We miss shouting our opinions and reactions, and we miss listening to others. So what do we do?

We turn to technology, of course. Instead of face-to-face conversations, we look to “The Talking Dead,” which airs after “The Walking Dead,” to discuss and debrief after the new episode. Or we rely on a hashtag, a podcast, a subreddit, an Xbox live chat, a Facebook feed, a Pinterest board, a blog, a vlog, the options are literally endless. These small digital water coolers all over the Internet have replaced the physical water cooler conversation experience.

I would argue that hashtags are often the most efficient way to feel the sense of community and discussion online. You can search a topic, any topic, and immediately join the conversation.

A perfect example of this is the green card comment Sean Penn made at the Oscars. Everyone I was watching with was shocked, and thought it was, at best, out of place, and at worst, offensive and problematic. One of my friends thought it was very inappropriate and then said, “You what’s even more frustrating? No one is going to be talking about this tomorrow.”

While yes, very few people in our group of friends talked about it on our Facebook feeds, it gained attention in other corners of the Internet and was still trending on Twitter two days later. #SeanPenn gives my friend place to have her feelings validated and know that she is not the only one who thinks this is worth talking about. She is able to have a discussion, hear others’ opinions and add her own.

Finding groups like this online is the natural result of losing these communities in real life. Of course, the water cooler experience still exists in the physical world, but we know it will be easier online. Sharing thoughts and jokes in a group where everyone knows the source material lends for more productive and entertaining discussions. My Oscar night of tweeting, retweeting and favoriting was made more enjoyable by the fact that everyone within the Oscars hashtag was referencing the same thing.

Compare this to Monday morning when I eagerly asked my classmates if they watched the Oscars and I got mumbled responses of, “The Oscars were last night?” These people were not interested in comparing notes on the previous night’s speeches, dresses or Neil Patrick Harris’ performance. And I was okay with that, since I had already had that conversation online.