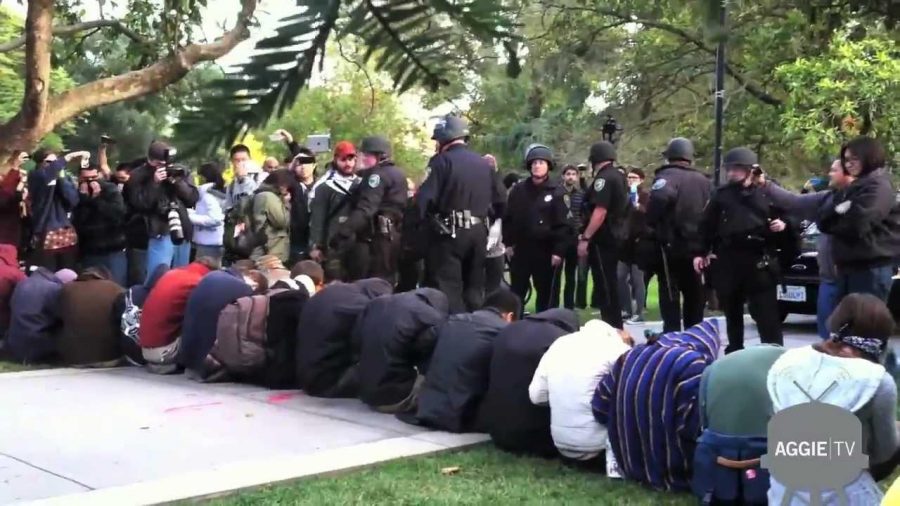 Just as the public finished exhaling from last week’s sports scandal, authorities in New York City stepped into the spotlight and provided another excerpt to a chilling narrative on government control in the States that needs to stop. Following Sunday’s People’s Climate March, the streets of New York City were once again flushed with activists Monday when thousands of protesters shut down New York’s financial district for their #FloodWallStreet campaign.

However, the localized sit-in, aimed at denouncing Wall Street’s role in climate change, received a far less friendly welcome from police; reports indicate that police have arrested countless activists, destroyed protesters’ props and used pepper spray on a nonviolent crowd.  This latest abuse of power by law enforcement is unacceptable and is another clear indicator of the need for change within our country. We cannot stand for repression any longer.

It is wrong to use law enforcement to snuff out minority opinions within society, and it is outrageous that our government empowers this kind of behavior through inaction or outright abetting. While this silenced protest is, on a grand scale, a rather small event, this latest injustice comes on the heels of much larger failings by our justice system. What about the 10,000 complaints of police abuse filed with Chicago’s police department between 2002 and 2004, only 19 of which resulted in disciplinary action? What about the atrocity in Ferguson, where authorities repressed the rights of common citizens and forced out humanitarian organizations at gunpoint? In all of these instances, the push for justice came from the people, while the powers-that-be have done their best to sweep these issues under the rug. Is this what we have come to accept as a society?

We need to demand change within our justice system and within our system of government. It is unacceptable that law enforcement prioritizes protecting the system over protecting the people of our nation. We need to be able to trust our police forces and hold them accountable for their decisions. At the present time, I cannot say that we are empowered to that degree as citizens.  Take the Wall Street protest at UC-Davis in 2011 as example. The student population took a nonviolent stand for principles they believed in, and were assaulted with pepper spray by police.

In this instance, public opinion was violently rebuked because it went against that of those in power. As the famed “Land of the Free,” we cannot stand for such authoritarian displays from our leadership. This latest action by NYC police to shut down protesters on Wall Street adds further illustration to a picture of a system that is content to sweep pressing social issues under the rug and keep the public out of the discussion. One of the main goals of law enforcement is to “maintain order,” but what order is there truly, if you disenfranchise the very people you’re protecting in the process?

In  her recent article, columnist Haleigh McGill wrote in reference to the Free Speech Movement at Berkeley, “Yes, the students misbehaved. They broke the rules, they acted out. But their rebellious ways inspired ground-breaking change and they liberated themselves from unfair administrative control.”  We must harness this same spirit to protect free expression in our country. Whether or not you agree with the protesters in New York or the students in Berkeley, we must stand together in the face of injustice from our despotic system. As voters and citizens, we can no longer defend a system that has shown, from campus lawns to city streets, that it no longer defends us.

Collegian Columnist Sean Kennedy can be reached online at letters@collegian.com or on Twitter at @seanskenn.