The Rocky Mountain Collegian • May 1, 2014 • https://collegian.com/articles/opinion/2014/05/letter-to-the-editor-slowing-immigration/

Letter to the Editor: slowing immigration 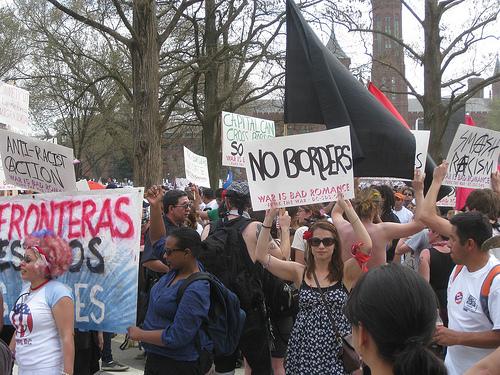 The prevailing wisdom holds that America is a “nation of immigrants”. It is taken for granted that immigration can only improve this country, giving our economy the fuel it needs to continue the last half-century of unparalleled dominance we have enjoyed. But is this really true? Is there a limit to the number of new immigrants the United States can absorb before it becomes a detriment rather than an advantage?

The harsh realities of supply and demand imply an answer that many of us may find uncomfortable. As new workers immigrate to the United States, our supply of potential workers increases. This serves to drive down wages, worsen working conditions, and increase unemployment.

It is difficult to overstate the negative effects this has had upon working-class Americans, the real losers under the current system. The average unskilled immigrant household takes up nearly $20,000 more per year in government services than they contribute in taxes. This places a considerable burden on the welfare system, already strained to near the breaking point, that millions of America’s most vulnerable workers rely upon.

However, immigration’s negative effects are far more profound than an added strain on the welfare state. Since unskilled labor is essentially interchangeable, American workers in those sectors have no competitive edge. When large quantities of immigrants are willing to work for significantly less than the native-born, and are less likely to join troublesome labor unions to boot, employers will look first to employ non-natives. We continue to flood a labor market already drowning in cheap labor, with predictable results – immigration has been estimated to be responsible for a 7.4% loss in wages for the poorest 10% of workers. This does not even begin to take into account the increased unemployment levels among low and unskilled workers. The Federation for American Immigration Reform reports that from 2000 to 2007, immigration was responsible for increasing the labor market’s high school dropout supply by 14.4%, a sector that already suffers from a 35% rate of underutilization.

If the American worker, the backbone of the nation, is to be helped, the flow of immigration must be restricted. The current system only favors elite business interests, whose appetite for cheap labor is bottomless. A steady flow of unskilled labor allows them to suppress unionization, drive down wages, and increase profits while pushing the concomitant costs onto strained social welfare programs and, by extension, the American people. We cannot throw our fellow citizens on the altar of corporate profits. Our duty lies with protecting our fellow Americans. But rather than making moves toward providing our most vulnerable citizens with greater security and prosperity, Congress rings with calls to open the borders up more, to grant illegal immigrants what effectively amounts to amnesty and increase annual quotas. Our leaders are locked into a course of self-destruction.

If the leadership will not act to defend their people, the citizenry must force them to. Write your senators. Call your congressmen. If you want to see your fellow Americans protected from entirely avoidable and wholly unnecessary ruin, then help me make May 6th the day our leaders hear from the citizens they represent. Let’s make them understand that both their duty and their political longevity lie with defending American workers with a flood of calls and letters.