The Rocky Mountain Collegian • May 3, 2014 • https://collegian.com/articles/opinion/2014/05/great-findings-in-mexican-ancient-society-by-csu-archaeologist/ 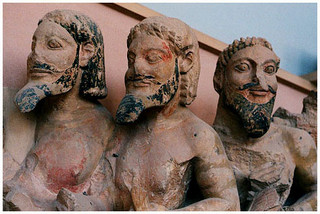 Archaeological work is not so mundane as it arouses the desire to understand human history. Archaeology is an exhilarating field that can lead people to great discoveries whose results can remain to the end of human existence, discoveries that have the capacity to change the human understanding of metaphysics and ontology, discoveries that inform people around the globe of ancient histories that date back to millions of years ago. A plethora of archaeologists unearth human remains and ancient artifacts day after day from ruins and debris that remained buried beneath the soil for centuries. They dig and dig until they finally find what they are looking for and it can take decades before they even find it, but their efforts are perennial.  It’s the concert effort that archaeologists have been putting forth to advance human knowledge. Even though it is hard to fathom who would dedicate all that time looking for something buried underground, the satisfaction of knowing that your discovery can alter the course of world history is a great motivation for archaeology majors.

Here is an example of a Colorado State University anthropological archaeologist whose seven-plus-year research with his team in Mexico has the potential to complete the human understanding of the Purépecha culture. Chris Fisher has been an associate professor for 7 years, from 2008 to present, for the Department of Anthropology at CSU. He has published numerous works of research in a number of anthropology journals including The Proceedings of the National Academy of Sciences, Antiquity, and The American Anthropologist. His expertise is in prehistory and the relationship between humans and past environmental problems. He studies how humans in the past had to deal with environmental issues, just like we are today, and how they have both succeeded and failed. By studying ancient civilizations, he hopes to better our understanding of land changes and human influences of the land.

His recent discovery dealing with the Purépecha culture was located in Western Mexico. Ceramic vessels, rattles and skeletons were found in a cemetery, indicating an era of Postclassic period. Since the Purépecha Empire was associated with rapid social and environmental changes, discoveries about how the people were buried can provide insights about how people lived at the time. He hopes that he and his team will come to a full understanding of this ancient empire after compiling all the research gathered from the past eight years.

The Purépecha people were called Tarascan by the Spanish and their society thrived from 1100 A.D to 1530 A.D. Known for their excellent metalworking skills and producing the best crafts in all of Mexico, people dwelling near Lake Pátzcuaro continue the tradition to this day with the presence of profuse craftspeople.

Funded by national science and private groups, his research is part of a project called “Legacies of Resilience: The Lake Pátzcuaro Basin Archaeology Project,” which is a long-term program that unites archaeologists, geologists and geographers to investigate civilizations in the region of Pátzcuaro, Mexico. The project is based at CSU and Centro de Estudios Mexicanos y Centroamericanos (CEMCA) in Mexico City.

History can be really fun to learn, but discovering history is all the more fun. Even if archaeology is not what you want do, show your appreciation to people who help bring to life the great adventures that date back to thousands or millions of years in history.