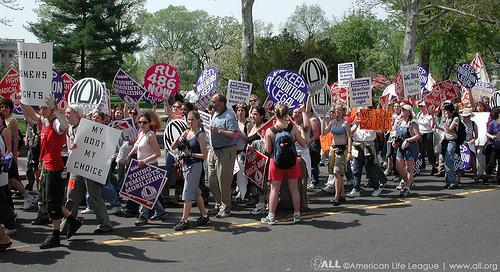 Zane Womeldorph recently wrote that he is uncomfortable with the idea of abortion, that it is a simple fact that abortion snuffs out a potential life, and that there are plenty of convincing moral arguments that can be made against abortion. He recognizes the importance of freedom up to a certain point, and apparently has a great disdain for both sides of what he calls “this tiresome dispute.”

Certainly there are bad representatives, and poor presentations of both positions. Finding fault with them hardly makes a case for any other position though. It would be more worthwhile to explore the reasons for Zane’s discomfort with abortion, the moral arguments he finds convincing and the limits to freedom that he accepts — to see if a “moderate” position is the real answer as Zane proposes.

Euphemisms substitute a vague or mild expression for one that would be blunt or offensive. Though it sounds innocuous, “potential life” is factually inaccurate when referring to the unborn. The definition of potential is: capable of being but not yet in existence. If the child is not yet in existence, there would be nothing to remove during an abortion.

It is a simple fact that abortion snuffs out an actual life, which is a very good reason to be uncomfortable with it. A new, genetically unique human being begins at fertilization. The whole purpose of abortion is to kill that new human being. No woman expects to “terminate a pregnancy” by abortion and go home with her still-live baby in her arms.

Since Planned Parenthood recognizes the benefit of euphemisms, they have changed their description of abortion over the years. Where their literature used to say “An abortion kills the life of a baby after it has begun”, their website now says “Medical instruments and a suction machine gently empty your uterus.” Of what?

Baby is the word everyone else uses during prenatal care. Fetus is for when you intend to kill the same baby. Substitute baby for fetus in the following sentence, also from Planned Parenthood’s website: “In later second-trimester procedures, you may also need a shot through your abdomen to make sure that the fetus’s heart stops before the procedure begins.”

Of course, fetus and embryo are accurate terms for the unborn. They identify stages of development – in this case human development – the same as infant, adolescent and adult. You are not either an adult OR a person. You are both.

Laws obviously establish limits on all sorts of “choices” – like robbery, rape, kidnapping, assault, and murder to name a few. Freedom to drive drunk or run stoplights is restricted – in order to protect the lives of citizens – which is a legitimate role of government.

There is no debate about whether abortion ends a human life. The debate is whether that life has value. The “grey” or moderate position would be that some lives do not. Like those with Down Syndrome and other disabilities, or those conceived in rape or incest.

Rape is a sick, cowardly, despicable thing for a man to do to a woman. Why is it never suggested the he [the rapist] be put to death? That might protect women far more effectively than killing her child. Neither solution can undo the trauma for her. How is any justice served by killing her child? By asking “What about rape?” our culture perpetuates the idea that we should despise those children. If you ask someone who was conceived in rape or incest, they rightfully disagree. They are no less valuable than anyone else.

We fail women tragically if the “help” we offer is abortion. Women have a remarkable capacity to love children – unconditionally and sacrificially. It’s an admirable quality – one that benefits society and ought to be encouraged.

The pro-life position is that every human life has equal, inherent value – no conditions. Certainly not conditions that are totally outside your control – like your race, physical abilities, how you were conceived, or whether you pass a developmental milestone. You qualify for protection simply because you are a fellow human being.

And human beings with a voice should defend those without a voice…like Blacks, Jews, and the unborn. The moderate is content to be silent. “He who passively accepts evil is as much involved in it as he who helps to perpetrate it. He who accepts evil without protesting against it is really cooperating with it.” (Martin Luther King, Jr.)