Filibuster, now an abuse of power 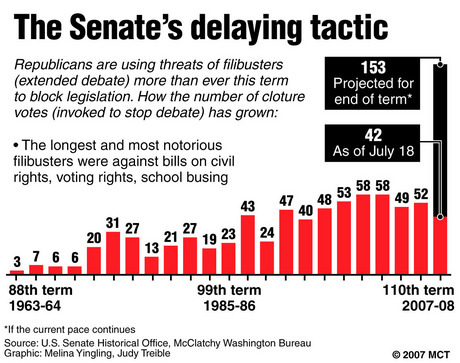 The filibuster is a parliamentary tactic used to delay legislation by utilizing the unlimited debate time in the Senate. In plain people’s speak, it’s how you talk a bill to death.

Now that we’ve got the history out of the way, here’s the problem.

In the past, filibusters have been pretty rare. But, since the Obama administration took the White House, the filibuster has been threatened on just about every issue. In 2009 alone there were 112 calls for a cloture vote to preempt the threat of a filibuster. And now, there is another filibuster underway on the 42nd attempt to defund or otherwise weaken the Affordable Care Act, or Obamacare.

There are good filibusters, and there are bad filibusters. When you are standing in opposition to, say, continued drone strikes in the Middle East or in support of women’s health clinics, that’s a good use of the filibuster. But for defunding the ACA, knowing full well that it would never survive a presidential veto? That’s not a good use of the Senate’s time. There are much more pressing issues at hand.

It would be a lot easier to just win the 2016 election, just saying.