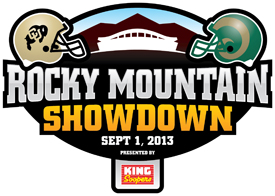 The Rocky Mountain Showdown is right around the corner, which means both football season and the school year are almost here.

One of the most exciting parts of the beginning of the year is Showdown weekend, and this year is set to be one of the most memorable — or not so memorable for some — weekends yet.

To celebrate the first week of school coming to an end, ASAP booked Macklemore and Ryan Lewis to perform Aug. 30 on the CSU Intramural fields. The next morning of Aug. 31, Tour de Fat kicks off in Old Town. The cherry on top of the weekend comes on Sept. 1, as the CSU Rams carry on the tradition of playing the CU Buffs in Denver.

Let’s be honest, ASAP has dropped the ball recently. Concerts — provided on student fee dollars — have been mediocre at best in the last two years. Some, like myself, may argue that the only concert in the last four years that was both successful, and worth the money, was Ludacris in the 2010-2011 school year. So, in my opinion, CSU students haven’t had a legitimate concert in four years. Yeah, B.O.B was decent, but Sean Kingston was so incredibly disappointing that I couldn’t even value B.O.B.

So, this year ASAP booked Macklemore. I believe he will be the most exciting concert CSU has had in recent years, following Ludacris. Topping a few charts in the last year, Macklemore will provide a fun atmosphere for our college’s demographic. Plus, everyone loves themselves a little “Thrift Shop.”

I personally have never had the pleasure of attending this event. Prior to this year I wasn’t old enough to participate in the dominant asset to this event. Also, the Showdown was always happening at the exact same time. By moving the showdown to Sunday, student availability to attend the event will skyrocket. With Tour de Fat and the Showdown not colliding on the calendar, Rams fans can partake in the event and still find a way to root on the Rams.

Much like the ASAP concert series, the CSU football team has been relatively sub-par throughout the past few years as well. To their credit, the players did a fantastic job at bringing home a win for the Rams at last year’s Showdown. That was an exciting environment to be a part of, but the rest of the season was full of some of the most dull games ever played by CSU. Coach Jim McElwain has helped revive the program, and it is clearly only going to get better from this point. The Showdown was fantastic last year with the win, and hopefully this year we will watch the improving Rams — joined by NFL great Joey Porter to the coaching staff — take down the dissolving CU Buffs athletics program.

Judging the book by its cover, the Showdown weekend will be one of the most entertaining ones at face value. As with any book though, sometimes the contents within are not exactly what you anticipated. From the cover, this Showdown weekend looks fairly promising for Rams fans. However, you never know exactly how it will unfold. If Macklemore ends up being a bust, and the Rams fall short, this weekend might be centered around Tour de Fat. However, both the athletics department and ASAP are working on reviving excitement around their programs, and this year’s Showdown weekend might be the pulse-starter they have both been looking for.