Boobs, booze and budgeting: the culture of Halloween changed from innocence to overspending and debauchery. 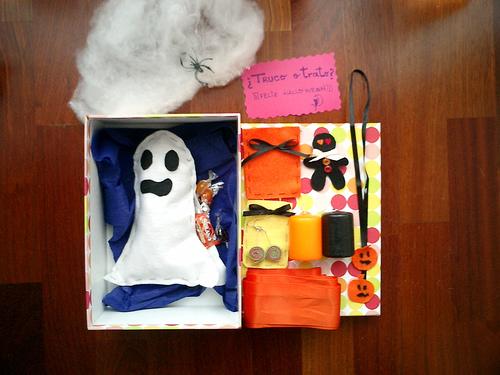 As we approach Halloween, the photos on Instagram of red and yellow leaves (hashtags galore) and the Facebook statuses of “listening to Mumford and Sons on a drive somewhere in the mountains and breathing the fresh, fall air and then headed to grab a pumpkin spice latte/beer and probably take a picture of that too for my Instagram” start to fade out. And yes, I’m guilty of both.

The beautiful autumn aura seemingly disappears as the leaves do, and the eerie feelings set in as “American Horror Story”, “The Walking Dead” and “Paranormal Activity 4” premiere.

I came to this realization in the LSC bathroom late Wednesday night when I found myself checking underneath each stall for “ghost-face” hiding — waiting to stab me. Yes, I opened all the stall doors just in case he was standing on a toilet like in the first Scream — I’m not a complete moron.

Call me creepy, but this is my absolute favorite time of year. With the disgusting amount of horror movies I watch, I find myself checking under the bed and running to my car as fast as I can every night (and checking the back seat — I’ve seen “Urban Legend,” of course).

However, scarier than Michael, Freddy and Jason combined is the fact that Americans are expected to spend a total of $8 billion this upcoming Halloween, according to TIME.

The average American is expected to spend about $160 total on costumes, candy and decorations. I originally looked at this figure and thought no way would I spend that much this Halloween. I assumed that number was for families who actually bought multiple costumes, decorations and gave out candy to kids — no families ever seem to knock on our doors (could be the Keystone boxes overflowing from our trash cans, just a guess).

However, the more I thought about it, the more frightening the figure became — we spend mass amounts of money on our costumes, trying not necessarily to be scary, but — well, you know how Halloween costumes change in college.

Additionally, in college — as we all know — Halloween doesn’t just last one night. As it falls on a Wednesday this year, I can guarantee you the parties and bar specials last every night until Saturday. More nights of Halloween means more money spent on a different kind of “treat.”

I’d guess we’re getting extremely close to that $160 figure.

Halloween has changed from a night where we dress up, have fun and receive mass amounts of free candy to one where we get as drunk as possible and spend unnecessary amounts of money on fleeting things like alcohol and the most scandalous costume we can come across.

Now, I’m definitely not saying not to participate in Halloween — you know I’ll be at the zombie crawl, a haunted corn maze and out at least two out of the four possible Halloween bar and party nights this year.

I’m only saying to watch our consumption this year, think about what we’re spending and what exactly we’re participating in. Embrace the new, but don’t forget about what Halloween meant to you in your younger years.

Be smart this Halloween. First of all, don’t drink and drive because the amount of money that comes along with that is more frightening than anything else I can imagine — talk about an expensive night!

Finally, clean out your trash cans and make your house or apartment look presentable. Make your house welcoming for the little ones and give out some candy if you can — give back the way you were given to as a child.

Oh, and don’t be that creepy person that shuts off all the lights and hides in their house. I hate those people.

Copy Editor Lauren Stieritz is a senior communication studies major. Her columns appear Fridays in the Collegian. She can be reached at letters@collegian.com or on Twitter @laurenstieritz.