Banning smoking at Colorado State would be wrong 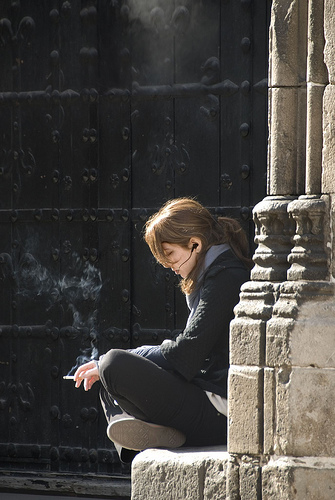 Smokers are annoying. It’s basically a fact. No one walks by a row of people lighting up, smells that gross combination of nicotine, tobacco and rat poison only cigarettes can deliver, and thinks “I wish this happened — everywhere — all the time.”

It’s this widely-shared angst that has led the Associated Students of CSU –– your student government –– to explore whether they should ban smoking (or tobacco in general) from campus. On Wednesday night, ASCSU Health Director Audrey Purdue presented the results of a student government survey that revealed 53 percent of students and 63 percent of faculty and staff support a smoke-free policy.

What’s disturbing is the idea that our student government would ever make the decision to move forward with a ban that would sacrifice minority rights. Especially when their reason would be to satisfy the opinion of the majority of students who think smoking’s just plain annoying.

Rights shouldn’t be overridden simply because they annoy people. Being mildly bothered by someone’s actions is not a valid reason to take away someone’s freedom to do whatever that may be.

Because you know what’s also annoying? Free speech. Those campus preachers –– be they political or religious radicals –– mercilessly harass students who just want to make it from one end of campus to the other in peace.

They may make our brain smoke, but that doesn’t mean we should ban their right to open their mouths.

Purdue stressed that ASCSU is still in the process of collecting the university’s opinion on the issue, promising to hold public forums that would allow students to speak their mind in a more informal way. She also said that student government hasn’t yet determined what they need to know to officially commit to push for a smoking ban.

Student government, as you continue to develop a position, make sure you remember to only limit someone’s freedom when they start to infringe upon the freedom of others.

That hardly ever means taking away the right to be annoying.