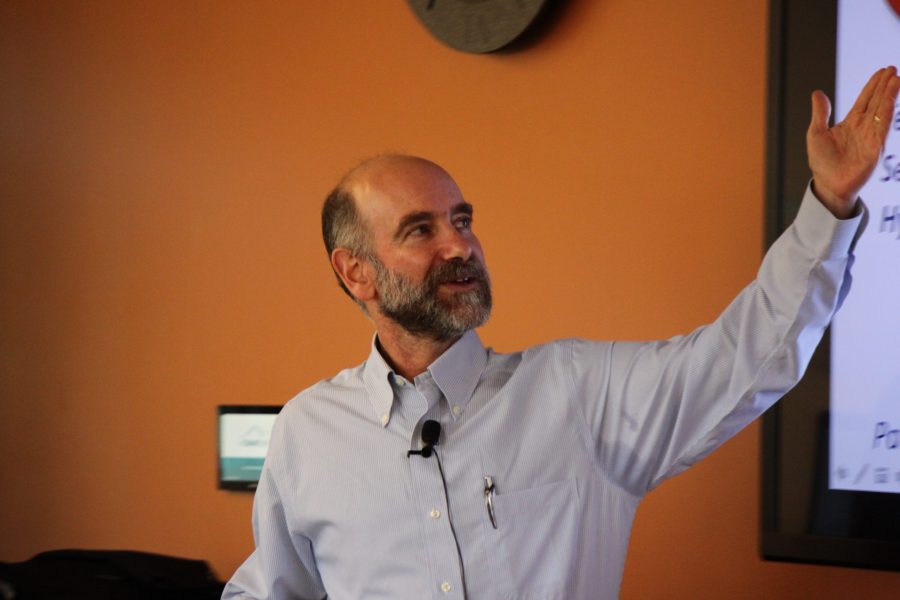 If myopic thinking is what prevents people from taking action against climate change, then Jonathan Patz has a way to get around that.

The professor and director of Global Environmental Health at the University of Wisconsin in Madison gave a lecture Tuesday afternoon in the Lory Student Center about how pursuing sustainable practices can solve many public health issues in a short time frame.

According to Patz, climate change, which he calls “the global climate crisis,” exacerbates health problems across the globe. Climate policy can nullify that and solve some of the other issues.

Patz said that by reframing the concept of climate change in terms of immediate health benefits, it could prompt faster and more substantial action against carbon consumption.

Patz focused on three areas of carbon emissions: the energy sector, food systems that consist of red meat and transportation.

For the energy sector, Patz said reducing oil and coal usage would also reduce the amount of PM2.5, a fine particulate matter produced by the burning of those fuels. PM2.5 is an air pollutant with significant health risks because it can travel deep into the lungs and cause or aggravate heart and lung diseases, according to the Environmental Protection Agency.

Citing a study from 2015 MIT, Patz said the monetary health benefits from reducing such air pollution and the worsening effect of climate change upon that pollution would offset a large portion of climate policy costs.

According to Patz, humans eat far too much red meat.

An article by NPR shows how beef and other animal meat take significant amounts of water, energy and feed to produce the amount of food they put out.

Patz brought up a not-yet-published study he did with food science and nutrition professor Tiffany Weir, where students were fed cricket powder to observe its effect on gut bacteria. They found that the powder promoted one of the most valuable bacteria, but not two other important bacteria. Patz said that, while the red meat substitute is not perfect, cricket powder and mealworm are high in protein and take far fewer resources to produce than red meat.

“We need to think outside of the box,” Patz said. “Already there are companies putting cricket powder into food as supplements. But, this is something unbelievably sustainable.”

Patz’s last area of focus was moving transportation to a walking- or cycling-based model.

“When you think about transportation in the United States and the fact that we have designed cities for motor vehicles instead of for people—we have a problem with sedentary lifestyle,” Patz said.

According to a survey done by the Center of Disease Control and Prevention, nearly 80 percent of Americans do not meet the physical activity guidelines for aerobic and muscle-strengthening activity.

Lack of physical activity increases chances of getting chronic diseases, diabetes, premature death and obesity, according to the CDC.

“I think that this is not an individual choice,” Patz said. “In the United States, if you want to bike or walk, you’re lucky to live in a place like Fort Collins or Boulder or Madison, Wisconsin. But, most Americans don’t have a choice, and I think it’s criminal that we have designed exercise out of the daily routine.”

In a study done by Patz and his colleagues, they found that biking instead of driving short routes could save regional economies $7 billion in mortality and health care costs annually.

“Regardless of one’s views on climate change science, whether or not you believe climate change, who is against physically fit children … clean air from low-carbon energy … and of course, preserving resources to ensure health for the next generation?” Patz said.

During the questions session after the lecture, Ruth Alexander, a history professor, brought up the potential roadblock of implementing climate policy on a political level.

“One could say our public leaders don’t care much about healthcare,” Alexander said.

Patz responded that the transition from nonrenewable energy is economically driven which encourages local institutions to drive the most significant climate policy.

“Washington will probably be the last to react,” Patz said. “Pivot to local leadership.”

At the end of the event, Alex Binkley, a sophomore biology major, said she found the lecture interesting.

“A lot of people have like these counterarguments against climate change, which he really just surpassed them,” Binkley said. “I think it’s really important to get educated about this.”