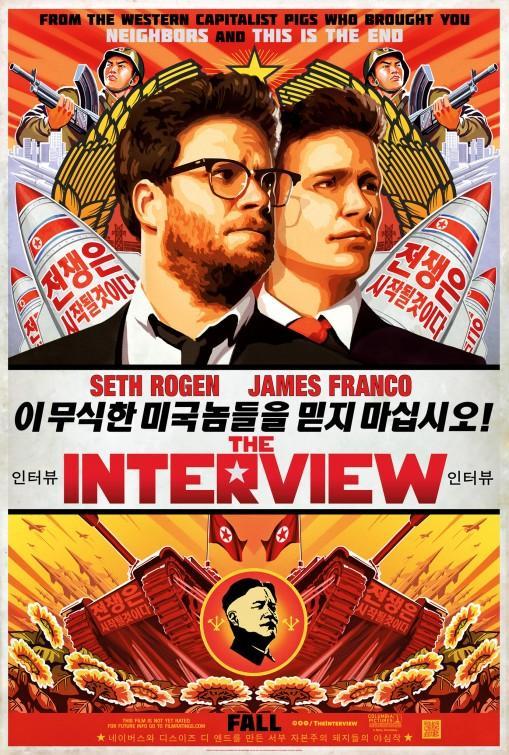 Every so often, there is a film that brings together the American public to rally for something they truly believe in. Last year, that film was not Selma, Still Alice or another dead-serious drama film about a hot-button issue currently plaguing America. It was instead a James Franco comedy featuring a five-minute scene of Seth Rogen shoving an airdropped package up his butt. Yes, after Sony Pictures made the decision to pull The Interview from theaters after threats of terrorist attacks and leaked employee information, a dumb comedy suddenly became a rallying cry for free speech. The film will always be remembered more-so for that fiasco than its actual content, but now that the controversy has died down, one question remains: is it any good?

The Interview stars Seth Rogen and James Franco as a pair of gossip journalists who run a popular show that reports on the important news: Eminem’s homosexuality, Rob Lowe’s lack of hair, etc. After an awkward run-in with an old college friend, Rogen realizes he’s wasting his time and wants to switch to reporting hard news. This ultimately leads to the two taking a trip to Pyongyang, North Korea to interview fearless leader Kim Jong-un (a fun Randall Park). But the CIA intervene and use the interview as an opportunity to off the dangerous president. Chaos ensues.

First things first, if you’re not a fan of Rogen and Franco’s past work, you’re almost definitely going to hate The Interview. They’ve perfected a special brand of humor in the last decade with raunchy winners like Pineapple Express and This is the End, one that understandably doesn’t appeal to some people. I, on the other hand, love most of their work and thought The Interview’s previews looked rather funny as well. Unfortunately, it turned out to be one of the weaker films in the actors’ oeuvre.

It’s not all bad. There are definitely laughs to be had, and a lot of them come thanks to its solid cast. Randall Park’s President Kim is an emotional man who just wants to play basketball and roll around in his tank listening to Katy Perry (that is, until he gets angry), and Park does a great job with the role. Diana Bang and Lizzy Caplan play the two main females in the film, and both are quite memorable. Rogen and Franco are good, but the solid supporting cast really helps here.

The Interview also manages to only throw in one “broken English” joke in its 112 minutes, which is a minor triumph. It actually does an admirable job of mostly avoiding obvious Asian-stereotype jokes, and there’s something to be said for that. Unfortunately, it dashes that goodwill with jokes about butts or defecation about once every minute, which is incredibly annoying and juvenile. For every good quip or glimpse of successful satire the screenplay pulls off, it throws in an instance of groan-worthy toilet humor. And it’s two primary recurring jokes of Jong-un’s lack of a butthole and the inspiration of Katy Perry’s “Firework” are nowhere near as funny as Rogen and company seem to think they are.

It would have been silly to expect an out-and-out political satire from the team behind This Is The End, but I do wish The Interview had leaned further in that direction as opposed to relying on cheap toilet humor. There are moments in the film that approach legitimate social commentary on the role of propaganda and media framing, but they’re quickly undermined by pooping-your-pants jokes. It’s disappointing and makes the film hard to recommend as a whole. Still, there’s worse ways to waste two hours; it feels way shorter than it is and it did make me chuckle pretty consistently. Maybe soon, Rogen and his team will use their comedic talents to make a true statement, but The Interview isn’t quite that film. If the ridiculously named “Guardians of Peace” hadn’t thrown a hissy fit about it, it would’ve been met with a collective shrug.

P.S.: After two years of writing blogs for the Collegian, this is my last ever post. Hope you enjoyed my blogs, because I sure enjoyed writing them. Have a great finals week, and, to my fellow graduates, good luck in the real world.

Zach Johnson can be reached at blogs@collegian.com, and at his Twitter page, @zachandforth.