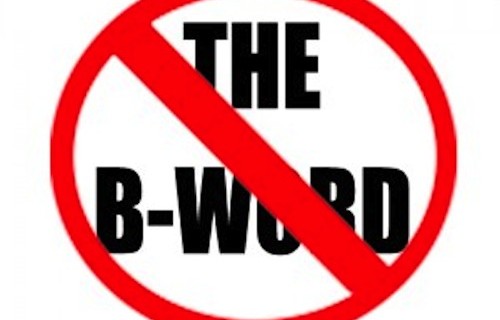 The B-word– you know the one I mean– is a term that has existed in many contexts for many decades. It can mean a lot of things: a female dog, to complain or whine about something, but perhaps most significantly, a non-typical or resistant female. Of all these definitions, the latter is the most frequently used and the most alarming.

As Simone de Beauvoir has written, “man is defined as a human being and woman is defined as a female. Whenever she tries to behave as a human being she is accused of trying to emulate the male”. This quotation demonstrates exactly why the b word is problematic. The way our society is structured, women and men have clearly defined positions and, when a woman steps outside of these boundaries or norms, she risks being labeled as– you guessed it– a bitch.

Even as women have made progress towards equality, unfortunately, the B-word is still around, making it tough for women to achieve this goal, even in language. While the English language has countless slanderous terms for women, there are few words that target men in the same manner. Sure, a man can be called by various insulting terms, but none of them necessarily target him because he is a man. The B-word and similar derogatory terms insult women based on their sex, while insults men are commonly called don’t function in a similar fashion. In fact, the irony here is that, in some people’s opinion, one of the worst things a man can be called actually refers to female genitalia. Now tell me there’s not something wrong with the way our language is structured.

What’s even more troubling is the fact that terms that degrade women are tossed out so commonly. Sure, back in the 60s women believed that reclaiming the B-word was something that needed to happen. Changing the word into a term of empowerment meant showing how women it referred to were powerful, strong, and independent. However, over time, these efforts were thwarted and, rather than using it to strengthen and promote women, it’s being dangerously used as a casual term of endearment.

These days, the B-word can be mentioned at the drop of a hat, whether it’s by a man or another woman. Even though I would never condone any use of the B-word, I feel that it is particularly imperative that women especially eliminate it from their vocabulary. Calling each other bitches is not something women should be saying. Despite its colloquial use, the term itself– even if it is used in a positive context– rarely comes off having escaped all negative connotations. Not only does the B-word reinforce sexist terminology, but as Kleinman, Ezzell, and Frost (2009) point out, it deteriorates the link between the word and it’s patriarchal roots. Whether it’s in pop culture, among a group of girlfriends, or in another context, the B-word used as a term of endearment is not something that we should be perpetuating, but rather is something we should be fighting.

So, before you utter the B-word under you breath after a coworker does something less than considerate or when you jokingly refer to your best friend in the same manner, reconsider the vocabulary. Removing the B-word from our lexicon is something everyone should consider because it will limit the discrimination people face and create a less sexism driven language. The bottom line is, the B-word is a term that degrades people of both sexes and by refusing to use it, we are refusing to give it power and in the end, that is all we can ask for in our movement towards equality.

Maddie Gallegos can be reached at blogs@collegian.com or on her Twitter page @MaddieGallegos.