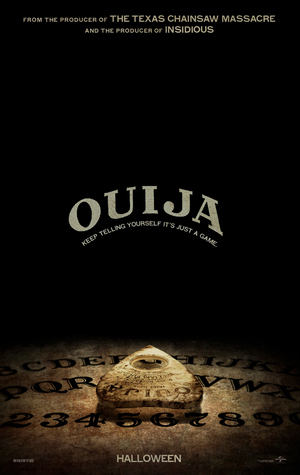 We find it kind of silly when big studios make movies based on board games (like, why is there a movie based on Battleship and why does it have aliens?!), but one game that has kind of slipped through the cracks is the Ouija board. Manufactured since 1901, the paranormal helper has been a cash cow for multiple businesses, most recently Hasbro. It’s also been used in a ton of films, starting with The Exorcist in 1973. Looking to make a little extra dough, Hasbro co-produced a cheapie film based on their trademark last year. The result is Ouija.

The plot is pretty simple: a generic teenager finds a Ouija board in her attic, summons a less-than-pleasant spirit and is killed in the opening scene. Her generic teenage friends try to get to the bottom of her mysterious death, but in the process, awakens the same spirit (using their trusty Hasbro-trademarked device!) and are killed one by one. Can they stop it before there are no Gossip Girl acting rejects left?

First off, what a genius marketing technique, Hasbro: the selling point in your 90-minute commercial is that your product will kill everybody who uses it. It’s a unique strategy, let me know how it works for you. Unfortunately, that’s about the only unique thing about Ouija, which is cut-and-dry horror-by-numbers. The screenplay literally has zero original ideas, to the point where it would make a pretty fun game for horror nerds to pick out which movie they’re ripping off this scene.

The actors look incredibly bored, like they know this isn’t going to be the career breaker they were probably promised. In the lead role is Olivia Cooke of Bates Motel fame and she practically sleepwalks through the entire movie; luckily, no one around her is doing any better of a job, so she’s not shown up or anything. Everybody is so wooden (except for the always awesome Lin Shaye, who is unfortunately only present for about five minutes) that it must be at least partially the fault of first-time director Stiles White, who has some impressive special effects credits under his belt but shows absolutely no panache here.

Admittedly, nobody’s given much to work with. The dialogue is more often laughable than suspenseful, and every scene only exists to slightly further the narrative, forgoing character development or interesting tangents. White doesn’t want the crowd to stop and smell the Ouija roses; he wants you in and out of the theater in record time. No time for anything but business. Because of this, it never quite gets a tone established; it all just kind of floats by. Also, plot points seem far too convenient, showing up at just the right moment for the sole reason of keeping the film going. Most ridiculous was Cooke randomly finding video footage of her dead friend using her Ouija board at just the right time; why the hell is this girl documenting her entire life in the first place?

Before I throw Ouija into the doghouse of horror films, I must say that I had fun watching it. This is a brews-and-friends type of horror movie; it’s not scary in the least and is most effective when you have a group of friends to mercilessly tear it apart with you. I don’t know if I have a single reason to call Ouija a good film, but I would be lying if I said I didn’t have a good time with it.

In the end, there’s a lot of films dealing with Ouija boards, and that means you have a lot of better options at your disposal. My personal recommendation is 1986’s Witchboard, which is even more fun and adds suspense into the mix (even though it does feel pretty dated at this point). But if you’re looking for a stupid movie to accompany your beers and friends, Ouija fits the bill. Just don’t expect it to stick with you for more than a week.