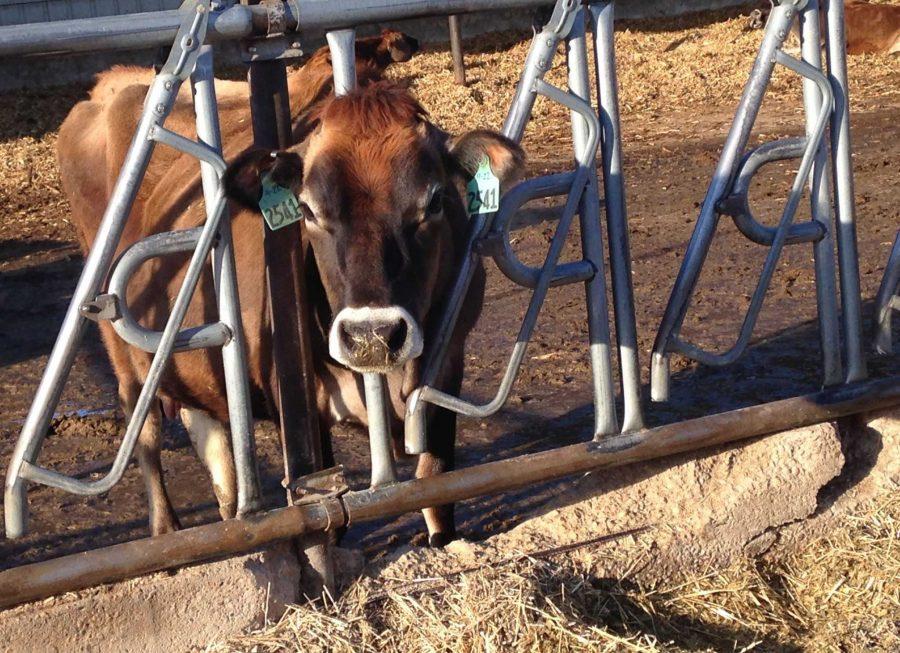 A pregnant Jersey cow eats leisurely at the rail in the close-up pen. Along with her other pregnant pen-mates, she has about three weeks until she calves and can easily be monitored here. Photo by Dixie Crowe.

Learning about the world through stats, tables and facts is a normal part of most classes. However, guest speakers, hands-on experiences, and field trips make learning in animal science classes dynamic and memorable.

Last week, the livestock practicum class took a field trip to Diamond D Diary near Longmont, Colo. Jim Docheff, a CSU alumni and fourth generation dairyman, led the students through his operation explaining the changes they’ve made to their business over the years. They’ve grown their operation from 65 cows in 1987 to 650 Jersey and Holstein cows on 80-acres today. Their son has also joined the business as the fifth generation dairyman.

Pregnant cows three weeks from calving live in an open pen called the close-up pen where they can easily be observed. The diary’s reproduction program is completely done with artificial insemination and they calve year-round. Docheff said that using tracking software and good management practices, they consistently hit higher than industry-standard rates for conception and pregnancy. While some cattlemen focus on increasing calving ease when choosing sire genetics, Docheff said this was not their focus for sire selection.

“Feed them right, grow them right,” said Docheff. “They’ll grow out and we don’t have any problems.”

The dairy gets all of the feed products from local farmers. Their nutritionist produces a total mixed ration specifically to meet the high-energy demand of cows in milk production. The farmers in-turn are able to use the manure as fertilizer for their crops.

The cows in milking rotation live in an open-stalling system. The three-sided barn provides shelter from wind and storms, but allows plenty of fresh air and sunshine in. Each cow can choose where she wants to lay down in the sand bedding and when to eat along the rail after the main morning feeding.

The Diamond D Diary takes animal health seriously and they keep the cows’ hooves trimmed and work to reduce mastitis with proper procedures during milking. Sick cows are placed in a separate pen and treated by a veterinarian. They are milked daily, but their milk is dumped because of the medications they are given.

The 50-year-old milking parlor is a double-eight herringbone style walk-in parlor where the cows are milked three times a day. The cows’ udders are sprayed with an iodine wash. Then they are wiped-off with a separate towel for each cow before the milking equipment is attached. After each milking session, the udder is sprayed with an iodine, glycerin, lanolin dip to help protect the teats from mastitis infections and cold weather. Then the equipment is rinsed with a hot water flush, followed by an alkaline flush, an acid flush, and a sanitizing flush.

Every batch of milk is sampled and tested for antibiotic residue at the dairy to make sure that it doesn’t get into the food supply. The milk is tested again at the plant. The Diamond D Dairy won an award in 2009 for adopting and implementing best practices under the Beef Quality Assurance program. (See their award video here)

“Every drop of milk is sampled to create the safest product for consumers,” Docheff said.

For students, the opportunity to see a family-run dairy that manages their herd to produce a high quality product goes beyond textbook learning.

“I always value the opportunities to get out and experience the cattle industry first hand here at CSU,” said animal science student Jessica Spear. “The trip to the dairy was especially fun because I come from a commercial cow calf background and the dairy tour was a very welcoming exposure to the dairy-side of things.”

Dixie can be reached at blogs@collegian.com or on Twitter @livestocklounge

All lectures are open to the public, but locations were not available at publication time.