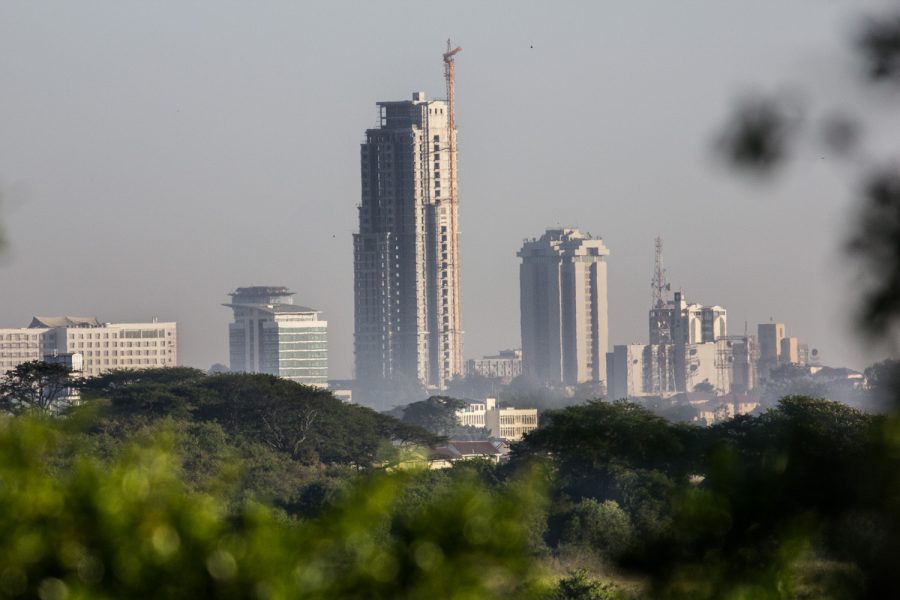 The skyline of Nairobi from inside Nairobi National Park.

Nairobi National Park is not fully what you’d expect when you think of a safari or the the landscape of Kenya. Many people imagine a vast savannah that stretches to the horizon, maybe a few acacia trees here and there, as well as some exotic game lurking in the bush. For the most part, Nairobi National Park fits that description.

However, on three sides of the park, the boundary is outlined by an electric fence because it is mostly surrounded by a major city. The fence is there to prevent the wildlife from wandering into the city of Nairobi. Since the park is so large, you cannot hear the sounds of the city from the center, but you can easily see the city’s skyline from anywhere in the park. On one side of the park, buildings loom over the savannah and construction projects surround the boarder of the park, while the silent solitude of  the middle of the savannah is often interrupted by jumbo jets that routinely fly overhead to land at the nearby Jomo Kenyatta International Airport.

When I had the opportunity to visit the park, it seemed surreal because of the stark contrast between a metropolitan area and the wilderness. I visited Nairobi National Park with the Culturs Global Multicultural Global Magazine team, and our goal was to arrive at sunrise and go on a game drive. The park opened at 6:00 a.m., and I found it odd that we needed to leave our temporary residence at 5:45 a.m. To put it into perspective, it is only a 15-minute drive from the city center to the edge of the wilderness.

Once we got to the park, we noticed some people at the gate. At first, we didn’t realize they were park rangers because they were dressed in military fatigues. They had complete military outfits including combat boots and military insignia. Their presence was somewhat intimidating because they all carried assault riffles. Obviously, there are major differences between the rangers for the Kenyan Wildlife Services, and the rangers you see from the United States National Park Service. However, the rangers from both countries function in a similar manner. They are there to inform guests about the park, answer any questions, enforce park rules and make sure the wildlife is protected. The major difference is that the stakes are higher because the game in Kenya is highly sought after by poachers, and sometimes firefights or shootouts can ensue over the rare and endangered animals.

After we entered the park, we drove through some dense shrubs for about five minutes, and then we were presented with a view of the wide open savannah. Not to sound cliché, but it did resemble a scene from the “Lion King.” However, the one exception was the row of skyscrapers that were to the west of us. Immediately after driving a mile or two, the CB radio in our van crackled and a voice exclaimed “lions!” in swahili. Our driver picked up the  microphone of the CB radio and asked for the location.

As an aside, what really helped our game drive was the communication amongst the other vehicles. Each car went about its journey through the park. If something interesting happens, or a rare animal is spotted, it is customary to make an announcement to all of the other vehicles. If your vehicle is nearby, it may be worthwhile to change your plans and drive to the scene. This system of communication is great for allowing guests to improve their odds of seeing some of the rarer animals. In addition, it improves the safety for all of the park guests, because they are in constant communication with the other guests.

After we were told of the whereabouts of the lions, we drove another few miles, and noticed four or five cars parked on the side of the road. It took us a moment to comprehend what the cars were looking at until will saw a lioness pop out of the bushes beside the road. After the lioness started to cross the road, we noticed some playful cubs trailing behind her. As amazing as it was to see lions in the wild, the animals seemed to show some familiarity with humans. Before going to the park, I expected most of the animals would keep their distance from people and their vehicles. I suspected that they would keep a low profile and just lurk in the bush. These lions basically paraded around our safari vans, and the noise of the engines, clicks from cameras and the “oohs” and “aahs” of park guests did not seem to phase the lions at all. Since Nairobi National Park unofficially doubles as a wildlife preserve, more guest are able to visit the park, and rangers or monitor the animals closely. By seeing so many humans, I assume the animals naturally get closer to humans.This complements the fact that the park is a boundary between the city and the wilds of Africa.

Since this was the first park I visited and my first game drive, I was left with a mixed impression. On one hand, seeing the savannah and getting my first glimpse of the wilds of Africa was an exhilarating experience. I got to see many of the wild animals including lions, hippos, buffaloes, wildebeest, zebras and rhinos, all on my first safari. However, there seemed to be this unnatural acclimation between the animals and the park guests. I do value the park, and feel as though it is important to conserve the wildlife (especially the endangered species), but I was left wanting to experience the truly wild side of Kenya.