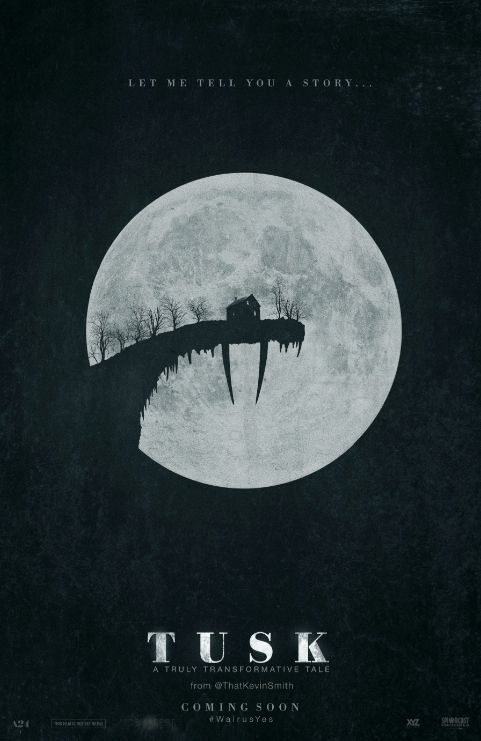 Everybody watch the Oscars? They were surprisingly fun, and I was caught off guard by some of the Academy’s picks. I kind of assume the ceremony will always put me to sleep, but it was actually a good time this year. So, in ho

nor of the Oscars, I decided to watch Tusk this week, which received a truly astounding zero nominations. I can’t imagine why.

Considering Tusk turned in the 67th worst opening weekend of all time (for wide-release films), I’ll go ahead and assume most of you are unfamiliar with its concept. It stars Justin Long (Mac guy) and Haley Joel Osment (Sixth Sense kid) as two podcasters who produce a raunchy show that spends most of its time making fun of people. But Long gets his comeuppance during a trip to Manitoba, where he meets an old serial killer whose M.O. is turning his victims into human walruses. No, you didn’t read that last sentence wrong. Tusk is about Justin Long being transformed into a walrus.

If you’re like me, that synopsis made you giggle a bit and maybe consider taking some time out of your day to watch Tusk. You’re about to make a huge mistake. To save yourself over 100 minutes (think of what you could do with 100 minutes — that’s like four episodes of Friends), just scroll back up to that last paragraph, read my synopsis one more time, and move on with your life. Because that’s all the movie is.

And Tusk feels like it. It goes on for an interminable 100 minutes, at least 75% of which is pointless filler. Smith has nowhere for his script to go and fills time with lame Canadian jokes (heh-heh, they say eh), monologues by Johnny Depp doing a French accent, and endless poem recitals. You can almost feel the time passing, and it’s a guarantee you will ask yourself what the hell you are doing with your life at least one time while you watch it.

For being made by a writer/director so rooted in comedy, it’s almost astonishing how unfunny Tusk is. The jokes are so obvious and humorless, you start to wonder if they were meant to be jokes at all. It almost would have been better if they went completely straight-faced with it, taking the approach of The Human Centipede, but the attempts at horror are bogged down by endless scenes of pointless supporting characters doing nothing at all.

I had never heard of Tusk until a friend told me about how awful it was, begging me not to watch it. Being the cinemasochist I am, I rented it anyways. Please don’t make the same mistake I did. Tusk is not “so bad it’s good,” it’s just one hundred minutes of your life that you will never, ever get back. Dear reader, trust me when I say you are too good for Tusk.

Zach Johnson can be reached at blogs@collegian.com or on his Twitter page, @zachandforth.