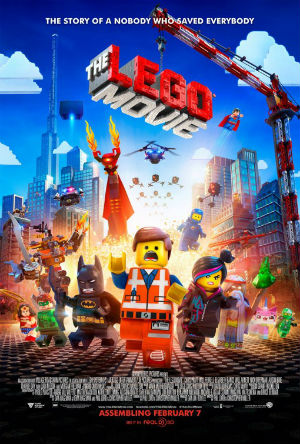 There’s no reason that The LEGO Movie had to be any good. First off, children’s movies are catering to the lowest common denominator, and most feel like it. Sure, the filmmakers can try and impress the parents and make something halfway worthwhile, but why bother when you already have millions of drooling young consumers on your side no matter what you churn out? On top of that, nobody’s expecting a film based on toys to be any good. Battleship, Transformers and G.I. Joe have already conditioned us to expect the worst. So imagine my surprise when it turned out that not only was The LEGO Movie not awful, it was actually one of the best movies I’ve watched this year.

The film follows everyman Emmet Brickowoski, an ordinary construction worker, who one day stumbles upon the Piece of Resistance and is told he might be the foretold “Special” to save the world. Alongside female foil Wyldstyle and knowledgeable wizard Vitruvius, he is thrust into a quest to take down evil tyrant Lord Business (if there weren’t 20+ new Lego sets on shelves to coincide with the movie’s release, I would call the film anti-big-business), who is planning to control the Lego universe with his mysterious superweapon.

Yes, the plot is cliché, but it is soon obvious that it is meant to be. At the helm of The LEGO Movie are Phil Lord and Christopher Miller, and they give every moment of the film the same self-referential, satirical slant prevalent in their 21 and 22 Jump Street films. It works like a charm, and since distributor Warner Bros. owns the rights to innumerable film franchises, Lord and Miller have all the material in the world to satirize (they do perhaps the best job with DC characters like Batman and Green Lantern, but they have fun with them all).

The satirical humor is also accompanied by constant sight gags, great one-liners and fun characters, and the result is absolute hilarity. The film adopts a mile-a-minute comedic style a la the best work of David Zucker, and I can say with almost absolute certainty that you’ll catch new gags here with every new viewing. The blink-and-you’ll-miss-a-joke technique guarantees that a smile will never leave your face for LEGO’s 100-minute running time.

I would recommend the film based on its humorous qualities alone, but it turns out it’s got even more going for it. The animation style is absolutely beautiful, and the detail put into every frame of the film makes the entire thing a joy to watch. The action sequences are downright magnificent and are more exciting and gripping than most summer blockbusters’ multimillion-dollar money shots. I often deride CGI for being cold and soulless, but The LEGO Movie is an example of how to use the technology for something stunning.

Wait, and the movie is heartwarming? And it preaches positive messages about the power of imagination, being yourself, and not becoming a slave to conformity? And its plot contains more twists and turns than most adult films? And it features Will Arnett voicing Batman? Is it just me or is this a pretty decent contender for a best-films-of-the-year list?

I’m notoriously wary of watching children’s films; even when people my age gush over a new one, I usually assume it’s just because they’re watching it through a nostalgic, Disney-childhood lens (I still haven’t watched Frozen for that very reason). But I’m glad I forgot all that and watched The LEGO Movie because it’s legitimately pretty fantastic. While the Danish company could have easily just produced a 100-minute advertisement for their building blocks, they instead lent their name to the best animated film since Toy Story 3.