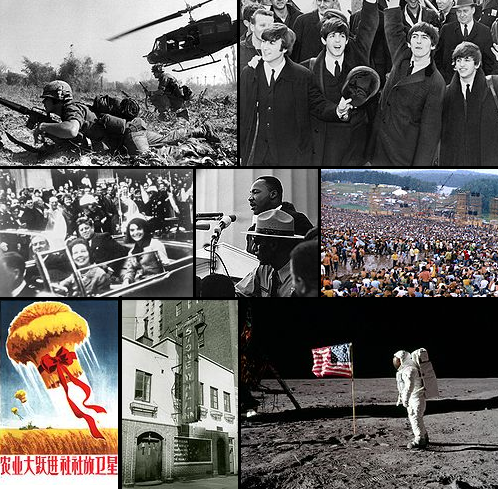 Nothing in fashion is really ever new. Most of the time, it is just a cyclical repetition with a seemingly modern twist. Lately, I’ve seen a lot of allusion to prior decades within different aspects of the fashion world. There have been countless exhibitions, trends, events, articles and photo spreads addressing this point with the remaining question of why we are so nostalgic towards decades past rather than moving forward. Recently, I came across the September issue of Porter magazine, Net-a-Porter.com’s print magazine. Their editorial spreads were inspired by the fashion of the 60s, 70s and 80s complete with an article titled “Have you found your style decade?” This idea of “decade dressing” has become a huge phenomenon among style stars such as Alexa Chung and Sophia Coppola, whose personal style has a basis within a certain decade (the 60s and 90s respectively). A quote by the magazine states that “decade dressers have effectively liberated themselves from choice conundrum by choosing a stylistic curve that speaks of romance, escapism and individuality.” Decade dressing is an interesting idea because it allows you to pull inspiration from a past time and mold it around your own personal style. Personally, I find myself doing just that – I have become very inspired by the 70s bohemian rocker style with the free spirit of the 90s.

Another example of this “style nostalgia” as I like to call it is The 50s exhibit at the Palais Galliera in Paris, showcasing French fashion from 1947-1957, featuring the work of haute couture designers such as Dior, Balenciaga and Chanel. Grace Kelly and Brigitte Bardot serve as style icons from that era in their iconic Fifties frocks. The Fifties brought structured silhouettes and full, lady like skirts to the table that have been carried effortlessly to the modern era. It was an experimental era for many designers who challenged the super structured conventions of the garments in favor of a more voluminous, flowing garment. Much of what is seen in the Fifties can be seen today in the midcalf skirts grazing the runways and the streets worldwide.

Another example, but perhaps less prevalent, is the Nahant Victorian Dance Weekend that happened a few weekends ago in Massachusetts. As photographed by Bill Cunningham of The New York Times, the guests were decked out in authentic Victorian dress and accessories for a weekend resembling an event that would have taken place over a century and a half ago. Proceeds from the event go to preserve the small, historic town of Nahant. The Nahant Hotel was a choice destination for wealthy Bostonians prior to the Civil War. As Cunningham comments in his “On the Street” video, the atmosphere looked like something out of a Monet or a Renoir painting. People get excited because it is an escape from the present towards something from the past, when times were much simpler where frolicking in fields of Queen Anne’s Lace was all anyone had to worry about

Click to watch Cunningham’s video covering the style of the Nahant Vintage Weekend.

And as we have all seen in more forms than one, the 90s seem to the be the style decade that has our attention going into the fall. From the return of the Birkenstock to the signature dark lips, the 90s have made a comeback in both fashion and beauty. The girly grunge of the decade is seen in the dark based floral maxi dresses with the plaid flannel shirts. Not only is it coming back in fashion, it is making appearances in the new sounds of music today. Take Banks for example; the newest up and comer in music nods to 90s R&B in her Lana-Del-Rey-fused-with-Lorde tunes. When analyzing the decade as a whole, we as consumers and designers are trying to reinvent the 90s into finding the best of the decade and glorifying that rather than the entirety of the decade.

My last example to prove that we are decade obsessed is this spread from New York magazine, where photographer Bobby Doherty inserted high end fall fashion items into stills from classic films. When viewing, it is unbelievable to see how much of the fashion for the fall alludes to trends of the past. It is as if the clothing could fit right into the era in which each movie was filmed. It also shows that not one decade has served as the sole inspiration for fall; like Porter magazine showcased, designers are anywhere from using the 50s to the 90s as their decade of inspiration.

The question then remains: why are we so nostalgic towards style decades prior? Here’s the simple answer: because without the inspiration, we have nothing to propel us forward. Cutting edge fashion has hit its height; its height being the midst of the 20th century. The revolutionary changes happened already from the ides of the flapper woman to the “New Look” to Twiggy and the mod Sixties to and bohemian style created in the 70s. Designers weren’t afraid the risks to challenge the conventions of fashion. We look back too much instead of looking forward. While it’s great to take inspiration from the past, we should be using elements to create a modern idea, not one that is a revamped version of something that happened 50, 60, even 100 years ago! We have a serious case of style nostalgia and it is doing nothing to propel us forward when it comes to new, innovative ideas in the fashion industry when all we keep doing is looking back.

For more, check out theworldaccordingtofashion.wordpress.com