When in Ireland, Make the Leap 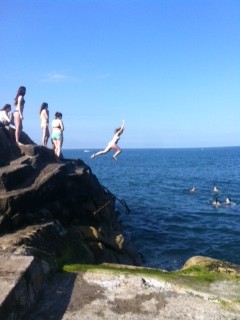 I think the moment I saw a Ferris wheel in Ireland was the first time I’ve truly ever felt happiness.

I’m joking, of course. If you know me, you know that I’m a sucker for carnivals: the creepy music, the kids nearly killing each other in bumper cars, the middle-aged operators who wink when you board a ride meant for small children. Pretty magical, right?

There’s a carnival in Dun Laoghaire (pronounced “Done Leery”) and it’s so reminiscent of America that I forgot for a moment that I was 3,000 miles away. I even saw a Texas flag hanging in someone’s backyard, which made me miss the overbearing southern pride I used to come across back in the states. Dun Laoghaire is such a wonderful place, and we had a grand old time wandering down the pier and eating frozen yogurt on the rocky beach.

There’s also an area called “The Forty Foot” in the town, which is basically this giant rock that people jump off of into the freezing waters of the Irish Sea. It’s not really forty feet high, but it’s still not the safest thing in the world considering the rock is slippery and there’s always a nagging thought in my head that tells me there are sharp, pointy rocks hiding underneath the water.   At the same time, cliff jumping has always been something that I’ve wanted to do, and I leapt at the chance to cross something off of my bucket list.

So leap, I did. 3 times, actually (see terrifying photo to the right).

That night, we returned home on the train with our bellies full of some of the best bar food we’ve ever had (salmon and mashed potatoes—yummm) and headed over to a local jaunt to watch the World Cup.

The next day provided even more strenuous physical activity: hiking in Glendalough (I pronounced it “Glen-duh-loo to my coworkers this morning and they laughed at me).   It’s a 2-hour bus ride up to the Wicklow Mountains, and my bad planning included me not applying sunscreen before I left.  As we hiked up the thousands of steps to the peak, my skin baked red as a lobster around the distinct outline of my tank top.  Now, I look like a broiled zebra. That’s an image.

Planning.  It’s something I’m usually very good about, considering the anxiety I feel when something isn’t ready or complete, but ever since I’ve been in Ireland all I want to do is relax and be spontaneous. It’s probably a good change in me, despite the fact that plane tickets do tend to rise in price when you wait until the last minute to book them…yeah, they don’t care so much about spontaneity. They just love money.

On that note, I’ll pass on a lesson that I learned this weekend: book plane tickets months in advance, bring water everywhere you go, and don’t be afraid to spend money on things you really want to do. I’m going to attempt to be prepared this week and try to book tickets to Scotland as well as a music festival in July, and we’ll see if I have enough determination to get those things squared away. Or maybe I’ll just relax some more.

For more, go to GlassesGirlGoesAbroad.blogspot.com