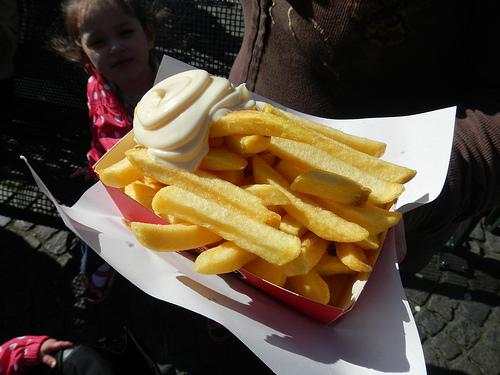 Yesterday, someone told me they thought an american accent was “musical”.  I was, in a word, appalled.

Maybe you think I’m being too harsh on Americans, but I tend to always think that our voices are plain or rough-sounding.  I think Irish accents are wonderful, and they’ve been lovely to listen to the whole time I’ve been here, but perhaps Dubliners don’t register them as such.  Perhaps it depends on the person or how well you listen, or maybe it’s just in the eye of the beholder.  Or, well, the ear.

I know that’s a strange thing to notice– accents– but for me, everything that’s different is a novelty.  I think that’s the stage of culture shock right before the actual oh my god what I am doing here I must go home immediately shock, so I’m looking forward to that coming up next (not).

I also know that Dublin is probably very similar to most bustling American cities, but for now, it doesn’t feel that way.  At this point, everything seems like such a drastic change. For example, mayo is milder, and you eat it with french fries covered in vinegar (which is an actual yum, but I think I’ve mentioned that already.  Have I?  It’s just so good.  Get ready for me to mention it 1,000 more times)  People say “plait” instead of “braid”, “cheers” instead of “thanks”, and “grand” instead of “great”, and they curse like sailors even in the workplace. Wild-berry Skittles unfortunately are not as good, and I think it’s because they’re made with less sugar (which is a TRAVESTY).  The sun doesn’t set until 10:00 pm.  Dogs are tiny and NEVER leashed, and pigeons share their territory with annoying squawking seagulls.

I keep making jokes about my American-ness to anyone who will listen, like how I always want large portions of things and am loud on the bus.  What I didn’t really realize, though, is that stereotypes are stereotypes no matter where you go, and just like rational minds in the US, people try to avoid believing everything they hear here.  In fact, a lot of Dubliners love Americans, and I’ve noticed so much how people on the street, coworkers, and shop workers all want to help me on my journey here.

And speaking of coworkers, I’m also finished with my first week of work at The Writer’s Guild of Ireland (and don’t worry, I’m writing this on my lunch break).  It’s been an interesting experience thus far, mostly because I’m learning all about the Irish film industry and it’s a side of writing I’ve never really explored before.  It’s all independent work so far as well, but then again, I tend to prefer that sort of thing.

Yesterday, the sun came out, and I guess that doesn’t happen very often since everyone in town flipped out and ran away from work.  My boss took the day off and advised everyone to do the same just so that we didn’t waste a rare day of sun in Dublin.  Of course, used to the beauty of Colorado, I stayed and worked like the diligent intern I am (har de har).  I did think it was funny, though, considering we’d never leave work for the 300 sunny days of the year we get back home.  It just shows how much the Irish value craic (that just means fun- nothing fishy).

After work, a couple of friends and I did find some time to enjoy the sun as well.  We met up at a grocery store after work and grabbed some hot sandwiches, and then went down to a park called St. Stephen’s Green where all the students hang out. We sat on the grass, took off our shoes, and threw sandwich crumbs at fat birds.

A group nearby played guitar and the sun was streaming through the trees, and it was just one of those perfect evenings where you thank yourself for having the guts to try something new and to go somewhere that might be scary or far away.

For more, check out GlassesGirlGoesAbroad.blogspot.com!