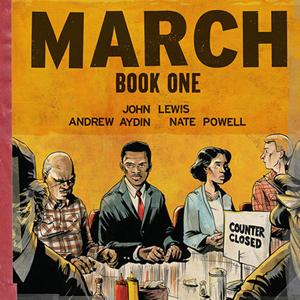 Andre the Giant: Life and Legend by Box Brown

Box Brown, a veteran cartoonist on the webcomic scene, recently released his graphic biography about the legendary wrestler, Andre the Giant. It explores Andre’s life from boyhood to stardom, his fight with Blackjack Mulligan and how colossal his hands were when he held a beer bottle. It includes anecdotes from people who worked with him, from Hulk Hogan to his co-stars in The Princess Bride. I only remember him fondly as Fezzik, the giant in The Princess Bride, so I am looking forward to learning more about his life.

One of the many benefits of blogging for the Collegian is trying to find comics that readers (me included) may not know about. That’s when I stumbled upon Rat Queens. Nominated for an Eisner in the Best New Series category, it follows a group of rowdy and crude female mercenaries. It has violence, booze, and kickass ladies—what more can you ask for? And now as it is about to be on its 6th issue, summer is a perfect time to catch up.

This powerful memoir follows John Lewis, an African American Congressman and one of the famous “Big Six” most influential leaders during the civil rights movement. Part of a three book series, Book One follows him through his childhood in rural Alabama and his personal struggles with civil and human rights. Similar to Martin Luther King and the Montgomery Story comic book published in the fifties, John Lewis is reminding a new generation the horrors of the past to make a better future.

I never knew Stan Lee wrote for DC until last week’s article so finding these series was a real treat. I honestly don’t know where to start. An African American Batman is seeking vengeance on a gang leader for killing his policeman father. A lady Flash longing to become a superhero is given a second chance when her father injects her with DNA from a humming bird to hopefully cure her life-threatening disease. Marine Biologist Aquaman that can transform into water! All I know is I want to read them all.