The Rocky Mountain Collegian • May 8, 2014 • https://collegian.com/articles/news/life2/2014/05/dr-stuart-tobet-advice-and-advances-in-research-at-colorado-state-university/ 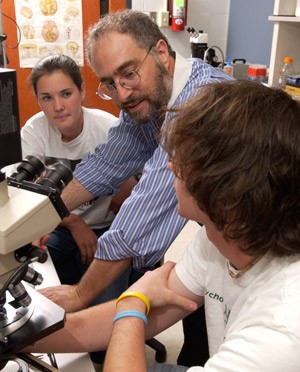 Dr. Stuart Tobet, is a professor in the Department of Biomedical Sciences and the Director of the School of Biomedical Engineering. He moved here from Boston in 2003. He is very interested in neurobiology.

He was first intrigued by the prospect of neurobiology when he graduated high school. He received his first taste of a neurobiology lab during college as a second semester freshman at Tulane University. His long abiding interest lies in determining what occurs in early development to change the way an individual behaves. Stu started with the question, “what causes people to be different”.

Stu’s first experience with trying to answer the behavioral question was an experiment in prenatal stress. It led to a lifetime of enthusiasm for his job. He is still trying to answer the question of what happens during early development to influence behavior later in life. He originally started with experiments in a psychology department. Today his research at Colorado State University focuses on the brain chemistry experienced by individuals that could determine their behavior. Stu told me, “The secret to understanding the original question comes down to cells talking to each other.” So the secret is finding out how. Research which examines cells for behavioral answers has been a growing trend over the past 35 years. Stu’s research is currently looking into why females and males behave differently. Something he would like to point out to readers would be that “estrogen” refers to a family of compounds, and not one hormone. Both sexes produce a variety of estrogens. Dr. Tobet wants to know to what extent these compounds affect cells in the brain. This should let him figure out how cells know where to be and how to behave in a mature individual.

Dr. Tobet has worked with engineers, chemists, mathematicians, and others to improve the tools used to examine cell communications and behaviors. One resolution currently used is about 10 to 30 µ (microns). This is approximately the size of a cell’s diameter. The lab is developing tools to look at the sub-micron level within three months. Randy Bartels in the department of Electrical and Computer Engineering and the School of Biomedical Engineering has been working with Stu on this project. Tom Chen, Chuck Henry, and Melissa Reynolds are faculty in other departments as well as members of the School of Biomedical Engineering. They have worked to help create and characterize a “biosensor” chip with 8,192 electrodes driven by an on-chip potentiostat. The potentiostat allows different voltages to be used across the electrode surface. This allows the team to oxidize molecules differently across the device. They can do over 8,000 measurements, virtually in parallel, on cells that are part of tissue slices that mimic functions inside the body. CSU, so far, has the only device with this large an array of electrodes in the world.

The School of Biomedical Engineering, with CSU, is working on crowd funding ideas to support science projects like the biosensor chip. The site functions as another way to let people know what projects are going on at CSU (http://www.engr.colostate.edu/sbme/charge/?cfpage=project&project_id=8988).

Stu told me, “I tell every undergraduate that comes to me about research, that it’s something I started when I was a freshman. The work I did [as a Junior and Senior] was eventually published.” Motivation and persistence, according to Dr. Tobet, are really the difference between success and failure. What he wants every student to answer for themselves is whether the work they do entrances them, or leaves them feeling dry. He often tells students interested in lab work to go to a site called pubmed and look at topics that interest them. He encourages students to find what they want to do by exploring subjects they want to learn more about. Then they should look back and see where they spent most of their time on the site. Stu is still excited to answer the question, “what causes people to be different” and encouraging students to find the question that drives them.