The side effects of smoking alcohol 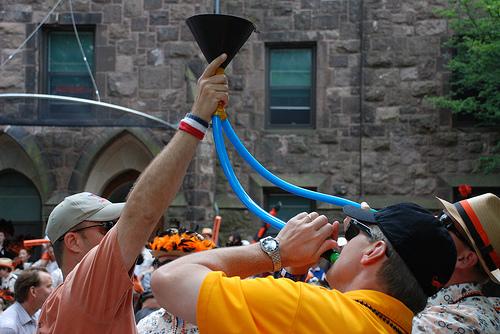 A new trend of inebriation, called smoking or inhaling alcohol, is emerging.

Smoking alcohol may sound at first like a creative and fun way to get drunk. The quest for the next best party technique is hardly new. Keg stands, beer bongs and fermenting alcohol from fruit in the fridge are just some of the many examples of adventurous individuals looking to have a good time. But, smoking alcohol is no keg stand.

To be clear, alcohol in any form is an addictive and dangerous substance that merits a level of caution in all situations. This is in no way endorsing binge drinking, the negative health effects of which are well documented.

But, even binge drinking is comparatively less risky than smoking alcohol. When alcohol is consumed in liquid form, it passes through the intestinal tract. The stomach and small intestine slowly absorb the alcohol over a matter of hours, depending on how much food is in the stomach, the speed of drinking and other factors.

If you drink too much in too short of time, you will likely throw up, with the possibility of passing out and/or dying from alcohol poisoning — excess has consequences.

But, vomiting or having one’s stomach pumped can stop the bleeding, in a matter of speaking. The input of alcohol into the bloodstream is stopped, and the body will eventually sober up, assuming you haven’t died.

When alcohol is inhaled, it goes through the lungs and directly into the bloodstream. This means that there is no proverbial bandage with which to aid recovery. You can’t puke out an inhalant. If you pass out and call an ambulance, there will be little to nothing they can do to alleviate the problem.

“I don’t think I would ever try doing that,” said Taylor Cason, sophomore health and exercise major. “It doesn’t sound all that fun or worth it to me.”

Some may counter by saying that as long as the dosage can be controlled, the fear of death and addiction is considerable lessened. But, can you control the dosage?

Think about when you normally drink. How well do you modulate drinking alcohol? Ever missed the mark drinking at a party? Ever gone out with the intention of getting tipsy and ended up blacking out?

You probably have, and that can be remedied. But, while the consequence of smoking alcohol could be waking up with a hangover, you also might not wake up at all.

Collegian Editor at Large Zack Burley can be reached at community@collegian.com.